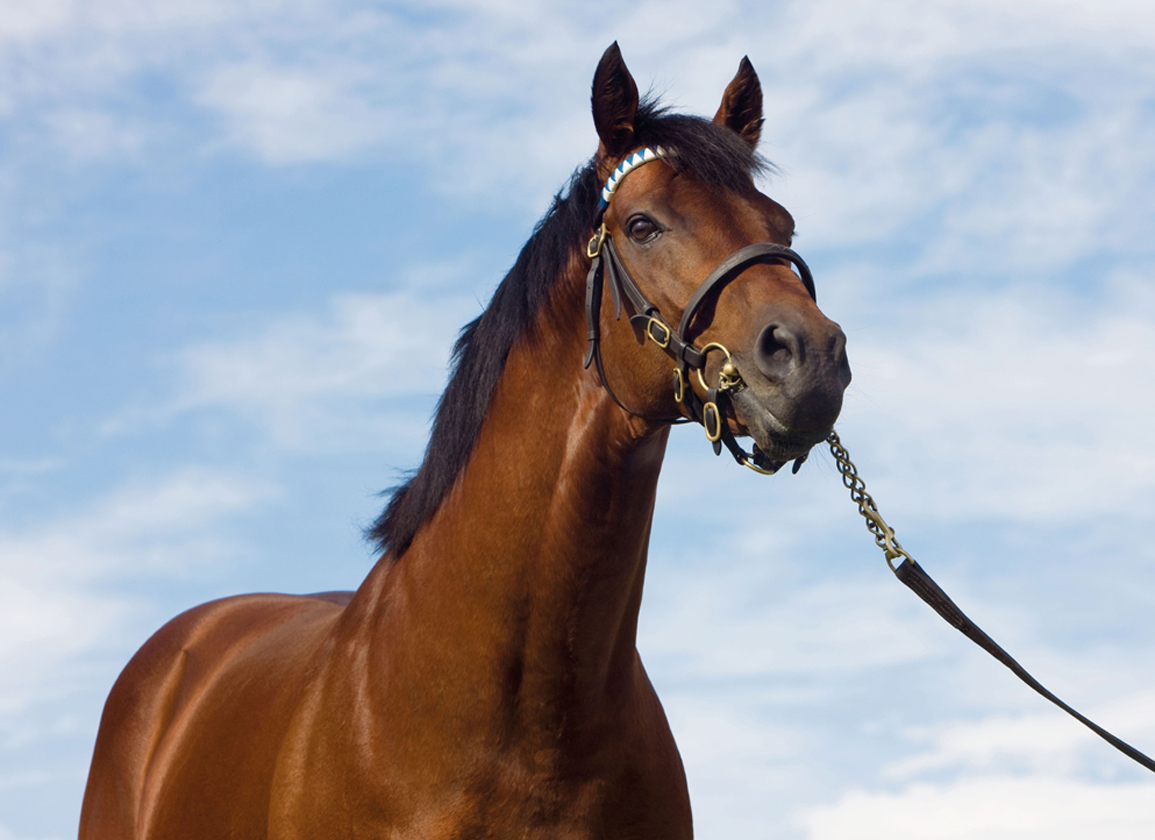 Strip away the brass name plates, parade the Darley stallions in front of seasoned horsemen and ask them to pick the horse who last year sired three Breeders' Cup victors among 38 stakes winners and was the broodmare sire of the Derby winner. Of those who haven't seen him before, it is unlikely that many would choose Dubawi (Ire).

Unlike his sire, the brilliant but ill-fated Dubai Millennium (GB), he is not a horse who 'fills the eye' with those long classic lines and fluent stride. On the short side and fairly close-coupled, with a habit of growing a coat as thick as a native pony in midwinter, Dubawi is not your archetypal elegant Thoroughbred. But those same seasoned horsemen will doubtless have seen enough in their time to know that when it comes to racing and breeding, handsome is as handsome does. And Dubawi does it all.

That started on the racecourse. An unbeaten juvenile who became his sire's first stakes winner in the G3 Superlative S. and went on to land the G1 National S., Dubawi then graduated to his Classic season with a warm-up fifth in the 2000 Guineas before winning the Irish equivalent. The Derby distance proved too much for him, but he was not disgraced when third to Motivator (GB) and Walk In The Park (Ire). Dubawi then emulated his sire by winning the G1 Prix Jacques le Marois, and signed off by finishing second to Starcraft (NZ) in the G1 Queen Elizabeth II S.

Since then, he has spent all bar one of the Northern Hemisphere seasons at Dalham Hall Stud in Newmarket, while he also made three visits to Darley Australia in the early years of his second career. As his 20th birthday approaches on Feb. 7, Dubawi is rightly revered as an outstanding stallion, a burgeoning sire of sires and broodmare sire, and the main conduit of the Mr Prospector line in Europe, making him a more-than-useful mate for mares from the dominant Northern Dancer lines. For four years, he was accompanied on the Darley roster by another son of Dubai Millennium, the €1.2 million yearling purchase Echo Of Light (GB), who died in 2012.

“With one of his two stallion sons, the great Dubai Millennium has delivered for us, and that means everything,” says Sam Bullard, Darley's director of stallions.

“Now we want sons of Dubawi to be successful. Night of Thunder has got off to such an incredible start, and Time Test, Zarak and others doing so well is testimony to the horse. We are very fortunate that we've got horses like Ghaiyyath, Space Blues and Too Darn Hot all coming through on the roster.”

The first foal of his dam, the Italian Oaks winner Zomaradah (GB) (Deploy {GB}), Dubawi was born at Kildangan Stud, where he later stood one season, and he hails from the same family as a sire who was already ensconced in the Kildangan stallion unit at that time, the Breeders' Cup Turf and Coronation Cup winner In The Wings (GB). More pertinently, though, he was also one of a small number of foals expected that year by Dubai Millennium.

Sheikh Mohammed's pride in his homebred so prophetically named to win the Dubai World Cup of 2000 was renowned. Dubai Millennium's racing record was hugely impressive. He was beaten only once in ten starts when finishing ninth behind Oath in the Derby, and on what would transpire to be his final performance in the G1 Prince of Wales's S. at Royal Ascot, the applause started ringing out when he was only halfway up the straight, so emphatic was the manner of his victory. But a little over six weeks later his racing career was over when he suffered a hind-leg fracture on the gallops. Brutally, Dubai Millennium's stud career was even more brief when, during his first covering season, he was struck down with grass sickness and died on Apr. 29, 2001.

“The whole stallion operation at Darley was set up on the back of Dubai Millennium really,” recalls Bullard. “We had this wonderful racehorse, the greatest horse that Godolphin had ever had, and when he retired to stud that was the catalyst really for the stallion operation that is here now, and always the number one goal was to get the top stallions of tomorrow.”

Clearly, those mares to have visited Dubai Millennium before his untimely death were of a decent calibre, but the odds were stacked against him making a meaningful impression on the breed when the foaling season of 2002 was complete and his sole crop numbered just 56. Sheikh Mohammed set about buying up a number outside those bred by his operation, but ultimately it was a homebred who would become not only Dubai Millennium's best son, but one of the best stallions in the world.

Most importantly, Dubawi's influence is now growing through his sons. He stands alongside five of them on the Darley roster: Ghaiyyath (Ire), Too Darn Hot (GB), Night Of Thunder (Ire), Postponed (Ire) and the recently retired Space Blues (Ire). And up to 20 sons of Dubawi are at stud around the world, including in America, Japan and India.

Night Of Thunder, his second 2000 Guineas winner, was the champion first-season sire in Europe in 2019, while the Aga Khan Studs' Zarak (Fr) led the French freshmen last year, and the National Stud's Time Test (GB) was another young son to make a favourable impression with his first runners in 2021.

A top-five finisher in the stallion table in each of the last nine years, and on four occasions runner-up to Galileo (Ire), Dubawi had to settle for third in 2021 when Frankel (GB) nudged his own sire down a slot to second. But Dubawi's 54% winners-to-runners strike-rate was higher than both Frankel and Galileo, and was a figure that only his son New Bay (GB) could match in the top 50 stallions in Britain and Ireland. On worldwide earnings for last year he was at the top of the table, those lucrative Breeders' Cup victories no doubt helping in this regard.

In his 39 years with Darley, head stallion man Ken Crozier has worked with both Dubai Millennium and Dubawi and describes the horse now regarded as the king of the stallion yard as “straightforward, uncomplicated, a hard, gutsy horse”.

He continues, “When Dubawi first arrived here, he's obviously physically a very different animal to his father, but he was coming in as a Classic winner with a high profile and I guess we had high expectations given that, sadly, Sheikh Mohammed and Darley had lost Dubai Millennium so young.”

While Dubai Millennium's short stud career was beset with illness from an early stage, the only concerns Dubawi ever gives those looking after him is how to keep him trim.

Crozier adds, “We have him on shavings. He would eat everything in sight. He gets fed a little and often. He will get fed hay three times a day because he would eat a bale of hay in a half an hour. So that's the only problem we have with Dubawi, keeping the weight off him.”

Even within the sons of Dubawi just on the Darley roster, it is easy to see that he is not a horse who stamps his stock in the manner of his old friend and rival Shamardal.

“They come in all shapes and sizes,” agrees Bullard. “You can't look at them and say, 'I can see Dubawi in that'. But what you can't see is what's between their ears, and that is consistent with all of them. They just have these extraordinary temperaments, he really does pass that on.”

Darley's head of nominations Dawn Laidlaw has, like Crozier and Bullard, worked with Dubawi throughout his stallion career and has witnessed the change in attitude towards him.

“I think every breeder, agent and ourselves would be honest enough to say that we probably didn't see the success of Dubawi coming in those early days,” she says. “Obviously he was a great racehorse by a fantastic stallion, so he had a special place in our hearts from the beginning. But I think it would be fair to say that people didn't necessarily take to his early progeny. I mean, everybody's seen him and he's a little bit on the short side, a little bit dumpy, not the greatest walker. I think initially that's what people thought about his yearlings. I think right until they started running, and it was when they started winning that people very quickly realised he was a special stallion.”

Dubawi's first crop included the 2000 Guineas winner Makfi (GB), who, in an example of the blossoming of the line, sired the G1 Poule d'Essai des Poulains winner Make Believe (GB) in his first crop, who in turn is the sire of G1 Prix du Jockey Club winner Mishriff (Ire) from his first crop. Along with Makfi in the class of 2007 were the Group 1 winners Lucky Nine (GB), Poet's Voice (GB), Dubawi Heights (GB), Monterosso (GB) and Prince Bishop (GB), as well as the Group 3 winner and Irish 1000 Guineas runner-up Anna Salai (GB), who would later become the dam of Adayar (Ire) (Frankel {GB}).

Among his 142 Group winners, Dubawi is now the sire of 48 Group/Grade 1 winners–six of those having come from his three stints down under–with the group including the 2020 Horse of the Year Ghaiyyath. From an opening fee of £25,000, he stood his fourth season at £15,000 before gradually climbing to his fee of £250,000 for the last six years, making him the most expensive stallion in Europe.

“It's very typical in a stallion, and his third and fourth years were a little bit more difficult to sell,” recalls Laidlaw. “Even the best of stallions usually go through that dip. Then as soon as he had his winners, he just absolutely took off. One of the most difficult things since then has been selecting the mares. There's always an upper limit on the numbers he'll cover, so unfortunately every year there have been mares that we would have loved to have that haven't always been able to come to him. The quality of mare that comes to him every year is fantastic. It's like a who's who of the broodmare band in Europe and beyond. We're lucky to have him and I say that every day.”

The sense of pride in their star stallion is quite clear at Dalham Hall Stud, where they have now had many years to bask in the reflected glory of Dubawi. Now entering his third decade and about to embark on his 17th stud season, he fortunately shows no waning in enthusiasm for his main task.

“When covering season comes, he will go down to that barn roaring and shouting, whether it's at the 8am covering session or the fourth session at midnight,” says Crozier. “You'll hear him coming. You know, if he was a human, he would have his neighbours round knocking on his door.”

With a reputation so hard earned, Dubawi has every right to shout about it.