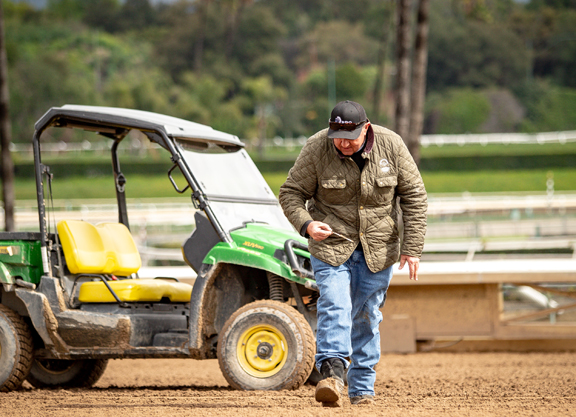 A maiden three-year-old filly broke both front legs at the end of a half-mile workout at Santa Anita Thursday morning and was euthanized, according to multiple published reports. Daily Racing Form was the first to publish the story, quoting her trainer, David Bernstein. Officials at Santa Anita have confirmed the news. The incident comes on the second morning the main track has been open for workouts since closing last week. Around 100 workouts were recorded Wednesday without incident.

“We are perplexed by what has happened and devastated,” Tim Ritvo, chief operating officer of the Stronach Group, told a local FOX-11 news crew. “The track, we have complete confidence in the track, with the greatest track crew in America, and it’s just a devastating time for us.”

The filly, Princess Lili B (Indian Gods), had been unplaced in two starts at long odds. She was the 22nd reported fatality at Santa Anita since the winter meeting opened Dec. 26. The main track had reopened Monday morning, March 11, for jogging and galloping, while workers were limited to the training track until Wednesday morning. Under new safety protocols announced last week, trainers must provide 24-hour advance notice to track officials if they intend to work a horse in order to give track veterinarians time to identify possible at-risk horses through physical exams, workout data and past performance information.

After horses returned to the main track track Monday, racing secretary Steve Lym told the TDN’s Dan Ross, “Right now, the track is in really good shape. Our track guys are happy with it. Trainers of the horses that went on it (Monday) morning are good with it.”

The track had been expected to re-open for racing on March 22. Santa Anita is expected to make an announcement before 3 p.m. Eastern Daylight Time.