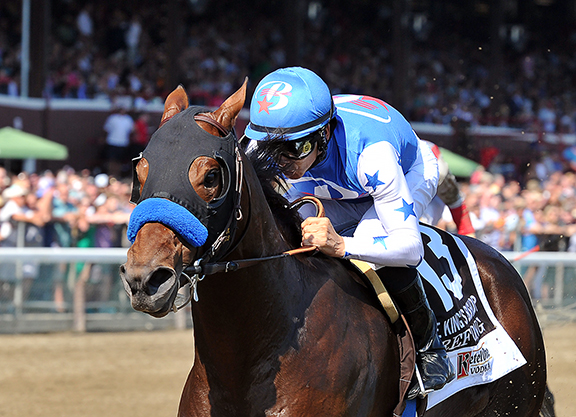 Baoma Corporation's Drefong (Gio Ponti), last year's Eclipse champion sprinter, returns to the races in the GI Bing Crosby S. at Del Mar Saturday. The once-beaten bay, tabbed a 'TDN Rising Star' after a 9 1/2-length maiden romp at the Bing Crosby's six-furlong distance at Del Mar in November 2015, was last seen cementing his championship season with a 1 1/4-length victory in the Nov. 5 GI Breeders' Cup Sprint. Illness derailed an expected trip to Dubai this past spring, but with a string of three straight six-furlong bullet drills under his belt, Drefong should be ready to roll in this 'Win and You're In' event for the Breeders' Cup Sprint.

Hronis Racing and trainer John Sadler recorded an historic upset last weekend at Del Mar when Accelerate (Lookin At Lucky) overcame superstar Arrogate (Unbridled's Song) to win the GII San Diego H. The team returns this Saturday with longshot Moe Candy. The lightly raced 5-year-old has been off since his runner-up effort in the Kona Gold. He was also runner-up in the Feb. 4 GII Palos Verdes S. In between those two starts, the gray 5-year-old was sixth behind Whitmore (Pleasantly Perfect) in the Apr. 15 GIII Count Fleet Sprint H. at Oaklawn Park.