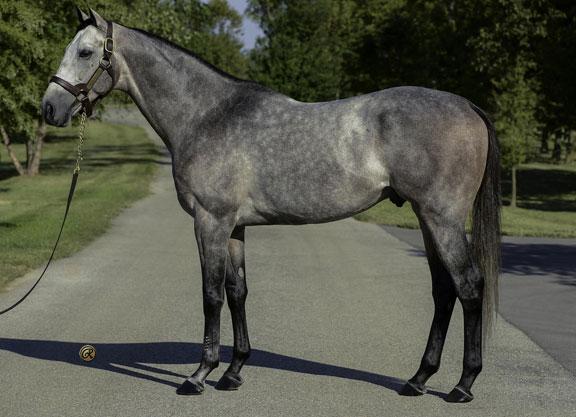 5th-CD, $46,918, Msw, 5-3, 2yo, f, 4 1/2f, :52.83, ft.
DREAMING DIAMONDS (f, 2, Cross Traffic–Xunlei {SW, $134,876}, by D'wildcat), purchased privately off a debut third behind the Ward-trained Stillwater Cove (Quality Road) at Keneeland Apr. 8, became the initial winner from the first crop for her sire (by Unbridled's Song) with an open-lengths success Thursday at Churchill Downs. Transferred from trainer Tracey Young to Tom Amoss, the bay was bet into 12-5 favoritism and jumped alertly from the inside box and engaged in a three-horse battle for the early lead. Going well approaching the exit to the turn, she was kicked further in front by Corey Lanerie, was well clear into the final furlong and came home about four lengths to the good. Cafe Mischief (Into Mischief) was also part of the early battle and held on for second ahead of 5-2 Toy Moon (Malibu Moon), who bombed the start and rallied nicely to round out the triple. The stakes-winning Xunlei was purchased for $25,000 carrying this foal in utero at KEENOV in 2015 and has since aborted twins by Danza. Sales history: $1,000 Ylg '17 FTKOCT. Lifetime Record: 2-1-0-1, $34,800. Click for the Equibase.com chart or VIDEO, sponsored by Fasig-Tipton.
O-Rob Auerbach & Marc Winston; B-JRita Young Thoroughbreds LLC (KY); T-Thomas M Amoss.