Don't Forget the Other Name on the Ticket 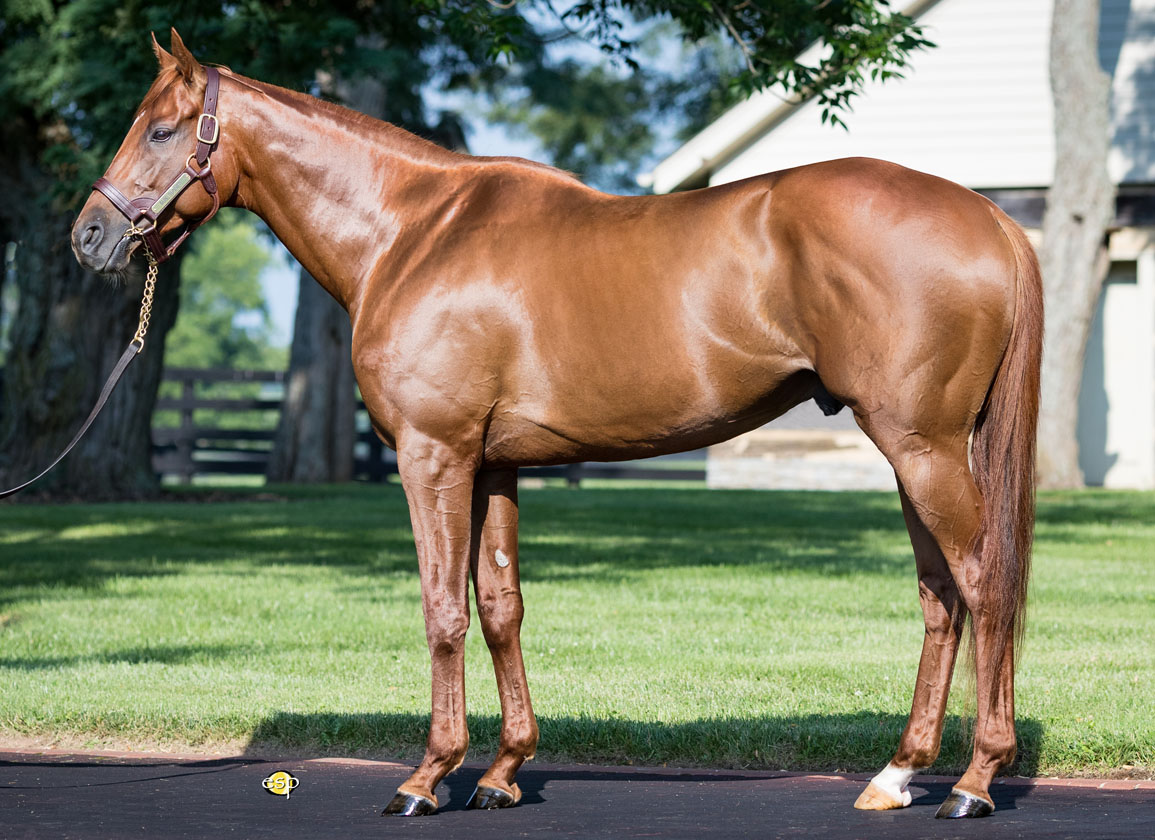 Most of us have voted early, and voted often, when it comes to the biggest impact recently made by a new stallion–and now, it seems, we've celebrated his official inauguration. Because a Classic winner for Gun Runner rounds out the narrative that so excited everybody last year, when his first juveniles showed such startling speed and precocity relative to his own Horse of the Year campaign, around two turns as a 4-year-old.

Sure, Gun Runner himself managed to win his first two (of three) juvenile starts, and then added the two big Fair Grounds trials before making the GI Kentucky Derby podium. But it was only in maturity that he reached his full potential, streaking through five Grade Is by an aggregate 27 1/2 lengths. Given the many Classic influences in his pedigree, then, he was surely only getting started when a GI Hopeful winner and champion 2-year-old filly contributed to a first-crop earnings record of $4.3 million. Sure enough, this spring Gun Runner had already followed through with winners of the GI Arkansas Derby and GI Santa Anita Derby, and now Early Voting has sealed the deal in the GI Preakness S.

We know that a ruthless price is exacted from young stallions if failing to capitalize on the one opportunity they tend to be given by commercial breeders, and even Gun Runner–despite having absolutely lived up to his billing at the yearling sales–was trimmed by Three Chimneys last year from $70,000 to $50,000, just to keep him in the game pending the launch of his first runners. But while many peers have meanwhile begun the usual, inexorable slide, he had already been hoisted to $125,000 for this spring and has been quick to reassure investors that his advent among the elite will be as lasting as it has been unmistakable.

By this stage, then, nobody still needs to be told that Gun Runner is a landslide success. But let's not forget the second name on the ticket. Because the other half of his genetic equation is certainly going to assist Early Voting, as and when he gets the chance to open up the next frontier for Gun Runner–as a sire of sires.

Pitch it short or drive it long, Early Voting's maternal family will sit very prettily in a stallion brochure. His dam is a Tiznow half-sister to an outstanding stallion in Speightstown; and full sister to a highly accomplished runner in the tragic Irap. And the quality of this dynasty–which eventually unspools, as seventh dam, to the Virginia matriarch Hildene–can be judged by reminding ourselves that Speightstown, though a first foal, brought $2 million as a yearling.

The line admittedly tapers pretty thinly by the time it reaches Hildene, foaled in 1938 and a foundation mare at Christopher T. Chenery's Meadow Farm, eventually famed for the nativity of Secretariat. Though Hildene (like her first two dams) was mediocre on the track, and apparently a bleeder, her five stakes winners included Hill Prince, Horse of the Year in 1950; and First Landing, champion juvenile of 1958.

First Flush was one of Hildene's less distinguished foals, unplaced in a light career. But if that seemed unsurprising in view of her paternity–her sire had won steeplechases in France–the fact is that she went on to prove a fertile source of stakes performers and/or producers. These included Copper Canyon, whose sire Bryan G. had been selected after coming up with triple champion Cicada from one of First Flush's half-sisters. Three of Copper Canyon's daughters would go on to produce Grade I winners, including an unraced daughter of the great Buckpasser named Insilca who delivered GI Turf Classic Inv. scorer Turk Passer (Turkoman).

Insilca's daughter by Bold Ruler's son Chieftain, Silken Doll, ran up a sequence of four as a sophomore (crowned with a stakes win) before in turn becoming quite a useful producer. Her foals included a Group 1-placed juvenile (admittedly regressive after) in Britain by Silver Hawk; the dam of GII Indiana Derby winner/GI King's Bishop runner-up Star Dabbler (Saint Ballado); and a Storm Cat filly named Silken Cat, whose three processional wins round Woodbine qualified her as Canada's leading 2-year-old filly of 1995.

Silken Cat, who had been bred in Quebec by Ferme Du Bois-Vert and sold to Sam-Son Farm as a yearling, was at this point acquired by Aaron and Marie Jones but had to be retired after a single sophomore start (and first defeat) in California. Any disappointment was soon assuaged, however, when her first yearling colt, by Gone West, brought that $2 million from Eugene Melnyk. Though Speightstown took his time to repay his investment, at one stage surfacing only twice in 30 months, he put it all together as champion sprinter at six, bowing out in style at the Lone Star Breeders' Cup.

On the face of it, Silken Cat then appeared to produce a series of costly duds. There was a winner in Malaysia, but that was it. Three never even made the starting gate: a $1.5 million sister to Speightstown; a $1.75 million Tiznow filly; and a colt by Unbridled's Song, plainly unraceable, discarded for just $8,000 as a 2-year-old at the Keeneland November Sale. By the time the very difficult delivery of a Tiznow colt caused her retirement, 16 years after she had produced Speightstown, Silken Cat had burned enough fingers for her final son to fail to reach his yearling reserve at $140,000.

Pinhooker Bobby Dodd did a deal, however, and managed to advance the colt's value to $300,000 at OBS the following March. The very same day, Silken Cat lay down peacefully in her paddock at Taylor Made and died. Her work, albeit protracted and fitful, was done: 11 yearlings sold for over $8.5 million.

Her final bequest, this Tiznow colt, was always campaigned like a talented horse by Doug O'Neill and a shock success in the GII Blue Grass S. showed why. Irap later added the GIII Ohio Derby and GIII Indiana Derby before making the podium in the GI Travers, only to succumb to laminitis that fall.

In the meantime, two of those ostensible “dud” siblings have enhanced their dam's legacy in astounding fashion. The Unbridled's Song colt written off for $8,000 was bought by John McKee, who offered him to West Virginia breeders at Beau Ridge Farm as a half-brother to Speightstown. Fiber Sonde has since accumulated 21 black-type winners, two at graded stakes level, including the 15-for-27 millionaire and Charles Town stalwart Runnin'toluvya.

And then there was that very expensive Tiznow filly, named Amour d'Ete, unraced after her acquisition as a yearling by incoming Three Chimneys chairman Goncalo Borges Torrealba at the 2013 September Sale. Evidently a stunning physical, she apparently suffered a fungal infection in training that nearly cost her an eye. The Three Chimneys team did try to cash her in, with a Super Saver cover at the November Sale of 2016, but in the end held their nerve and retained her at $725,000.

That has turned out to be an inspired gamble. True, her daughter by Super Saver was sold as a yearling for barely a tenth of that sum, at $75,000, and only won a maiden claimer. But how Ten Strike Racing must be congratulating themselves after claiming this filly for $50,000 at Churchill in November! Because she now finds herself half-sister to a Preakness winner.

Things had started to turn round for Amour d'Ete immediately after she was retained at the November Sale, her full brother Irap coming good the following spring. And fortunately her 2019 foal by the farm's rookie stallion Gun Runner (apparently still immature when making $200,000 at the Keeneland September Sale, to join Klaravich Stables) was striking enough for her to be bred straight back.

As a result, Three Chimneys find themselves not only with both the sire and dam of a Preakness winner, but also a full sister–along with several other new shoots on this long-flourishing family tree, Amour d'Ete having otherwise produced only fillies. Her first foal, by Distorted Humor, required patience but did break her maiden stylishly at four; after Early Voting's sister, now two, came a yearling by another recent breakout sire in Constitution; while just last month the farm welcomed a filly by Volatile.

So let's now just take a step back and consider the mating that produced a Preakness winner. Apart from sheer quality of blood–both Gun Runner and Amour d'Ete, after all, are real aristocrats–the first thing that stands out is a nice echo behind Silken Cat, blue hen as she has unmistakably become, and Gun Runner's great damsire Giant's Causeway. Because Early Voting's second dam, as noted, is by Storm Cat out of Chieftain's daughter Silken Doll; and Giant's Causeway, also by Storm Cat, was out of a granddaughter of a Chieftain mare.

While his contribution to the package is plainly limited, Chieftain is a wholesome kind of brand to find top and bottom. Though he never established his own branch of the Bold Ruler line, he was a conduit not just for speed and durability but for some regal genes: he was a half-brother to Tom Rolfe, while their dam was out of How, the Kentucky Oaks winner whose sister delivered Sham.

How sire Princequillo tends to recur in almost any worthwhile American pedigree and this one is no exception. For instance, he also helps to lace together the very familiar pedigree of Quiet Dance, whose mating with Giant's Causeway produced the dam of Gun Runner. (Quiet Dance, of course, also gave us Saint Liam by Saint Ballado.) Quiet Dance's second dam was by a son of Princequillo, while the famously close inbreeding to Dr. Fager in her sire Quiet American was in each case via daughters of Princequillo's prolific producer Cequillo.

Turning to those opposing strands of Storm Cat, his damsire Secretariat–besides being another son of Bold Ruler–introduces more Princequillo through his dam Somethingroyal. For the little it may be worth, moreover, Tiznow's damsire Seattle Song combines a Bold Ruler line with a mare by a son of Princequillo.

Doubtless these are fairly random tints to pick from a complex palette. In broader brushstrokes, however, we can say that Early Voting's prestigious family has had the benefit of commensurate seeding throughout–first four dams by Tiznow, Storm Cat, Chieftain and Buckpasser–and that there won't be a chink in his genetic armor when he goes to stud. His four grandparents are a developing sire of sires in Candy Ride (Arg); a half-sister to Saint Liam; a broodmare sire now up to 29 graded stakes winners, following We the People (Constitution) only the previous weekend; and the dam of Speightstown, Irap and Fiber Sonde.

To me, that's what makes a copper-bottomed pedigree: when all genetic contributors have established their worth through horses other than those who actually put them on the page in front of you.

Gun Runner's first crop has already drawn alongside that of Speightstown, which eventually mustered five Grade I winners. These largely proved typical of Speightstown's stock overall, however, in tending to need time to mature. For his half-sister by another fairly slow burner in Tiznow to have produced a Classic winner, then, certainly attests to the striking dynamism we're seeing in Gun Runner.

But let's not get ahead of ourselves. The previous Preakness winner in Early Voting's maternal line, Hill Prince, was also from his sire's debut crop. As we've just seen in this pedigree, that was the start of a road that led to one of the commanding summits of the modern breed. If Gun Runner can go on and become even half as influential as Princequillo, then he will indeed be looking at greatness.