Home » Archive » Shared News » Do Hollendorfer, Smith Have the Next Songbird?

Do Hollendorfer, Smith Have the Next Songbird? 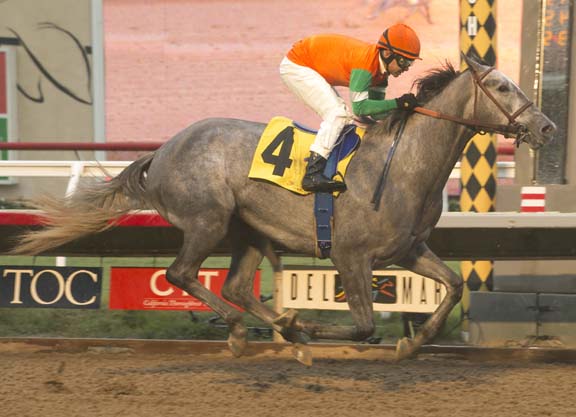 For any trainer and jockey, a filly like Songbird (Medaglia d'Oro) is supposed to be a once-in-a-lifetime proposition. Not so for Mike Smith and Jerry Hollendorfer. They might have another one, one that could be just as good.

Exactly 16 months after Songbird broke her maiden by 6 1/2 lengths at Del Mar, the Hollendorfer team brought another freakishly fast filly to the winner's circle at the seaside oval in second-time starter Unique Bella (Tapit). A Pennsylvania-bred, she won a maiden race Saturday at Del Mar by 10 1/4 lengths and was tabbed a “TDN Rising Star”.

“Ability-wise and as far raw talent goes, I don't know if they get as talented as she is,” Smith said of Unique Bella.

Smith was probably uttering the exact same words after Songbird broke her maiden, her first victory in an 11-race winning streak that includes seven Grade I stakes wins, a 2-year-old filly championship and an impending 3-year-old filly championship. Unique Bella showed the same sort of speed and utter dominance that Songbird displayed in her maiden win, traits that immediately stamped her as a star of the future.

They even cost the exact same amount at the sales. Owner Rick Porter paid $400,000 for Songbird at the 2014 Fasig-Tipton New York Saratoga Select Yearling Sale. The Don Alberto Stable bought Unique Bella for the same price at the 2015 Keeneland September Yearling Sale.

The Don Alberto Corp. is a relative newcomer to the sport in the U.S., but is determined to become a major force. It is headed by Chilean Liliana Solari, the chairwoman of Bethia Holding, which owns, among other things, the Club Universidad de Chile soccer team. Don Alberto made a big splash in 2013 when purchasing the former 417-acre Vinery property in Kentucky.

Team Don Alberto may not have been too pleased when Unique Bella made her first start in a June 23 maiden at Santa Anita. Sent off at 3-10, she broke slowly and finished second.

“The gate was a bit of a problem for her in her first start,” Smith said. “She gets in there and I think she gets a little claustrophobic. That first time, she was squirming and squatting. She's tall and big and we were going five-eighths of a mile and she just broke very awkwardly. She literally spotted them seven lengths before she ever got out of there and got halfway lined out. Then the race was pretty much over. There was a horse alone on the lead and gone and the track was real fast. I made a big beautiful run to run second.”

Rather than rush her back to the races, Hollendorfer decided to take his time with her and work on her quirks. The result was a flawless performance.

“We like to think very positively,” Hollendorfer said. “I will say that Mike likes her a whole lot and thinks she has some very good qualities. The folks working in my barn think the same thing and so do I. You can only take it a step at a time, so that's what we wish to do. If she stays like she is now she should be a pretty nice prospect for the coming year.”

When comparing Songbird and Unique Bella, Smith said the primary difference between the two is that for Songbird the light bulb went on right away.

“I thought a lot of [Unique Bella] early on,” the Hall of Fame jockey said. “In the mornings she might have actually been a little more forward early on [than Songbird]. She was a bit more aggressive than Songbird was the first time I worked both of them. This one has got a long way to go to do what Songbird has done. Songbird was so professional her first time out so far as the gate and everything. The gate opened and, bam, she was out of there. This mare is a little taller, a little slower leaving out of there. Once you let her hit the ground once or twice she's up underneath herself and ready to go. She has room to improve so far as getting race smart and knowing how to handle the paddock and the gate. Songbird was so cool and calm in the paddock and in the gate. This filly is a bit anxious.”

“Jerry does such a great job with these horses,” Smith said. “Once he gets them and gets them right they just reel them off. His record shows it. If Unique Bella matures mentally, she has the kind of ability and raw talent to reel off many in a row, and I'm talking about important races. We're hoping she'll be there on the first Friday in May.”

As for Songbird, Hollendorfer reports that she is resting up at WinStar in Kentucky and that he and Porter haven't set any firm plans for her so far as her 2017 racing schedule goes.

“I've talked to Mr. Porter about a couple of races next year, but we're giving her 60 days off right now,” Hollendorfer said. “She's out in a grass paddock at WinStar and we check on her all the time to make sure things are good. Last year she had a break after the Breeders' Cup and she's getting the same kind of break, only a little bit longer. lf we can keep her the same way that she's been she should be a very good horse for next year.”

As for Songbird facing males next year, that remains something that Hollendorfer is not bullish on.

“That would be a situation that would be dictated by Songbird,” he said. “We're not going to rule that possibility out but as long as there are filly races to run in with real decent purses I think we'll probably stick with that. I would never say never, but we haven't picked a race out to run against the boys.”