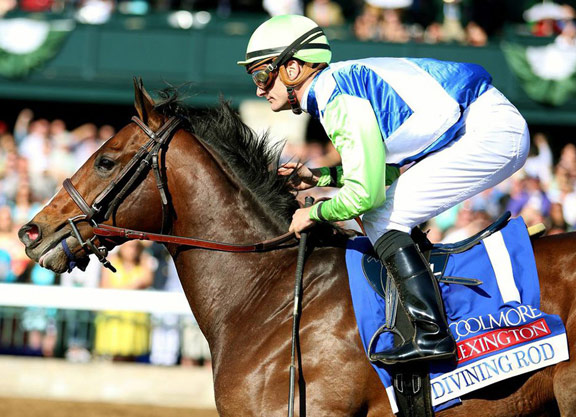 A neck second in the GIII Sam F. Davis S. Jan. 31 and third in the GII Tampa Bay Derby Mar. 7, the morning-line favorite really came into his own with an impressive score in the Lexington Apr. 11. Third in the GI Preakness S. May 16, the Arnaud Delacour pupil completed the trifecta in both the Ohio Derby June 20 and GII Indiana Derby July 18.

Live Oak Plantation's Souper Colossal (War Front), trained by Eddie Plesa, will look to give the chalk a run for his money. A two-time stakes winner on the main track during his juvenile campaign, the bay kicked off this season with a victory in Gulfstream's turfy Texas Glitter S. Feb. 7 and was subsequently shelved. Returning June 14 at Monmouth Park, Souper Colossal was second in the grassy 5 1/2-furlong Select S. and filled that spot again behind Stanford (Malibu Moon) when returned to the dirt and extended to 1 1/16 miles in that venue's Long Branch S. July 11. Bypassing the

GI Haskell Invitational S. Aug. 2 in favor of the GII West Virginia Derby Aug. 1, he finished a respectable second to Madefromlucky (Lookin at Lucky) in that 1 1/8-mile event.

Winner of this venue's Parx Derby May 2, Crossed Sabres Farm's Bluegrass Singer (Bluegrass Cat) is still trying to figure out exactly where he belongs. Fifth in the James W. Murphy S. over the Pimlico turf May 16, the Marcus Vitali trainee was third in the Select and faded to ninth in Gulfstream's GIII Carry Back S. July 5. The gray was fifth behind 'TDN Rising Star' and

Ian Wilkes saddles an interesting contender in Island Town (Hard Spun). An non-factor sixth in his seasonal bow at Keeneland Apr. 4, the chestnut put it all together next out with an optional claimer win at Churchill May 2 followed by a victory in that venue's GIII Matt Winn S. June 13. The gelding was most recently fifth in the Indiana Derby.