Dirt Try May Be Next for Sole Volante 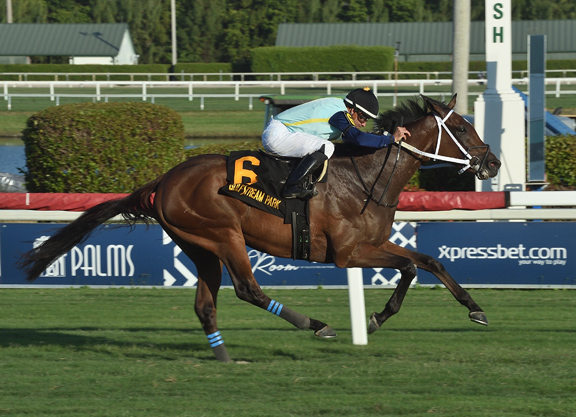 Andie Biancone and Limelight Stables Corp.’s Sole Volante (Karakontie {Jpn}), who is now two-for-two on the turf after an impressive last-to-first victory in the Pulpit S. at Gulfstream Park Saturday, may move to the dirt for his next start, according to trainer Patrick Biancone.

“We may go dirt one time,” Biancone said Tuesday. “If we stay on the turf, we have nothing to run in for seven or eight weeks. But if he comes out [of the Pulpit] good, he may run–I say may, I don’t say he will–he may run the in the [Jan. 4] Mucho Macho Man S. He is a come-from-behind horse, so he’ll need to learn to take the kickback in the face and everything. We’ll see if he likes it.”

Sole Volante opened his career with a late-running three-length victory at Gulfstream Park West Oct. 12. He stepped right up to stakes company to win the one-mile Pulpit S. as a 13-1 longshot.

Asked if it was a tough decision to send the gelding out in stakes company in his second start, Biancone said, “No. He was really good at home even before he ever ran. And I think he was quite impressive when he won first time out. We gave him time, we weren’t rushing to bring him there, and he improved. We were very happy with his work in the mornings. You need to put them in the water if you want them to swim.”

In the Pulpit, Sole Volante raced well back in the field before commencing an eye-catching rally along the rail turning for home. He pounced to the lead in upper stretch and skipped home a two-length winner (video).

“He was very impressive, even for me who trains him,” Biancone said of the 2-year-old’s effort. “He got squeezed at the start and lost some ground, but he’s a come-from-behind horse anyway, so it was not a big deal. The two jockeys who have ridden him both said the same thing–he’s very intelligent. When he you want to move a little bit, he’ll move, when you want him to slow down, he slows down. Some are born with that in their minds and in their hearts and look like they’ve done it all their lives.”

Biancone purchased Sole Volante for $20,000 at the OBS April sale and he is co-owned by his daughter and assistant Andie Biancone.

“I bought him for two reasons; first he was moving really well on the track (:10 2/5) and second, he looked like a horse I trained a long time ago named [1984 G1 Prix de l’Arc de Triomphe winner] Sagace (Fr) (Luthier {Fr}). That’s why I bought him. Sagace was built the same way, not typical American, but typical horses that we saw in the old time. More greyhound than a bulky bull. I liked that.”

“He seems to be a nice stallion and he has produced some good winners with some mares who have not achieved as much,” Biancone said of Karakontie. “A young stallion won’t get the best mares in the first year, but I think he could be a very good stallion.”

In addition to Sole Volante, Karakontie has been represented this year by G3 Horris Hill S. winner Kenzai Warrior and Tyro S. winner Karak, as well as stakes placed Torres del Paine and In the Present.

While Karakontie, who won the G1 Grand Criterium at two and the G1 French 2000 Guineas at three, has gotten off to a promising start at stud, Gainesway’s Michael Hernon said he expects the stallion’s progeny to only get better.

“They develop consistently well as they mature,” Hernon said. “The weanlings become better yearlings and the yearlings progress well into 2-year-olds with training. They appear very sound and they are showing speed–which, of course, he had as well.”

Hernon continued, “Karakontie has all the credentials to make a top stallion. He has got pedigree, top and bottom. He’s got Storm Cat speed through Bernstein and you’ve got Miesque, who is hugely influential, on the bottom side of the pedigree. And you’ve got the performance. He was a triple Grade I winner, he’s a horse who improved from two to three. And then he’s a very good physical. He represents very good value when you take everything into consideration for $10,000 LFG. He’s a horse who is going to combine European and American appeal in the marketplace, especially with the increased popularity of turf racing and the new lucrative turf programs in America.”