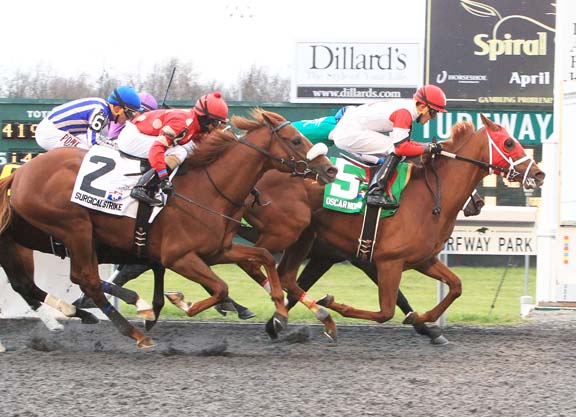 For all their undoubted virtues, all-weather tracks don’t make it easy when it comes to forecasting how accurately the form will translate to a different surface. Keeneland’s relationship with Polytrack developed an eight-year itch which ended in divorce. I suspect that one of the issues which led to the parting of the ways was the failure of the GI Blue Grass S. to prove a reliable stepping stone to the GI Kentucky Derby, just down the road and only a few weeks later. Although Street Sense contested the first Polytrack Blue Grass, he was beaten a nose by Dominican, who could finish only 11th on the big day. Over the next seven years, the only Blue Grass winner to reach the first three at Churchill Downs was Dullahan, third in 2012.

As it’s now more than 10 years since the Polytrack surface was first raced on at Turfway Park, there is a reasonable amount of data available concerning the track’s Derby trial, the Spiral S. (formerly the Lane’s End S). Seven of the 10 winners have gone on to contest the Kentucky Derby, of which Hard Spun finished second in 2007, Animal Kingdom was triumphant in 2011 and Went The Day Well was a creditable fourth in 2012.

The clear message is that this year’s GIII Spiral S. winner, Oscar Nominated, merits respect if connections stump up the $200,000 needed to nominate this colt, who was claimed for $75,000 last October. Remember, the 1999 Kentucky Derby fell to Charismatic, who contested a claimer with a tag of $62,500 less than three months before he took the Derby on his 15th appearance.

Oscar Nominated will be venturing into the unknown if he does appear in the Derby, as his six starts prior to his success in the Spiral S. had all been on turf. There have to be some doubts about whether he will be able to reproduce his best form on the Churchill dirt (but the Ramseys have nothing to lose–apart from that $200,000–by letting him take his chance).

There’s no escaping the fact that Oscar Nominated is a son of Kitten’s Joy. This stallion made only two appearances on dirt during a 14-race career which earned him the title of champion turf horse. Those dirt starts yielded earnings of only $10,550, compared to the $2,065,241 which came his way on turf. What’s more, five of the six horses in the first two generations of Kitten’s Joy’s pedigree were winners on turf–four of them at Group 1 level in Europe.

In the circumstances, it is hardly surprising that the bulk of Kitten’s Joy’s considerable success as a stallion has been with his dirt runners–to the extent that he has been champion sire of turf runners in each of the last three years. In 2013 75% of Kitten’s Joy’s progeny earnings came on turf, with a further 10% on all-weather; in 2014 it was 77%, with 8% on all-weather; and last year it was a whacking 86% on turf, with 3% on all-weather. A bit of quick arithmetic reveals that only 15% of his earnings came on dirt in 2013 and ’14 and only 11% last year.

Of course this type of situation often becomes a self-fulfilling prophecy. With so many Kitten’s Joys excelling on turf, why would owners and trainers bother to see if their Kitten’s Joy youngster is proficient on dirt? Perhaps they should, as there has been the occasional graded winner on dirt, such as Pick of the Litter (GII Fayette S.) and Csaba (a multiple Grade III winner). Mention of Csaba reminds me that, just over three years ago, I wrote an article [click here] in which I concluded that “we can surely expect to see future crops by Kitten’s Joy coming up with high-class winners on all surfaces.” I’m not so sure about that now, but a successful transition to dirt by Oscar Nominated would be a powerful catalyst for a change of attitude.

Of course Oscar Nominated isn’t just a son of Kitten’s Joy, but his dirt aspirations won’t get too much help from his dam Devine Actress or broodmare sire Theatrical. There are some distinct parallels between the racing careers of Kitten’s Joy and Theatrical, mainly that they both landed the Eclipse Award for turf male. However, Theatrical did so as a 5-year-old, rather than at three. Theatrical also shone primarily as a sire of turf horses, some of which–like Theatrical–improved with age. It has been a similar story with the Grade I winners out of Theatrical’s daughters, one exception being Coil (Haskell Invitational, etc).

Devine Actress was true to type in that she raced only on turf and all-weather during a brief career, winning on both surfaces. On the last of her six starts, as a 5-year-old, she won the Santa Lucia H. over 1 1/16 miles over Santa Anita’s Pro-Ride surface.

Devine Beauty was one of seven black-type winners sired by Theatrical from Mr. Prospector mares, best of the others being Geri, who achieved the difficult feat of becoming a Grade I winner on both dirt and turf, and Startac, a winner of the GI Secretariat S. on turf who also enjoyed stakes success on dirt. Perhaps there’s some hope here that Oscar Nominated will handle dirt.

Oscar Nominated’s second dam, Devine Beauty, had a distinguished three-parts-brother by Mr. Prospector’s champion son Gulch. Named Sorcerer’s Stone, this Grade III winner earned an Experimental Free Handicap figure of 115, having won three of his four starts at two, all on dirt. Their dam Magical Holiday also did well with her Thunder Gulch colt Holiday Thunder, another dirt performer who also earned 115 on the Experimental.

Magical Holiday in turn had a distinguished brother in Dramatic Gold, a durable dirt performer who collected more than $2.5 million, thanks largely to wins in the GII Molson Export Million and the GI Meadowlands Cup, both over a mile and an eighth.

While there may be some doubt about Oscar Nominated’s dirt credentials, there is none about his stamina. His narrow win in the Spiral shows that he appreciates a mile and an eighth, and his sire and broodmare sire both landed the Turf Classic over a mile and a half.