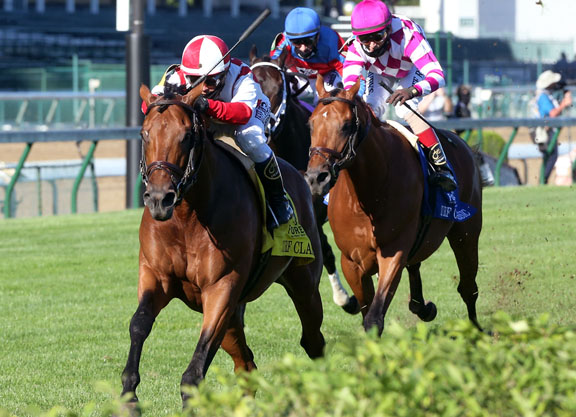 When Klaravich Stables' Digital Age (Ire) (Invincible Spirit {Ire}) made his one and only previous appearance beneath the Twin Spires on [real] Derby Day 2019, the 320,000gns purchase out of the 2017 Tattersalls October sale returned $19.20 to his happy backers in the GIII American Turf S. Let go at the exact same quote as the least-fancied of three Chad Brown entries for Saturday's GI Old Forester Bourbon Turf Classic S., the 4-year-old settled last but one, was produced wide into the lane by Javier Castellano and rocketed home to best pacesetting Factor This (The Factor) by a little more than a length. Favored Sacred Life (Fr) (Siyouni {Fr}) rounded out a Brown-trained 1-3, while Rockemperor (Ire) (Holy Roman Emperor {Ire}) finished fourth.

Dropped out to near the tail as Factor This set solid fractions of :23.24 and :47.17 in advance of longshot True Valour (Ire) (Kodiac {GB}), Digital Age was patiently handled by Castellano until he got after him in earnest about three furlongs out. Clipping the hedge for the run around the second turn, Digital Age was steered out about six paths wide off the home corner, was sent through a relatively narrow opening between the usually prominent Somelikeithotbrown (Big Brown) to his inner and Sacred Life to his outer, had Factor This in his sights entering the final furlong and kicked home to score nicely. It was the second win in a row in the race for Klaravich and Brown, who took the 2019 renewal with future Horse of the Year Bricks and Mortar (Giant's Causeway).

“This horse loves this course,” said Whit Beckman, assistant to Brown. “I think Chad discussed race tactics with the jockeys and they all know what they're doing going into this spot. It's always good to win races like this at home here on Derby Day.

He continued, “Turning for home, he had a good position, got a nice trip and this horse likes this turf course. He shipped down from New York, but just watching him train here the last few days, he looked super relaxed. He looked like he was doing better than I had ever seen him do.”

Though he did not visit the winner's enclosure again in 2019, Digital Age was a good second to loose-on-the-lead A Thread of Blue (Hard Spun) in the Saratoga Derby and closed the season with a troubled fourth in the GI Hollywood Derby in late November. Runner-up to the talented Breaking the Rules (War Front) in a Belmont S. undercard allowance June 20, the bay most recently went one better in a third-level Saratoga allowance July 18.

Digital Age becomes the 20th top-level winner for Invincible Spirit and second in this country, joining 2009 Breeders' Cup Juvenile upsetter Vale of York (Ire). He is the 12th top-level winner out of a daughter of Lemon Drop Kid.

The Jan. 28 foal was one of six horses purchased by Klaravich at the 2017 Tattersalls October Book 1 sale and he is the second Grade I winner to emerge from that draft, the first being two-time top-level winner Newspaperofrecord (Ire) (Lope de Vega {Ire}). Others purchased at Tattersalls three years ago include MGSP Good Governance (GB) (Kingman {GB}) and GSP Value Proposition (GB) (Dansili {GB}).

Digital Age has a 2-year-old full-sister named Cheshire Plain (Fr) who is unraced in France to date and a yearling half-sister by Siyouni (Fr).