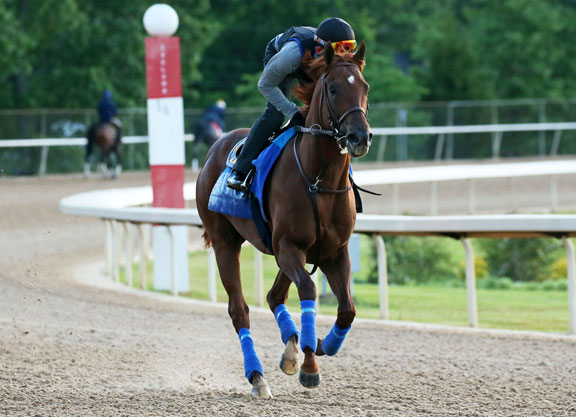 Before the coronavirus pandemic struck America and shook up horse racing along with it, things seemed to be falling, as they often do, in Bob Baffert's favor. The Hall of Fame trainer, no stranger to coming into Louisville with the horse or horses to beat, had a trio of colts who looked like they could be the first three choices in the GI Kentucky Derby. Even with the Run for the Roses now postponed four months, Baffert still appears to have a stronghold over a marquee 3-year-old race on the first Saturday in May, as he starts two-thirds of his imposing triumvirate, Charlatan (Speightstown) and Nadal (Blame), as respective favorites in split divisions of Saturday's GI Arkansas Derby at Oaklawn Park.

The likelier winner of the two, drawn into the weaker division with less early speed signed on, is the brilliant but untested Charlatan. Unveiled going six furlongs Feb. 16 at Santa Anita, the $700,000 Keeneland September buy quickly established command and drew off to a 5 3/4-length score. That effort earned 'TDN Rising Star' honors, and was underscored when the Beyer for the race came back a dazzling 105. Stretched out to a two-turn mile Mar. 14 in Arcadia, the chestnut removed blinkers, but again went to the lead and again dominated, this time by 10 1/4 lengths with a 106 Beyer. Switching riders from Drayden Van Dyke to Martin Garcia for this step up in class, Charlatan has consistently blown away his competition in the mornings, most recently going three-quarters in 1:12 2/5 (1/6) Apr. 26 (XBTV video), and will likely be put on the engine again from his rail draw.

Charlatan's main rival is a fellow 'Rising Star' in WinStar Farm and Team Valor International's Gouverneur Morris (Constitution). Romping by nine lengths in the slop at Saratoga first out last summer, the $600,000 Fasig-Tipton Gulfstream buy was a wide runner-up in the GI Claiborne Breeders' Futurity before being put on the shelf for the remainder of his juvenile season. Returning with a sharp allowance tally Feb. 14 at Tampa, the gray was most recently fourth behind leading Derby contender Tiz the Law (Constitution) in the GI Curlin Florida Derby Mar. 28 at Gulfstream.

Peter Redekop's Anneau d'Or (Medgalia d'Oro) looks to bounce back from a disappointing sophomore debut that followed a bang-up 2-year-old campaign. Cruising to an eight-length success when unveiled over the Golden Gate grass Sept. 29, the $480,000 OBS April buy raised his game when thrown into the deep end in the GI TVG Breeders' Cup Juvenile, just missing by a head at 28-1. Again narrowly short when beaten a neck in the GII Los Alamitos Futurity Dec. 7, the bay was respected enough to be even-money in a division of the GII Risen Star S. Feb. 15 at Fair Grounds, but never picked up his feet, fading to finish ninth. Removing the blinkers that went on for that engagement, Anneau d'Or shows a string of sharp works at his Northern California base, capped by a six-furlong bullet in 1:14 2/5 (1/5) Apr. 24.

Jackpot Farm's Basin (Liam's Map), the lone graded stakes winner in this division, will also try to rebound. Dominating the GI Runhappy Hopeful S. at Saratoga, the $150,000 KEESEP purchase went unseen for over six months and was third upon return in the local GII Rebel S. Mar. 14 before running fourth in the track-and-trip Oaklawn S. Apr. 11.

Hero of that aforementioned Rebel, Nadal figures to face a much stiffer challenge than his barnmate in the second, stronger half of the Arkansas Derby. Picking up his 'Rising Star' badge with a front-running tally Jan. 19 at Santa Anita, the $700,000 Fasig-Tipton Gulfstream buy dueled on a fast pace and held late to score in the GII San Vicente S. Shipped into Hot Springs for his first two-turn test in the Rebel, he once again was pushed through sizzling fractions, and put away all his early challengers before holding sway late to remain unbeaten. Like Charlatan, Nadal has also been scorching the Santa Anita track in the mornings, most recently going five furlongs in :59 1/5 (1/46) Apr. 26 (XBTV video).

Victorias Ranch's King Guillermo (Uncle Mo) will try to prove his last effort was no fluke at a fraction of the mutuel price. Off the board when favored at 6-5 debuting in a Gulfstream dirt sprint Sept. 29, the $150,000 OBS April purchase perked up in a big way when moved to turf across town at Gulfstream West Nov. 2, going wire to wire for a 6 1/4-length graduation. Third after chasing a quick tempo in the Pulpit S. Nov. 30 back in Hallandale, the Juan Avila pupil was ambitiously spotted in the Mar. 7 GII Tampa Bay Derby and rewarded his connections' confidence, skipping away to a 4 3/4-length upset at 49-1. Drawn one slot inside of Nadal, he will be part of an interesting early chess match between his jockey Samy Camacho and Nadal's rider, Joel Rosario, aboard the two speedballs.

Also expected to add gas to the pace fire is morning-line third choice Wells Bayou (Lookin At Lucky). A winner of two of his first three, including a muddy local optional claimer Jan. 26, the $105,000 OBS March buy stepped up with a promising second after setting a sharp clip in the GIII Southwest S. Allowed a much easier time of it up front in the GII Twinspires.com Louisiana Derby Mar. 21 at Fair Grounds, he dug in down the lane to prevail by 1 1/2 lengths.

Wells Bayou's conqueror in the Southwest, Silver Prospector (Declaration of War), re-opposes and figures to be the principal benefactor if the pace falls apart. Upsetting otherwise-undefeated Tiz the Law in the GII Kentucky Jockey Club S. at two, he was fourth when attempting to close into a slow pace in the Smarty Jones S. here Jan. 24 before parlaying a ground-saving ride to victory in the Southwest. Encountering some traffic in the Rebel, the gray retreated from there to be a distant sixth.

Fringe contenders include champion Storm the Court (Court Vision), who looks for his first victory as a 3-year-old after running fourth in the San Vicente and third in the GII San Felipe S., and Farmington Road (Quality Road), who closed from the clouds to be second by a half-length in the Oaklawn S.