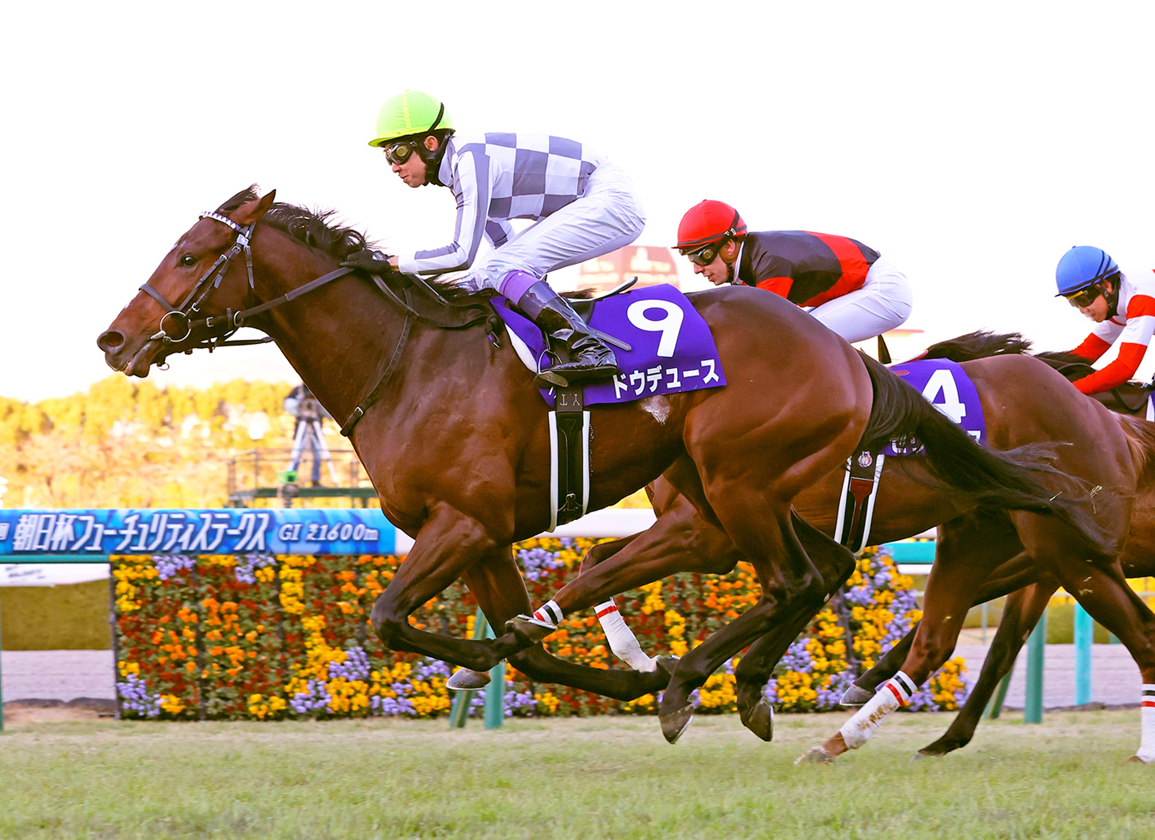 The reigning champion 2-year-old male in Japan, Do Deuce (Jpn) (Heart's Cry {Jpn}) will be out to avenge a pair of defeats this season in Sunday's middle jewel of the Japanese Triple Crown, the G1 Tokyo Yushun (Japanese Derby) over 2400 metres.

Perfect in three starts last season, including a half-length success in the G1 Asahi Hai Futurity S. going the metric mile last December, Do Deuce just failed to reel in pace-pressing Ask Victor More (Jpn) (Deep Impact {Jpn}) in the 10-furlong Group 2 event named in honour of the 2005 Triple Crown hero Mar. 6. Nevertheless favoured at just shy of 3-1 in the G1 Satsuki Sho (Japanese 2000 Guineas) Apr. 17, the bay colt found himself much farther back in the run than he'd ever been previously and was forced to cover ground, but kicked home his final 600 metres in a race-fastest :33.8 to finish an excellent third, beaten just over two lengths, before galloping out strongly. He has another double-digit gate to overcome in 13, but is in the capable hands of five-time Derby winner Yutaka Take.

“He has good racing sense, and I don't think it matters what the ground condition is like,” said Take. “I have always had the ride on him, so I've been able to see him develop, including when he was good enough to become the 2-year-old champion. He has a lot of ability.”

Do Deuce has an interesting mix of stamina and speed in his pedigree. His sire accounted for 2014 Derby winner One and Only (Jpn), while his dam, Dust and Diamonds (Vindication), was a two-time graded-winning sprinter and runner-up in the GI Breeders' Cup Filly & Mare Sprint before selling to Katsumi Yoshida for $1 million in foal to Pioneerof the Nile at Keeneland November in 2016.

Worked the Ritto Poly track to top him up. Didn't need much else judging by the pics yesterday!

Geoglyph (Jpn) (Drefong), who suffered his first loss when fifth in the Asahi Hai, resumed with a second to Danon Beluga (Jpn) (Heart's Cry {Jpn}) at Group 3 level in February, but sat a trip better than midfield in the Satsuki Sho and did his best work through the line to defeat the baldy faced and outposted Equinox (Jpn) (Kitasan Black {Jpn}) by a length.

“It was a hard race last time, so he deserved his break,” said trainer Tetsuya Kimura. “He returned to the stable looking really well and is full of energy. He is in similar condition to how he was for the Satsuki Sho.”

Danon Beluga enjoyed a cosy inside trip from the one hole in the Guineas, but is drawn further out this time, while Equinox, who did it tough in the Guineas and ran on admirably, once again has the widest alley to navigate. Christophe Lemaire was able to work out a trip from the 18 in last week's G1 Yushun Himba aboard Stars on Earth (Jpn) (Duramente {Jpn}) over the same course and distance.

Pradaria (Jpn) (Deep Impact {Jpn}) is likely to be best-backed to give his legendary sire a fifth straight Derby winner and eighth overall. Having finished second in a pair of tries over 10 furlongs to begin his career, the bay was a romping seven-length winner of a 2400-metre maiden at Hanshin Mar. 19 and proved that was no fluke with a half-length defeat of Lord des Ailes (Jpn) (Deep Impact {Jpn}) in the G2 Aoba Sho, a Derby trial over this track and trip Apr. 30. The latter has the services of the visiting Damian Lane, but is also drawn awkwardly in barrier 17.

WATCH: Many of Sunday's entrants are exiting the G1 Satsuki Sho