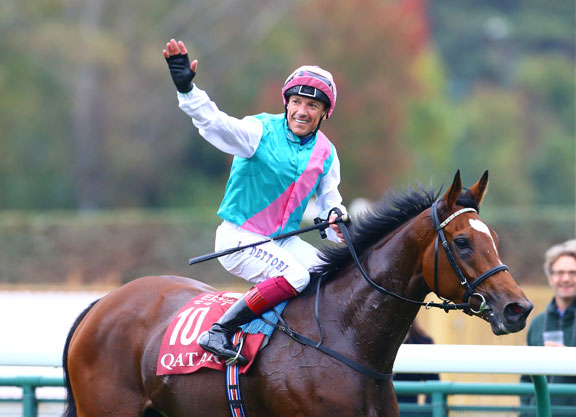 Enable (GB) (Nathaniel {Ire}) will on Sunday attempt to accomplish what has never been done before in winning a third G1 Prix de l'Arc de Triomphe. The man who has been in her saddle the past three years and steered her to all 11 of her Group 1 victories, however, said he is feeling less pressure than he did at her first attempt at the historic feat 12 months ago, when she was second to Waldgeist (Ire) (Galileo {Ire}).

“We have already achieved something historic by winning the King George for a third time,” he said, reflecting on the 6-year-old's successful 2020 campaign to date. “Frankly, the pressure involved is less than last year, and it's not because there will be fewer people in Paris. It's because we have already experienced disappointment. The three hours which followed last year's defeat were the worst in my entire professional career, and I think that Enable was similarly downcast.”

“I'm praying that we will get drawn somewhere between one and eight,” Dettori added. “Rain is forecast, and the ground will most likely be heavy, [but] I hope that we won't experience extremes of going, as happened last year. There are two horses that like to go to the front, Serpentine and Sovereign. So taking up a good position will be 'de rigueur.' The ground is a very important factor, and Enable has already shown that she can handle it.”

The rainfall in Paris this week has meant that Enable has moved back ahead of the 3-year-old filly Love (Ire) (Galileo {Ire}) in the betting markets.

“I have spoken with my colleagues and racing analysts–they say that a heavy track could count against Love, because her low-to-the-ground, fast action is better suited to good ground,” Dettori said. “Genuine heavy ground will turn the Arc into a stamina test–that will play to Stradivarius's strengths–and, on the contrary, the distance may prove a bit long for Persian King, although anything trained by Andre Fabre warrants respect.

“There are other horses which shouldn't be underestimated, such as Sottsass. He hasn't had a hard campaign and boasts prior experience in the Arc de Triomphe [third last year].”