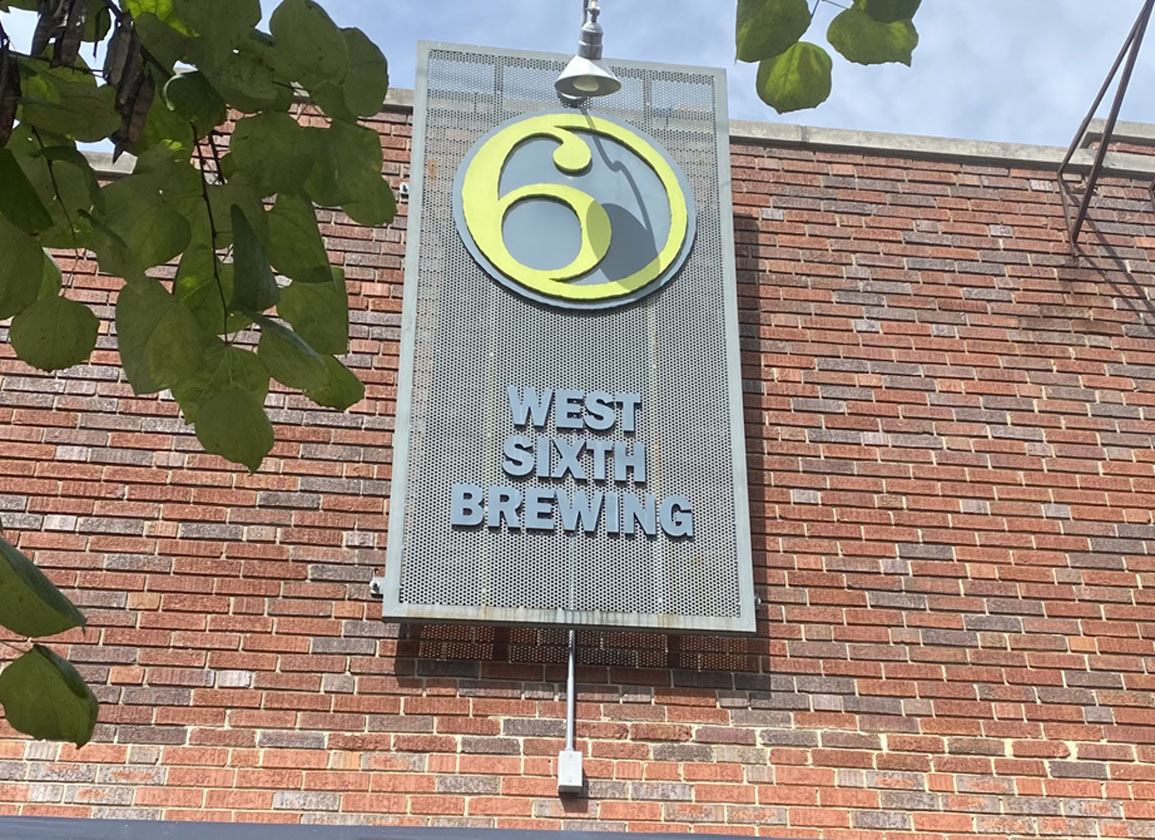 Read on for our tour through Lexington's brewery scene | Katie Petrunyak

Since the conclusion of a dazzling Keeneland September Yearling Sale, buyers and sellers alike have been eager to return to Lexington for the 2021 Keeneland November Breeding Stock Sale. There may be no better time of year to visit the Bluegrass as the vibrant trees in a kaleidoscope of fall hues serve as the backdrop for the some of racing's most talented broodmare prospects, stallion prospects and horses of racing age, as well as proven broodmares and promising weanlings.

After a long day spent combing through the expansive catalogue of breeding stock on offer, salesgoers are drawn to step out of the crisp November air and warm up with a good drink. While bourbon is unabashedly the beverage associated with Lexington, the growing city also has much to offer for the craft beer connoisseur. 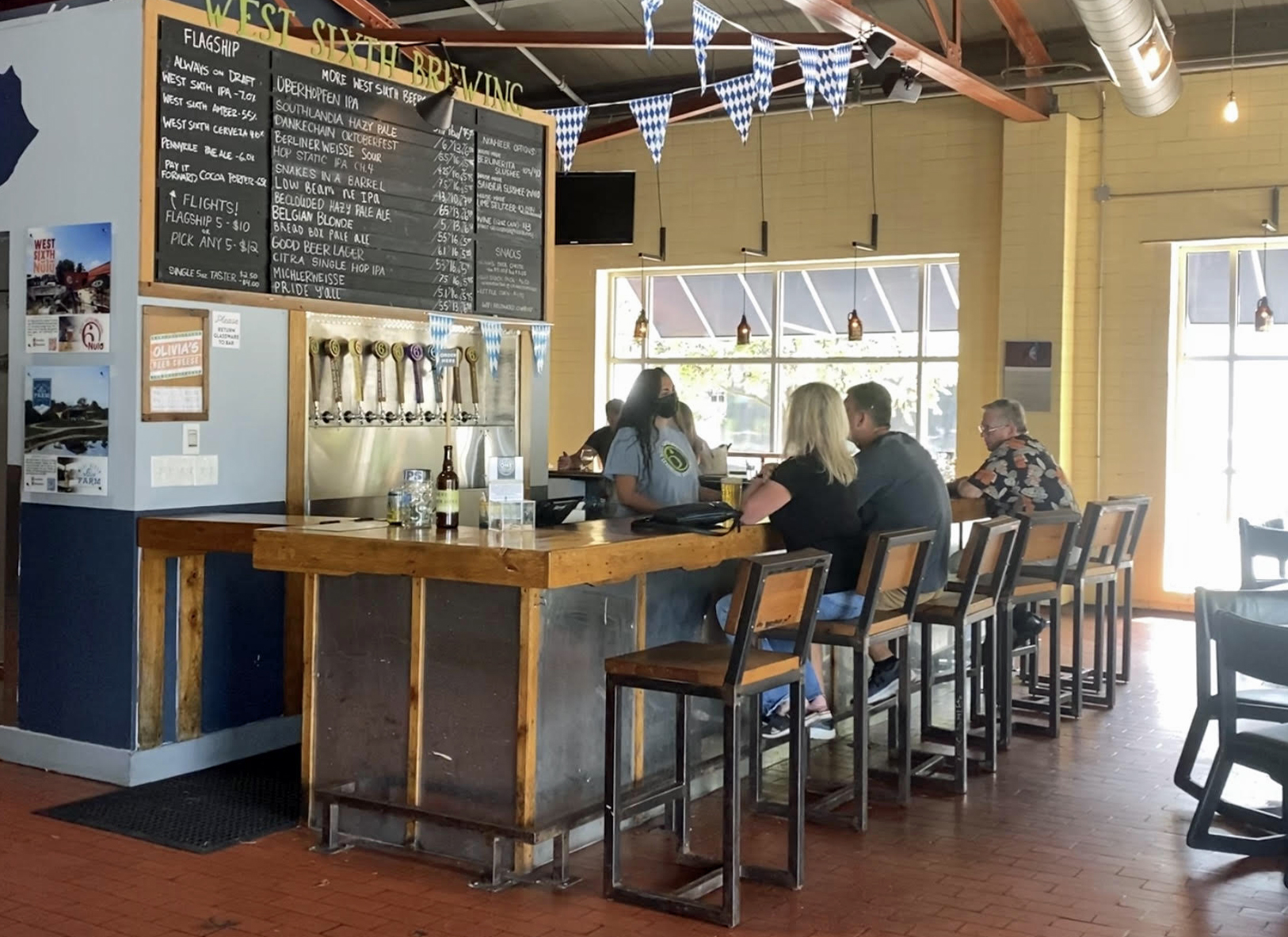 Almost any craft beer fanatic from Lexington will point a newcomer toward visiting West Sixth. The bustling brewery features a wide variety of brews while the laid-back but upbeat atmosphere of both the indoor taproom and the outdoor beer garden provides an ideal setting to unwind among friends. Tours are offered on weekends for visitors hoping to get an in-depth look at the production facility before they sit down with a flight.

West Sixth is located in a 100-year-old building known as the Bread Box, originally home to the Rainbo Bread Factory. Today, beer is brewed, canned and distributed out of this location and in just a short time, the brewery's brand has exploded in popularity to become a household name in Lexington.

Kelly Hieronymus is the Creative and Marketing Director for West Sixth and has been with the brewery since its inception.

“West Sixth was founded in 2012 by four different owners-Ben, Brady, Joe and Robin,” she shared. “Their main goal was to bring craft beer to Lexington. Prior to that, there wasn't really a lot on the craft beer scene in Kentucky, much less the city itself. They opened the brewery with the hope of creating a community hub where people can gather and have craft beer that is sustainable and well-made so that they could be really proud of the product.”

As West Sixth approaches its tenth anniversary in a few months, their product is now distributed throughout the state of Kentucky and in Cincinnati, Ohio.

“Our ultimate goal is to become the craft beer of Kentucky,” Hieronymus said. “We want you to come into state lines, come into Lexington and immediately crave a West Sixth.”

The brewery's flagship beer that is available year-round, and one that is a must-try for newcomers, is an India Pale Ale.

“It's bright, forward and has a lot of grapefruit notes to it,” Hieronymus explained. “It's a little bit addictive.”

Two other popular flagship beers at West Sixth are the Amber Ale and the Cocoa Porter. Rotating varieties include the Cerveza, a light Mexican-style lager, the Berliner Weisse Sour, a sour German ale, as well as the Pennyrile Pale Ale. Throughout the year, seasonal beers are also offered. This fall, the Dankechain Oktoberfest has been a sought-after addition.

“It's a lager style so it has a nice, clean taste throughout the entire beer,” Hieronymus said. “It's a really beautiful beer; it's amber in color. It has a lot of crisp, biscuit-like notes to it.”

In addition to their home base in Lexington at the Bread Box, West Sixth also has locations in Louisville and at West Sixth Farm, a 125-acre property with a seasonal taproom in Frankfort, Kentucky.

West Sixth puts a heavy emphasis on its efforts in presenting a Kentucky Proud product–one that is produced and processed in Kentucky by Kentuckians.

“We employ over 80 employees throughout Kentucky, both in our taprooms and in back-of-house production,” Hieronymus noted. “To us, employing people and being a good steward of our state is the number one reason why we promote being Kentucky Proud. It's about being a place that evokes good memories for people and it's a product that people can be proud of.”

West Sixth also works to create a positive social impact on their community with the profits made through their Sixth for a Cause Foundation. Through various programs, money is raised for various nonprofits in the Lexington area. The brewery hosts monthly events where a percentage of the daily sales go to a nonprofit. In addition, for every six-pack of West Sixth's Pay It Forward Cocoa Porter purchased, 50 cents goes to a nonprofit that the company's staff votes upon.

“We're always trying to find new and exciting ways to be a megaphone for nonprofits in our community,” Hieronymus said.

Beyond raising money to better the community, West Sixth also hosts a weekly run/walk club and a community yoga night, among other entertaining events, in an effort to welcome guests both native to Lexington and those in town looking to get a taste of what the Bluegrass has to offer.

“We want to be a place for folks to gather,” said Hieronymus. “It's family friendly, both day and night. There's always a rotating cast of characters behind the bar or enjoying a beer. It's a great place to come by yourself and bring a laptop to work, sit at the bar and chat with one of our bartenders. It's also a great place to gather with your friends. We want folks to come in and immediately feel invited by the smell of beer and find something on the board, even if they're not a typical craft beer drinker, that they'll love. We want to make a really good craft beer for the state of Kentucky.” 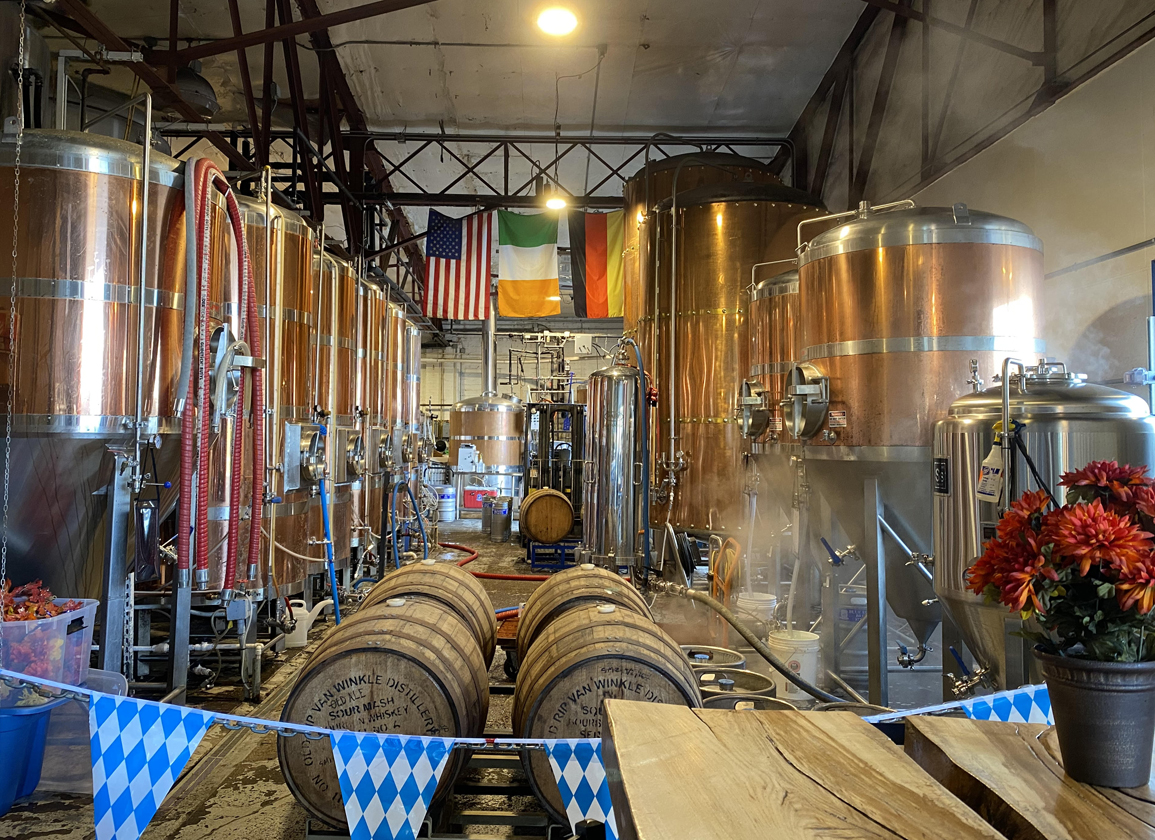 At Blue Stallion Brewing, guests can sit down and enjoy a drink while watching all the beer-making action| Katie Petrunyak

The Dunkel is one of the most popular choices at Blue Stallion. The classic dark lager is heavy on Munich malts to give the brew a bread-like taste with some caramel notes as well.

The fun, easygoing atmosphere at Blue Stallion's taproom is brought on by an array of lounge-type seating and a high-top bar, plus an outdoor patio, and it's a popular spot to bring a group of friends to strike up a game of pool, shuffleboard or darts or to watch racing and sporting events. Food trucks are a common appearance at the brew pub, which also holds various events each month including their well-attended Sunday Trivia nights. Visitors can enjoy their drink of choice while checking out the brewing equipment, which is adjacent to the tasting room, and four-legged friends are welcome at this laid-back taproom. 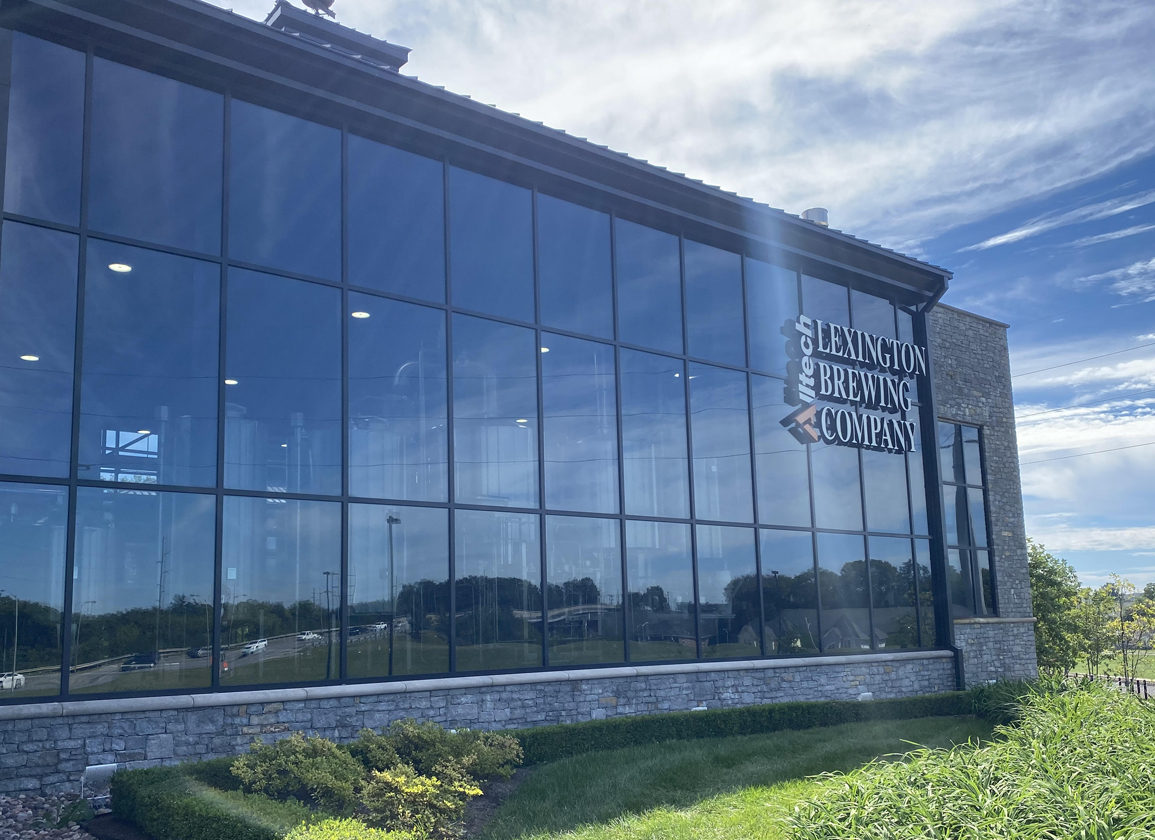 Alltech Brewing is the oldest craft brewery in Lexington, founded in 1999 by Irish entrepreneur Pearse Lyons, and is one of the few operations that doubles as a brewery and a distillery. Naturally, the brewery is known for its bourbon-barrel ales.

Their signature Kentucky Bourbon Barrel Ale is the flagship beer here and is a go-to for barrel-aged beer fans. With notes of oak, vanilla, caramel and toffee, this ale has received nearly a dozen awards, most recently including the 2019 USA Beer Ratings Silver Medal and the 2017 Kentucky Living's Best in Kentucky.

The company offers year-round tours through the Kentucky Bourbon Trail experience and is the only location along the trail where visitors can sample both bourbon and beer. During the hour-long tour, guests have the opportunity to walk through the state-of-the-art beer and bourbon-making facilities before receiving four tokens to select their bourbon and beer samples of choice. At the Visitor Center, guests can relax in front of the expansive bar or outside in the beer garden.

Alltech also has award-winning craft distilleries in Pikeville, Kentucky at the Dueling Barrels Brewery and Distillery as well as in Dublin, Ireland at the Pearse Lyons Distillery at St. James. 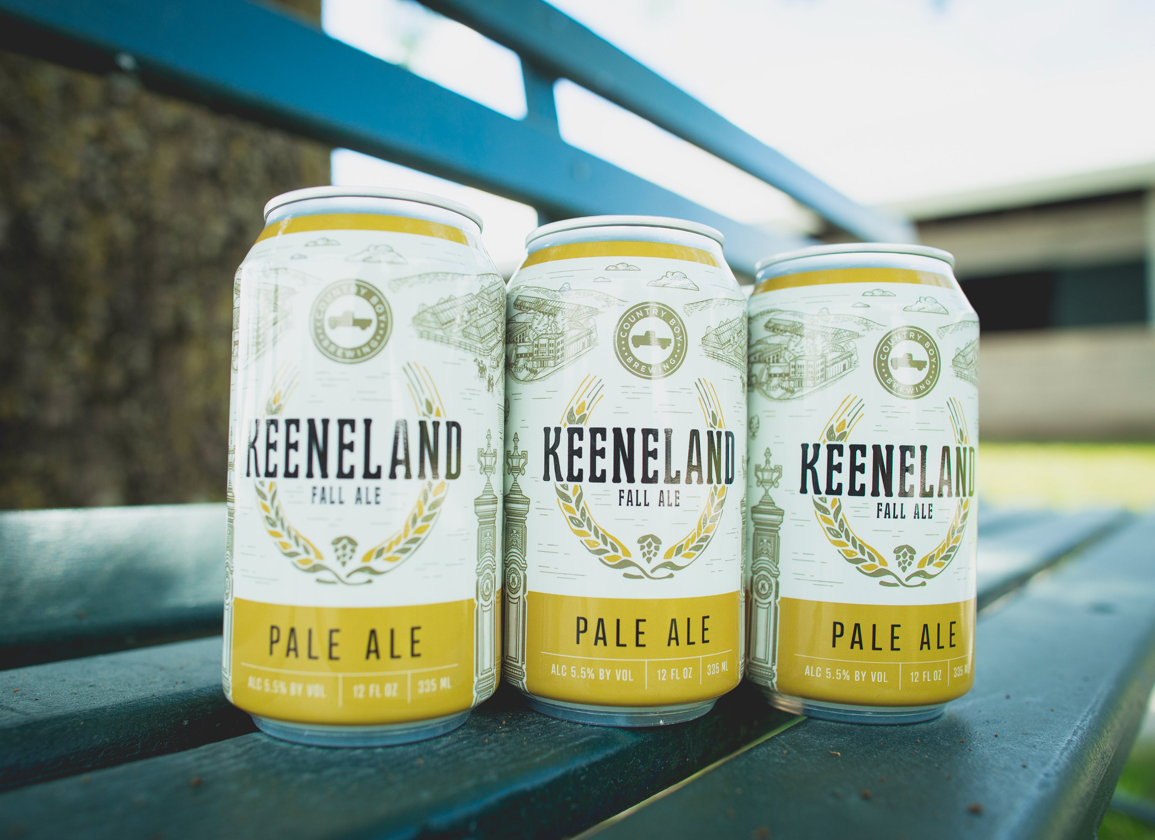 Cougar Bait American Blonde Ale, Shotgun Wedding Vanilla Blonde Ale, Cliff Jumper IPA and Halfway Home Pale Ale. The names of Country Boy's four flagship beers are enough to inspire most anyone to visit. But the brewery itself, which started in Lexington in 2012 by four Kentuckians, is all about bringing family and friends together to enjoy minimally-processed beers made with high-quality ingredients.

In 2017, Country Boy broke ground on a second location in nearby Georgetown, Kentucky to offer additional capacity of 1,000 barrels of fermentation space. Today, both the Lexington and Georgetown locations are open for visitors and offer food from 'The Kitchen,' a Kentucky delicatessen that presents everything from nachos and pretzel bites to flatbreads and veggie wraps.

Country Boy Brewing has an ongoing partnership with Keeneland in which they annually release a Keeneland Fall Ale in celebration of Keeneland's fall racing and sales season. This year's edition is a traditional American Pale Ale that  features a fruity nose with notes of candied orange and papaya. It is available on draft at bars and restaurants in Lexington and is also served at Keeneland throughout the Fall Meet and the November Sale.

The Keeneland Fall Ale is also available at the Keeneland Mercantile in downtown Lexington as well as local grocery and package stores. For each case sold, one dollar is donated to the Blue Grass Farm Charities Back to School Backpack Program.

For a complete list of breweries in Lexington and to learn more about the craft beer scene in Central Kentucky, go to Visit Lex's Brewgrass Trail page here.