Derby Points On the Line In Hyacinth 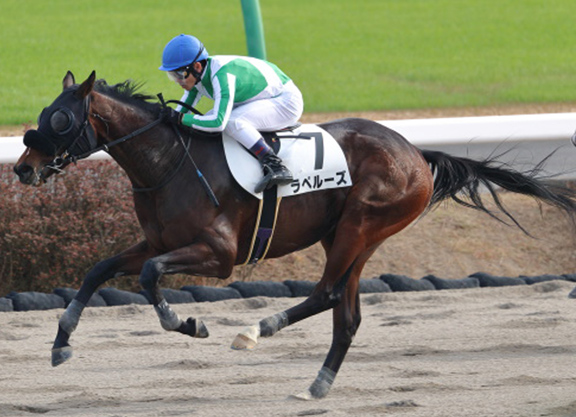 Sunday's live program at Tokyo Racecourse features the return of Group 1 action in the one-mile February S., but about 90 minutes earlier, the nation's 3-year-old set will compete for a Kentucky Derby points that are up for grabs in the $347,257 Listed Hyacinth S. over the same distance.

Nobutaka Tada's La Perouse (Jpn) (Pelusa {Jpn}) is the only member of the 11-strong field that was given an entry into the Triple Crown series at its first closing stage in late January. The homebred was well beaten trying the turf on his career debut last June, but won two of his first three starts on dirt against easier competition at Mombetsu on the National Association of Racing circuit. He proved that he could handle JRA company in his last start, a 2 1/2-length victory in a nine-furlong allowance at Nakayama Dec. 13. Leading rider Christophe Lemaire sees fit to take the call.

The Frenchman partnered with Takeru Pegasus (Jpn) (Dunkirk) in his three juvenile appearances, including a nine-length graduation over Sunday's course and trip Nov. 7 ahead of a runner-up effort to Lemon Pop (Lemon Drop Kid) in the first leg of the Japan Road to the Derby, the Nov. 28 Cattleya Sho (allowance). Yuga Kawada takes over from Lemaire.

Ladybug (Jpn) (Hokko Tarumae {Jpn}), one of three fillies in the Hyacinth, belied debut odds of 50-1 to score by five at Hanshin Nov. 14 and was a latest second in the Hyogo Junior Grand Prix at NAR track Sonoda Dec. 2.