Derby Double Not Off The Table For Santiago 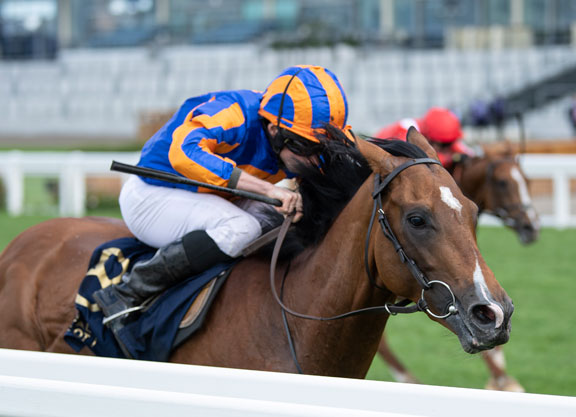 Trainer Aidan O'Brien has revealed that the door is still open for Saturday's G1 Dubai Duty Free Irish Derby winner Santiago (Ire) (Authorized {Ire}) to attempt to make it two Derbies in seven days in the Epsom version on July 4. Santiago and his five stablemates that contested the Curragh Classic could be entered for the G1 Investec Derby on Monday, O'Brien told Racing TV's Luck On Sunday programme.

“It's very possible [those that ran in Irish Derby could run at Epsom],” O'Brien said. “If any of them come out of the race exceptionally well and [the owners] want to make an entry, that's what will happen. They didn't do much [on Sunday], they'll do a canter [on Monday] and a decision will be made some time during the morning. It was unconventional to run them so soon after Ascot, but they came out of the race well and that is why they ran. Nothing is definitely ruled out.”

As for those targeting Epsom who did not run at The Curragh, O'Brien said, “The lads are thinking about Mythical (Fr) (Camelot {GB}), who was a very nice 2-year-old last season. Then there's a horse called Amhran Na Bhfiann (Ire) (Galileo {Ire}), who finished fourth in the maiden the second, third and fourth from the Irish Derby ran in.

“The lads are talking about running Vatican City (Ire) (Galileo {Ire}), who was second in the Irish Guineas so that would be an interesting one and the third from the Guineas, Armory (Ire) (Galileo {Ire}), is possible as well, but he could go to France. Those are the horses in the picture at the moment that didn't run yesterday.”

O'Brien also identified four likely candidates for the G1 Investec Oaks on the same card, headed by his English and Irish Guineas winners.

There was some Derby jockey news on Sunday as well, with Andrea Atzeni confirmed for Golden Gates H. winner Highland Chief (Ire) (Gleneagles {Ire}). Tom Marquand, who was recently taken off favourite English King (Fr) (Camelot {GB}), will have his first Derby ride as he continues his association with the Andrew Balding-trained Khalifa Sat (Ire) (Free Eagle {Ire}), according to Racing Post.