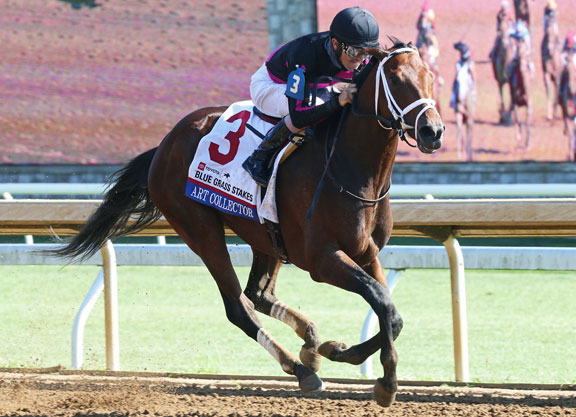 At this stage exactly four weeks ago, trainer Tom Drury, Jr. was sitting pretty with Art Collector (Bernardini), who figured the solid second choice in the GI Kentucky Derby four days hence. But, as happens all too often in this game, fate intervened, and 24 hours later, Bruce Lunsford's homebred was a high-profile defection from the Run for the Roses. A month later, the colt will again try to play the role of spoiler, this time as the morning-line 5-2 second favorite to Derby hero Authentic (Into Mischief) in Saturday's GI Preakness S. at Pimlico.

“I guess doing this as long as I have, you go through this so often,” the conditioner told a group of media assembled for an NTRA teleconference Monday afternoon. “A horse is injured or something goes wrong or you don't get into a race you want to get into. You almost become a little desensitized to it because you're used to it happening.”

He continued, “That being said, it was tough, but there are so many other things that it could have been. It was something that could be addressed pretty easily and knowing that the Preakness was right behind the Derby, we just immediately turned the page and started moving on to the next race. There wasn't really any time to sit around and cry about it. We had four weeks to get ready for this one and we needed to focus on getting him as good as we could get him for this race.”

Art Collector's injury was so minor that by Sept. 12, he was back on the worktab at the Skylight Training Center. The bay has since recorded two good-looking moves at Churchill, five furlongs in :59.40 (2/38) Sept. 19 and a half-mile in :48 flat this past Saturday. From Drury's perspective, Art Collector is sitting on go for the raid on Old Hilltop.

“I think his last two works have shown his hand a little bit,” he commented. “I don't think you could ask for a horse to work any better. He seems like he's happy enough, he's kind of throwing his ears up galloping out. At this stage, he seems like a horse that's doing well and we can go take our best shot with.”

Art Collector has proven to be anything other than pace-dependent during his current four-race winning streak. Though he wired the field in a Churchill allowance in June and again in the Runhappy Ellis Park Derby Aug. 9, he settled a few lengths off the speed in the GII Toyota Blue Grass S. and raced past Swiss Skydiver (Daredevil) to win with a bit in hand. Drury said that post three should give Brian Hernandez, Jr. some options.

“I would expect him to be forwardly placed until they get into the first turn and then Brian can decide where to go from there,” Drury explained. “Ideally you'd like to be forward going by the stands for the first time. One of my favorite things about this horse is that it seems like he's got a little stop-and-go to him. You can use him, but then get him to shut back off if you need him to. Sometimes in these races like this, that can be very beneficial. You can use him to get where you want him to be, but then get him to come back off the bridle and wait for another cue.”

Tom Drury's horse of a lifetime has taken the better part of 35 years to find. And he's very much enjoying the ride.

“We've had some really good horses go through the barn, but Art Collector has taken my career to places I never dreamed it would go. He's just a member of the family,” Drury said.