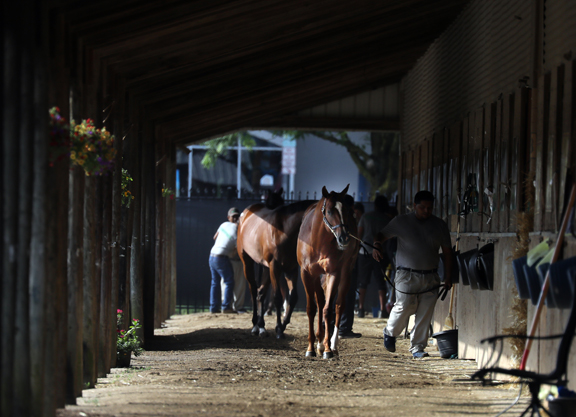 TIMONIUM, MD – The Fasig-Tipton Midlantic 2-Year-Olds in Training Sale, postponed from its traditional May date due to the coronavirus pandemic, kicks off its two-day run at the Maryland State Fairgrounds in Timonium Monday morning with bidding scheduled to begin at 11 a.m. A total of 563 juveniles were catalogued for the auction, with 154 listed outs as of Sunday afternoon.

Donato Lanni and owner Michael Lund Petersen who bought the $1.8-million future GI Acorn S. winner Gamine (Into Mischief) at last year's sale, were out shopping Sunday morning and stopped by the consignment of Bobby Dodd, who sold the record-setting filly in 2019.

Dodd, who returns with a five-horse consignment this year, is hoping for solid sales results despite uncertain conditions around the globe.

“Yesterday traffic [at the barn] was pretty good and today is better,” Dodd said. “I am seeing people today that I didn't see yesterday, so that's encouraging. I am hoping and praying it's going to be good for everybody, but down at OBS [Spring Sale], it was tough. It was either you are all in or not at all. We sold our horses at OBS and just basically got out of the trap, but we didn't get any cheese. Under the circumstances and the way the world is right now, I think that's what a person needs to do, unless you are planning on going racing.”

Gamine's seven-figure price tag was the most ever paid for a horse out of the Midlantic sales ring and highlighted an auction which set records for both gross and average.

“We sold a really nice horse a year ago and everyone is coming back and congratulating us,” Dodd said. “Last year, I really thought that filly was special. Obviously, I didn't know she was going to bring $1.8 million and I didn't really know how special she was, but I thought she was a really nice filly. I have some nice horses this year, I don't honestly think I have one like her. But you never know what's going to happen-how one is going to bloom.”

“Obviously we are in very difficult times, so it's very encouraging to see this many people here. We've been run off our feet,” Brendemuehl said.

Classic Bloodstock's main pre-sale attraction is a colt from the first crop of red-hot freshman sire Not This Time (hip 213) who worked in :10 1/5 during last week's under-tack preview.

“Yesterday we had 60 shows on 213 and probably more–I didn't record them all because I can't keep up,” Brendemuehl said.

“I keep my mares with Sally in Kentucky, so when Sally tells me she likes a horse, I listen,” Brendemuehl said. “My client and I went to get lunch at Ryleigh's Oyster Bar and all of a sudden there were a bunch of outs and he was coming up, so I called Peter Penny at the Fasig office and told him he had to bid on the horse for me. So we bought him and we named him Mr. Penny. He's been my favorite horse all year long.”

While declining to speculate on what the strength of the market will be in Timonium, Kip Elser said there were plenty of shoppers around his Kirkwood Stables consignment this weekend.

“Traffic is right about normal-certainly no less,” Elser said. “What that translates to for tomorrow and the next day, I couldn't begin to say, but so far we are right on par with the last couple of years as far as traffic.”

Elser had planned to offer a group of horses who would gallop at the under-tack show ahead of the Fasig-Tipton Gulfstream Sale in March, but with that boutique auction cancelled, the group all turned in quarter-mile works last week in Timonium.

“The [Gulfstream] sale was cancelled and the normal progression is that those horses would be breezing by this time of year,” Elser said. “So that's what we did. We put more bottom in them. We were actually considering going three-eighths here with all of them and just showing the logical progression to get to the races. But the way the track is laid out here, I didn't think coming right out of the paddock where it is gave them enough of a warm-up to go three-eighths. So we went quarters and galloped out. They were very consistent and did what they were supposed to do. And I hope that people see it as one more step on the way to getting to the races. This would have been our third year doing it. I still like the idea and the program just as much.”

While the recent OBS Spring Sale suffered declines, consignor David Scanlon is looking for increased action in Maryland as buyers adapt to market conditions and take advantage of the geography of an auction held within a few hours drive of several racetracks.

“I am highly optimistic [about the sale],” Scanlon said. “We brought more up here, I thought maybe with the little bit later start, it would give everyone time to get going. After seeing one sale already happen, I think people are going to see it's a buyers market. Plus, I think because of the location of the sale, people have been able to drive here. So I think it's going to be ok-as good as it can be everything considered.”