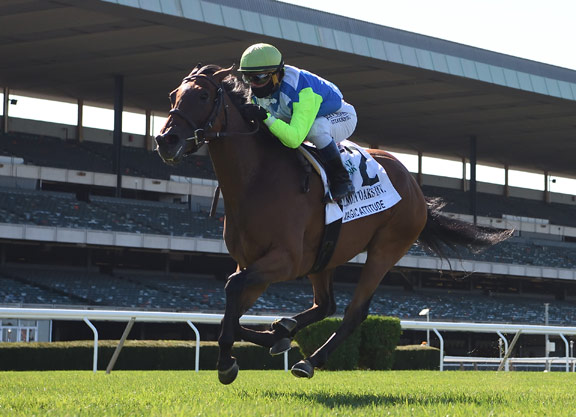 On a bright fall morning in Maryland, Arnaud and Leigh Delacour are diligently at work at their Fair Hill-based stable. Arnaud is on the phone, talking logistics with various jockey agents while inspecting a youngster that just returned from a workout. Meanwhile, Leigh leads a troop of four exercise riders and their mounts out for a light jog through the rolling pastures of Fair Hill. When she returns, they'll compare notes and move on to the next set.

It takes a special kind of relationship for a couple to successfully run a business together, but anyone that's trying should take notes from the Delacours. In just over a decade, they've taken hundreds of trips to the winner's circle and made several Grade I headlines. But if anyone asks, they will say they owe much of their success to a Frenchman and an Englishman who took the time to develop them into the horsemen they have become.

Arnaud grew up on a farm in Normandy and quickly realized his dream of one day becoming a successful trainer. He started out at Chantilly, becoming the assistant trainer to Alain de Royer Dupré. After testing the waters in France, England and Argentina, he eventually ended up in the States with fellow Frenchman Christophe Clement.

“Christophe was a very good teacher,” Arnaud said. “He's very intense in the way he trains, but I guess that's the French way so it doesn't really bother me. He's really hands on, is there every day and really puts young people on the right path.”

At the same time, Leigh was learning the tricks of the trade from British-born Graham Motion.

“I started out by loving horses as a child, and that took me to Graham Motion's barn at Laurel,” she recalled. “Working with Graham was the epitome of horse racing childhood. It was the Harvard education of racing.”

Leigh said that while she worked with Motion for over 10 years, the top-class trainer pushed her to graduate from college and take other opportunities in the industry, including a stint working under Barclay Tagg and with several other trainers.

While working with Graham and Anita Motion, she was introduced to Clement's assistant trainer at the time–Arnaud Delacour.

“Graham and Anita set us up on our first date,” Leigh said with a grin. “In fact, I give more of the credit to Anita. She's the one that said, 'That's the one you want. You should go there.' Graham would never say anything like that. He's too proper.”

It was a match perhaps made by the racing gods, because while they were compatible on a personal level, their racing ideology aligned as well.

“When we compared notes and talked about how we wanted to train, we looked at our playbooks and laid them on top of each other and realized they were nearly identical,” Leigh said.

When the duo went out on their own in 2007, they decided to base their operation at the picturesque Fair Hill Training Center in Elkton, Maryland.

“We chose Fair Hill because we thought it was a wonderful place,” Arnaud said. “There's a lot of opportunity as far as horse placement. We're in the middle of a lot of racetracks, so it was a little easier to be less stuck and try to place horses well to win races.”

Another major plus for planting roots at Fair Hill was the proximity to their matchmaking neighbors and close friends, Graham and Anita Motion.

“That was no small part of our decision to be here–my experience with them and wishing to emulate something like what they have,” Leigh said.

Both Arnaud and Leigh say they strongly believe that the lessons they learned from Motion and Clement were essential in getting their stable on its feet.

“Everything we do on a daily basis came from the methodology and thorough horsemanship that Arnaud and I learned from Graham and Clement,” Leigh said. “Their methods and ethics were something that we wanted to make sure we were ambassadors of going forward, hoping to be the next generation of what they were able to do.”

“When I first started with Clement I was at Payson Park, where it was the same kind of setup [as Fair Hill] with paddocks and round pens,” Arnaud said. “So a lot of the things we do are in more of a farm setting than a racetrack. I got used to Christophe's methods and the way he does things, and Graham is really similar to Christophe.”

Leigh continued, “We would do anything for them. They went out of their way to get us started and we're the competition. Of course, we weren't when we began. We weren't at that level then. But we still look up to them now.”

Since first starting out, the Delacours have collected dozens of stakes win and developed several graded stakes winners–most notably A.P. Indian (Indian Charlie), who went on a six-race stakes-winning streak in 2016, raking in four graded stakes titles including two Grade I wins at Saratoga.

“Any win is important,” Arnaud said. “But when A.P. Indian won the GI Forego S. that was pretty special. Actually, no, even when he won the GI Vanderbilt H., because winning a Grade I at Saratoga is great, but winning two in three weeks is even better.” 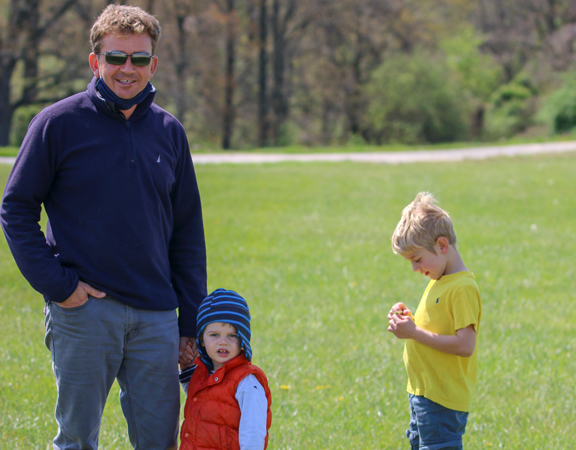 A.P. Indian was reminiscent of many of the Delacour's trainees in that he raced at 11 different tracks over his six-year career.

Most recently, their sophomore filly Magic Attitude (GB) {Galileo (Ire)} made her Stateside debut a winning one with a late effort in the GI Belmont Oaks Invitational S. this September. In her next start, she ran in the money in the GI Queen Elizabeth II Challenge Cup S. at Keeneland.

When Arnaud and Leigh are not busy tending to Grade I performers, they can be found entertaining their three young son.

“They're all healthy and smart and funny,” Leigh said. “With the pandemic, we're also homeschooling right now. Our goals are to raise our sons and enjoy horse racing, wherever and however that meshes together.”

Leigh cites Fair Hill as the perfect setting for introducing their children to the horse world.

“It's kind of nice to stop by at night with the kids in their pajamas and walk down the shed row to give everyone peppermints. When we go home the kids smell like the barn and usually have dirty hands, but that's okay.”

Both Arnaud and Leigh stress the essentiality of their unwavering teamwork.

“It's a partnership,” Arnaud explained. “She keeps me on the right path. We decide everything together pretty much. She's really good at what she does. So I think it's a great partnership that works really well.”

“Arnaud and I working together has never been a problem,” Leigh said. “I think Anita chose well for me. He seeks my opinion on a lot of things pertaining to the racehorses and I seek his about the children and the finance side of the barn. There's a joke with the staff that if we ever divorce, some of the guys are going to work for me and some are going to work for Arnaud. They've already chosen sides. But it's easy for us to work together and I realize it's not for some people, but the way our relationship works is very mellow.”

For Leigh, she says that her greatest achievement has been helping Arnaud fulfill the dream he had as a young boy on a small farm in France.

“Arnaud's dream from childhood was to be a horse trainer,” she said. “Every winner is rewarding for us, for the mentality of our barn employees and for all the time, money and energy that each of the owners invests in their horses and in us. We try to do our best every day and it's a privilege for us to get to come out every morning and do that.”