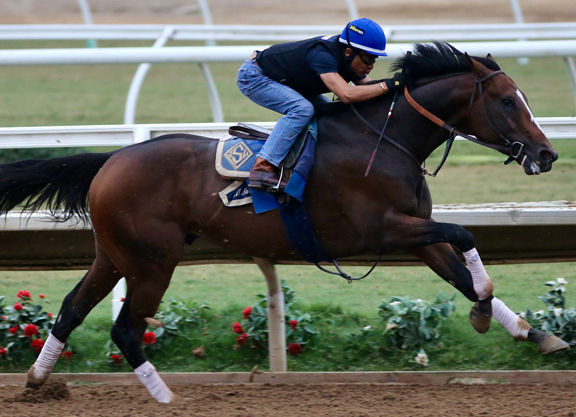 With the marquee race of the meet, the $1-million GI TVG Pacific Classic just seven days down the road, a number of hopefuls for the 10-furlong feature got in their final serious works at Del Mar Saturday morning.

Trainer John Sadler could send out as many as three runners in the Pacific Classic, including Campaign (Curlin), who will actually be cutting back in distance after annexing the GIII Cougar II H. over 12 furlongs July 24. With jockey Rafael Bejarano in the irons, Campaign was given 1:04 flat for five furlongs before galloping out three-quarters of a mile in 1:15.80. Higher Power (Medaglia d’Oro), a latest second as the favorite in the restricted Wickerr H. at a mile on turf July 21, covered six furlongs in 1:13.40.

“An impressive work, [leading jockey Flavien] Prat was very happy with him,” Sadler said of the Higher Power exercise. “Campaign went a little slower but he finished up well and Bejarano was happy with him.”

Hronis Racing’s Catalina Cruiser (Union Rags) made it two wins from as many starts when taking out the GII San Diego H. at a mile and a sixteenth July 20 and went five furlongs in 1:00 flat in splits of :24.40, :35.40 and :47.60 before galloping out six furlongs in 1:13 flat. Connections could yet bypass the Classic in favor of a title defense in the seven-furlong GII Pat O’Brien S., a “Win and You’re In” qualifier for the GI Breeders’ Cup Dirt Mile.

“Catalina Cruiser went really well and I’ll come out with what my plan is for him maybe tomorrow,” Sadler said.

Pavel (Creative Cause), runner-up to the Sadler-trained Accelerate (Lookin At Lucky) in last year’s Classic, went a half-mile in :49.40 Saturday morning. Mario Gutierrez has the call on the well-traveld 5-year-old, a latest third to Preservationist (Arch), in the GII Suburban S. at Belmont July 6.

“He galloped out with great energy and we’re very happy with him,” trainer Doug O’Neill said.

Draft Pick, a son of 2003 Classic winner Candy Ride (Arg) and exiting a third to Catalina Cruiser in the San Diego, galloped five-eighths of a mile in 1:00.60 for trainer Peter Eurton.