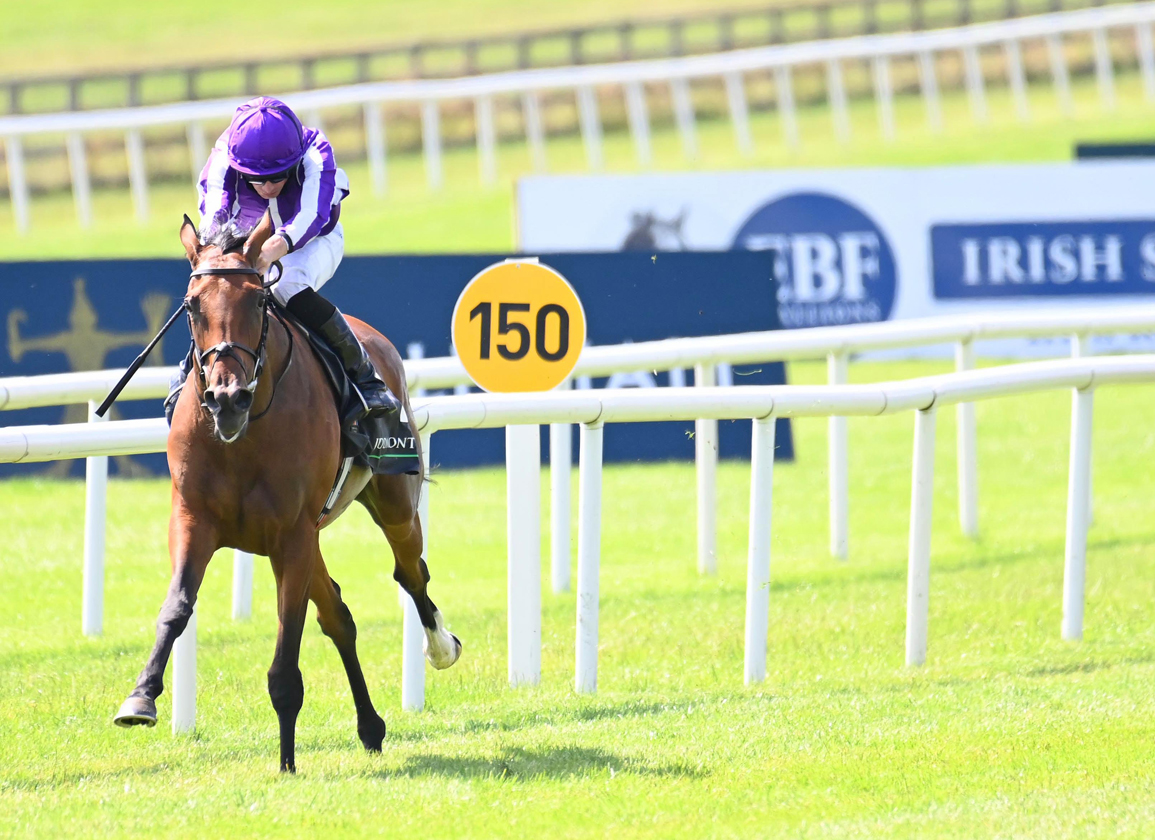 It was a mere 8 1/2-length margin on Saturday as Snowfall (Jpn) (Deep Impact {Jpn}) read the script to become the 15th filly to follow up her G1 Epsom Oaks success in The Curragh's G1 Juddmonte Irish Oaks. Always travelling comfortably in fourth under Ryan Moore, the 2-7 favourite coasted to the lead two out and powered clear in now-customary fashion to put safe distance between her and stablemate Divinely (Ire) (Galileo {Ire}), with Nicest (Ire) (American Pharoah) half a length back in third. While there was no repeat of her astounding 16-length victory in the June 4 Classic, this still represented another impressive marker laid down to the rest of Europe's middle-distance leaders by Ballydoyle's latest sensation. “She's a high-class filly, is straightforward and she has done what she was entitled to do,” commented Ryan Moore, who after a barren spell was bringing up a fourth group 1 or grade I win for the stable in five in the space of two weeks. “We went a good honest pace and we had to fight for a little bit of room off the bend, but she has plenty of class. She has done nothing wrong this year and is very exciting. I wouldn't say anything is too much of a problem for this filly.”

Breaking her maiden in the seven-furlong maiden at this meeting 12 months ago, having almost been brought down when clipping heels on her second start over the same course and distance, Snowfall gradually slipped down the pecking order with four efforts hardly screaming dual Classic winner at three. Fourth in Leopardstown's G3 Silver Flash S. and fifth in the G2 Debutante S. here in August, she was ninth in the G1 Moyglare Stud S. in September prior to running eighth when mistaken for Mother Earth (Ire) (Zoffany {Ire}) in the G1 Fillies' Mile at Newmarket in October. Amazingly, she was 14-1 when dismissing the much-vaunted pair of Noon Star (Galileo {Ire}) and Teona (Ire) (Sea the Stars {Ire}) in the G3 Musidora S. over an extended 10 furlongs at York May 12 and passed over by Moore in favour of Santa Barbara (Ire) (Camelot {GB}) in the Oaks and it was Frankie Dettori who enjoyed the long-to-be-remembered cruise through the Epsom feature as a result.

Anything other than an emphatic win here would have been questioned and Snowfall did not disappoint to provide Aidan O'Brien with a sixth renewal to take him level with Sir Michael Stoute for the record. “She's very smart and she has a lot of quality,” he said. “We purposely let her down a little bit from Epsom, because the season is going to roll on and it was soft ground there. The plan was to come here, go on to the [G1] Yorkshire Oaks [at York Aug. 19] and then she'd be ready for the autumn. I'm delighted with her and she's done very well from Epsom physically, she's got very big and strong. Ryan said she has a lot of speed. She goes very strong and she finishes out very well.”

Reflecting on last term, the master of Rosegreen added, “She's a filly that always had a lot of natural ability and we had to get her to relax a little bit, so we didn't worry too much about it as we were always concentrating on switching her off. Things went against her. Her first run was over five-and-a-half furlongs in Navan and Mother Earth was second. Then she came back here to a maiden and Seamus nearly fell off her. That's why it took a few runs to win a maiden and it might have been a blessing in disguise, as she became very mature and grown up from it mentally. Because she was busy early in the season it might have took it's toll at the end of the season, even though she was perfect mentally. She and Mother Earth ran in the Fillies' Mile and we were nearly siding with her over Mother Earth. That's what we always thought of her. We always thought fast ground was her thing and I was very worried in Epsom about her with that ground.”

Bred in the purple she carries, Snowfall is the first foal out of Best In the World (Ire) by the much-missed Galileo (Ire) whose two successes came in the G3 Give Thanks S. and the Listed Silken Glider S. and who was also runner-up in the G2 Blandford S. She is a full-sister to the G1 Prix de l'Arc de Triomphe and GI Breeders' Cup Turf heroine Found (Ire), who the winner could stand comparison with in time, as well as the G3 Weld Park S. winner Magical Dream (Ire) and the G3 Flame of Tara S. scorer Divinely (Ire) who was third in the Epsom Oaks and runner-up here. Found is in turn the dam of last year's G2 Vintage S. and Listed Chesham S. winner and GI Breeders' Cup Juvenile Turf and G1 St James's Palace S.-placed Battleground (War Front). The second dam is the G1 Lockinge S. and G1 Matron S. heroine Red Evie (Ire) (Intikhab). Best In the World has the unraced 2-year-old full-brother to Snowfall named Newfoundland (Ire) and a yearling colt by Dubawi (Ire).