Deep Impact's Snowfall A Class Apart In The Oaks 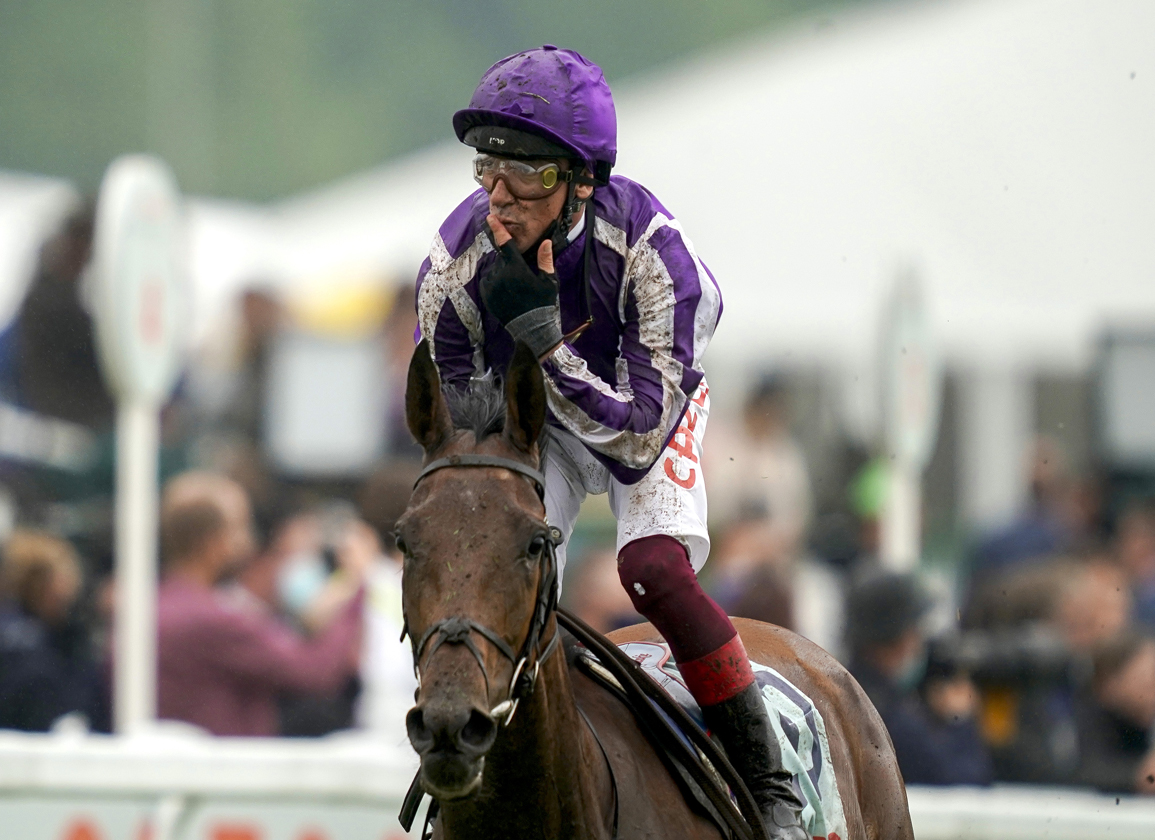 Aidan O'Brien saddled five in Friday's G1 Cazoo Oaks at Epsom, but ultimately there was only one that mattered as Snowfall (Jpn) (Deep Impact {Jpn}) ran away with the prize by a record-setting margin of 16 lengths under Frankie Dettori. Serving notice that she had turned around her fortunes from a largely disappointing juvenile campaign when making all in the G3 Musidora S. at York May 12, the 11-2 shot arrived from rear under a tight hold to brush aside Mystery Angel (Ire) (Kodi Bear {Ire}) passing two out. Sprinting clear in scintillating fashion against the stand's rail, it was exhibition stuff from the relative of Found (Ire) (Galileo {Ire}) as she provided her rider with a sixth Oaks and her trainer with a ninth. Mystery Angel held on gamely for second at 50-1, heading the clutch of outclassed fillies 1 3/4 lengths in front of Snowfall's stablemate and relative Divinely (Ire) (Galileo {Ire}). Frankie summed up the general feeling afterwards when saying, “That was unbelievable. I wanted a better position, but they went off way too fast so I let them get on with it. Four out I had everything beat. I looked in front and they were all gone. I just cut through the middle–it was like a hot knife through butter. It was quite remarkable, because I pulled up by the stables and everybody else pulled up by the winning post! I've won many Classics, but none as easy as this one. Enable did the Irish Oaks, King George and Arc as a 3-year-old after this and I wouldn't put that past her, she's that good.”

When Snowfall beat the much-vaunted Noon Star (Galileo {Ire}) and Teona (Ire) (Sea the Stars {Ire}) effectively pulling a cart at 14-1 in the Musidora, there was a sense of general surprise given that every time she had come up against quality opposition at two she had been found wanting. Incredibly, she was involved in the notorious mix-up with Mother Earth (Ire) (Zoffany {Ire}) in the G1 Fillies' Mile at Newmarket in October and having been called third initially was later confirmed as having finished eighth behind that eventual G1 1000 Guineas heroine. That Frankie should ride both to separate Classic success with all at Rosegreen infatuated with TDN Rising Star Santa Barbara (Ire) (Camelot {GB}) is a twist of fate which stretches even the wildest imagination and the manner of this performance was simply extraordinary given the competitive look of the race beforehand.

If things had fallen differently for Snowfall early in her 2-year-old career, she may have been coming here as the stable number one instead of able deputy. She must have kidded them at Ballydoyle before she set foot on a racecourse, as she was introduced over an extended five furlongs at Navan in June and, with the benefit of this kind of hindsight, managed something unusual by finishing third behind the super-charged Frenetic (Ire) (Kodiac {GB}) with Mother Earth in second. In what could have been a sliding doors moment, she clipped heels when coming to win her second start over seven furlongs at The Curragh later that month and was lucky to stand up. Despite going back to that same course and distance to break her maiden three weeks later, that incident may have had a lingering effect as her next four starts resulted in off-the-board efforts. Fourth in Leopardstown's G3 Silver Flash S. and fifth in The Curragh's G2 Debutante S. in August, she was only ninth in the G1 Moyglare Stud S. in September prior to another no-show running as the wrong filly in the Fillies' Mile.

Aidan O'Brien may not have been able to foresee such a dynamic performance, which puts her front-and-centre among the Classic generation and will take some matching in Saturday's Derby, but he did reveal that he had an inkling the winner was capable of something unique beforehand. “We really thought she was a proper group one filly last year and she kept disappointing,” commented the Ballydoyle handler, who is ripping up the rule books equalling John Scott's 185-year-old record of 40 British Classic winners. “Little things happened to her in races and stuff like that. She was very impressive at York and maybe she's just got a bit stronger over the winter and the extra distance helped. She's by Deep Impact out of a full-sister to Found, so it's an unbelievable pedigree. When ground turns like that, you can sometimes get extreme distances but Frankie gave her a very good ride and she looks a very special filly.”

Of Santa Barbara, who ended up fifth as the 5-2 favourite, he added, “Ryan said she cantered into the race and then, in that ground, she just emptied out on him. She'll probably go back to a mile and a quarter next. She has loads of class. We thought that she would handle that ground, but in that going staying the trip was the worry with the pace she has. She's a big, powerful, strong filly.”

Snowfall is the first foal out of the ambitiously-titled and now aptly-named Best In the World (Ire) by the stellar sire Galileo who has such a major influence again on Saturday's Derby. Her two wins in blck-type company came in the G3 Give Thanks S. and the Listed Staffordstown Stud S., while she was also runner-up in the G2 Blandford S. and third in the G3 Munster Oaks. As mentioned, she is a full-sister to the G1 Prix de l'Arc de Triomphe and GI Breeders' Cup Turf heroine Found, as well as the G3 Park S. winner Magical Dream (Ire) and last year's G3 Flame of Tara S. winner Divinely who chased her home here. Found is in turn now the dam of last year's G2 Vintage S. winner and GI Breeders' Cup Juvenile Turf runner-up Battleground (War Front). These four Galileo siblings are out of the G1 Lockinge S. and G1 Matron S. heroine Red Evie (Ire) (Intikhab). Best In the World's unraced 2-year-old full-brother to Snowfall is in training at Ballydoyle and named Newfoundland (Ire), while she also has a yearling colt by Dubawi (Ire).