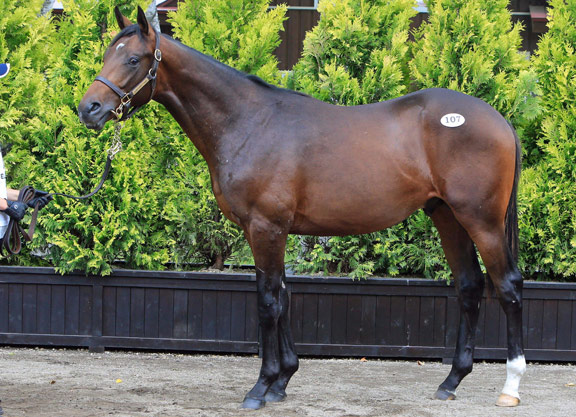 Eclipsing record overall results from the past two years, the Japan Racing Horse Association select sale soared into new territory during the opening yearling session July 13, raising the bars for gross and average.

Kenny Troutt's WinStar Farm helped contribute to the records, buying three colts in a historic first for an American-based stable since the JRHA sale was started in 1998.

“We've never been so high before. We are so surprised, so happy,” exclaimed a beaming Katsumi Yoshida, the leading consignor through his Northern Farm and affiliates, after seeing session gross reach ¥7,104,500,000 (about $57,294,355), up a whopping 17.9% compared to the corresponding 2014 yearling session.

Eight yearlings surpassed the ¥100-million level, with six of those selling for the equivalent of more than $1 million. Hip 107, a colt by the world's leading sire by progeny earnings, Deep Impact (Jpn) (Sunday Silence), topped the session on a bid of ¥235 million ($1,895,162) from prominent owner and gaming executive Hajime Satomi.

“This is an amazing market,” Yoshida said. “The quality of the horses we offered this year was the best ever, so I expected a strong market, but these figures are far, far more than I expected.”

The clearance rate reached 88.2%, another record for a JRHA yearling session, and Yoshida pointed to that figure as one of the most significant.

“This means there are many buyers, and I am very glad to have so many horse lovers at this sale,” he said.

Yoshida also acknowledged another significant sale highlight, the participation by foreign buyers. WinStar was joined in the buying action by trainer Gai Waterhouse and owner Phil Sly, both of Australia.

With bloodstock agent John McCormack signing the tickets, WinStar ranked as the sale's eighth leading buyer with a total of ¥143 million ($1,153,228).

WinStar President and Chief Executive Elliott Walden said he felt it was an honor to take the first steps by an American stable into the rapidly evolving world of Japanese breeding, which last year was responsible for the world's two highest-rated racehorses, Just a Way (Jpn) (Heart's Cry {Jpn}) and Epiphaneia (Jpn) (Symboli Kris S). Walden was joined as a first-time visitor to the sale by several of his Kentucky colleagues–Ashford Stud Manager Dermot Ryan, Gaineway's Michael Hernon and Airdrie Stud's Bret Jones–but he was the only buyer among them during the yearling session.

Walden picked out two colts by Empire Maker (Unbridled) in addition to a colt by Heart's Cry (Jpn) (Sunday Silence) who is the second foal of American Grade 1 winner Hilda's Passion (Canadian Frontier). The trio will be sent back to Kentucky, with plans still to be made for their futures.

Beyond the records and the foreign visitors, Deep Impact once again towered above all as the driving force of the JRHA sale, just as he has been ever since his first offspring arrived at this market as foals in 2008.

The session-topping Deep Impact colt (hip 107), a half-brother to G1 Cheveley Park Stakes winner Lightening Pearl (Ire) (Marju {Ire}) produced by Irish stakes winner Jioconda (Ire) (Rossini), was among those who came from the 80-strong group of yearlings catalogued under the banner of Northern Farm. A regal bay, the colt was an obvious choice for Satomi since the owner races his half-brother, Group 2 winner Satono Crown (Jpn) (Marju {Ire}), who finished third in this year's G1 Tokyo Yushun (Japanese Derby).

Satomi said his expectations for the yearling are high.

“Satono Crown has a very, very good turn of speed, and that's a specialty of Deep Impact, too. So, I believe this horse is going to have a brilliant turn of foot,” Satomi said, adding that his trainer, Noriyuki Hori, gave the colt high marks.

“The price was more than I thought, but this was one I couldn't miss,” Satomi said.

Not long after the session started, Satomi plunged in for his first purchase over ¥100 million, prevailing in a sparring match with Makoto Kaneko for hip 19, a nearly black Deep Impact colt, on a bid of ¥195 million ($1,572,581). Northern Farm also consigned that colt, who is the first foal out of New Zealand champion King's Rose (NZ) (Redoute's Choice {Aus}).

“When I went to Northern Farm to inspect sale horses, I liked this colt a lot,” Satomi said, “and my adviser, Yasuo Ikee (who trained Deep Impact), highly recommended him, so I decided to buy him, but that was my final bid.”

Satomi finished the day as the session's leading buyer, making seven purchases for a total of ¥763,000,000 ($6,153,226). His primary rival for top-level horses was Kaneko, the savvy software services specialist who succeeded in buying the co-second highest priced yearlings, colts by Deep Impact and Tapit, that each brought ¥230 million ($1,854,839).

Later in the session, Kaneko calmly succeeded in determined bidding for one of the other most highly prized colts, a spotted gray son of Tapit (Pulpit) (hip 108)out of multiple Grade 1 winner Champagne d'Oro (Medaglia d'Oro) from Teruya Yoshida's Shadai Farm consignment.

Shadai had purchased Champagne d'Oro, a half sister to GI Belmont S. winner Ruler On Ice (Roman Ruler), for $2.7 million at the 2013 Fasig-Tipton November sale while she was carrying the Tapit colt.

Kaneko, as is often his custom, declined media requests for comment after making his purchases.

A new major player to the JRHA scene is Kieffers Co. Ltd., which was the buyer listed for the other two yearlings that brought the equivalent of more than $1 million, a filly and a colt both sired by Deep Impact and sold just minutes apart.

Masaaki Matsushima, based in Kyoto and best known for luxury automobile sales, is the man behind Kieffers. He is relatively new to racing but apparently unafraid to spend big money for yearlings.

Kieffers' first acquisition was hip 71, Deep Impact's elegant colt out of European champion Sarafina (Fr) (Refuse To Bend {Ire}), from the Shadai consignment. The colt is Sarafina's first foal and was sold for ¥160 million ($1,290,323).

Action during the session was hot most of the day, just like the Hokkaido weather, which was humid and a bit stifling. Crowds packed the Northern Horse Park pavilion, often breaking into applause when bidding reached a crescendo.

Among the observers was Gainesway's Michael Hernon, who said he felt it was important to visit Japan's premier sale partly because Gainesway has Japanese clients and Japanese buyers regularly come to American sales. He also wanted to see Shadai's Tapit colt, the only yearling in the sale by the Gainesway stalwart who ranks as America's leading sire.

“He's a really good horse; there's no question he's a standout,” Hernon observed of the colt. “He's got a tremendous pedigree, top and bottom, and he looks the part. He's got size and scope, and he's a top yearling in this market, for sure, and he would be in the U.S. too.

Added Hernon, “Bloodstock is an international commodity and becoming more so. The quality of the Japanese bloodstock has gone to the highest level and they're to be commended for it.”

There were several other international connections participating in the JRHA yearling session.

“We are delighted with the sale,” said Runnymede General Manager Romain Malhouitre. “He showed and looked very good during his time at the sale. We cannot say enough about the professional and special care that Shadai Farm has provided to our horses over the years. We understand that he is going to a good home and wish the new connections the best of luck.”

The Niarchos family also offered a yearling, selling hip 205, a filly by Heart's Cry out of Sapas (Kingmambo) to Hiroyuki Asanuma for ¥22 million ($177,420).

In just one of many moments that makes the JRHA sale unique among its counterparts around the world, officials held a charming opening ceremony featuring one of the miniature horses that stars in the Northern Horse Park's popular “Happy Pony Show” that draws lines of people daily.

The tiny chestnut splashed with white named Yama-chan bowed and reared to applause from buyers after four owners were honored with gold medals for horses they had bought at previous JRHA select sales that went won Group 1 races in 2014.

This story was posted in Today's Edition.