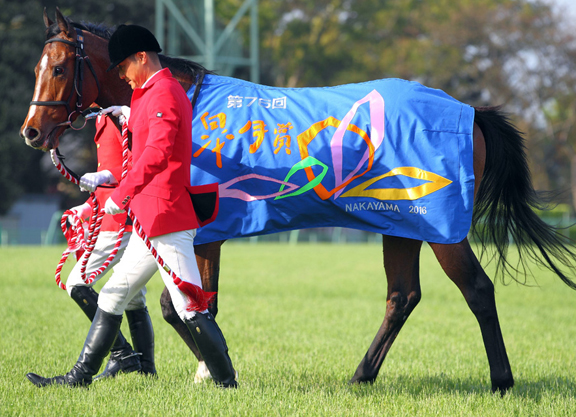 Dee Majesty after his Classic victory in April | Horsephotos

Held up third last and one off the fence as Key Cracker (Jpn) (Jungle Pocket {Jpn}) led, followed by Ken Hovawart (Jpn) (Marvelous Sunday {Jpn}) and Peace Mind (Jpn) (Deep Impact {Jpn}) through 1000 metres in 1:01 flat, favored Dee Majesty (Jpn) was shaken up by Masayoshi Ebina and made steady forward progress approaching the far turn. Motoring up on the extreme outside and into contention as the field charged into the straight with new leader Seewind (Jpn) on top, Dee Majesty tackled that foe inside the final 200 metres, while Prodigal Son (Jpn) unleashed a similar move to his outside. Ebina implored his charge for everything he had and Dee Majesty responded with a late burst, winning by a neck over Seewind, with Prodigal Son 1 1/4 lengths back in third, giving their Shadai Stallion Station-based sire the trifecta. The G2 Asahi Hai St. Lite Kinen is a prep for the 3000-metre G1 Japanese St Leger (Kikuka Sho) slated for Oct 23 at Kyoto.

Dee Majesty, runner-up in both of his first two trips to the post–in a Sapporo newcomer heat last September and at Nakayama later that month, graduated going 2000 metres at Tokyo Nov. 23. Scratched out of the Dec. 27 G2 Hopeful S., the son of Deep Impact landed the G3 Kyodo News Service Hai cutting back to 1800 metres on Valentine's Day and delivered a shock result when gaining his first Classic win at 30-1, defeating Makahiki (Jpn) (Deep Impact {Jpn}) and Satono Diamond (Jpn) (Deep Impact {Jpn}) in the G1 Satsuki Sho (Japanese 2000 Guineas) stepped back to 2000 metres Apr. 17. Dee Majesty reported home third to that duo in the 2400-metre G1 Tokyo Yushun (Japanese Derby) May 29.