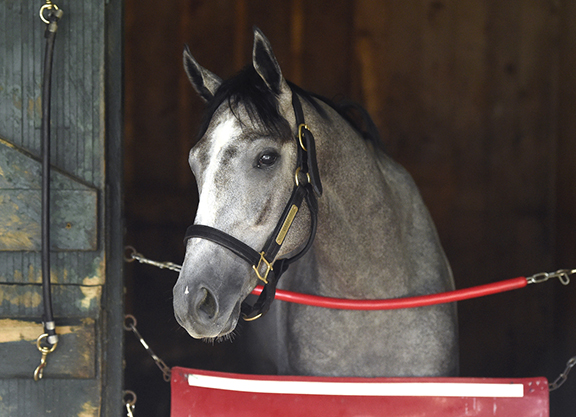 SARATOGA SPRINGS, NY – As impressive Churchill debut winner and ‘TDN Rising Star’ Mo Diddley (Uncle Mo) continues to train up to the GII Saratoga Special S. Aug. 13, trainer Mark Casse has several other promising juveniles in the pipeline nearing debut this summer/early fall. “We’ve got a pretty strong bunch of 2-year-olds,” Casse said. “We feel that some of these horses could be future stars.” TDN’s Senior Editor recently caught up with Casse at the Spa to get the scoop.

Produced by a half-sister to champion Will Take Charge (Unbridled’s Song) and GISW Take Charge Indy (A.P. Indy), He Takes Charge brought $625,000 as a Keeneland September yearling. This is also the female family of champion Take Charge Brandi (Giant’s Causeway). “He belongs to Bill Schettine and Mr. Oxley and he’s about ready to run. He’s out of that [MGISW second dam] Take Charge Lady family,” Casse said. The gray was bred in Kentucky by Schettine, who also campaigned the 0-for-9 mare Elarose, an $800,000 KEESEP yearling purchase herself. He Takes Charge covered four furlongs in :48.56 (7/99) at Saratoga July 22.

MISSISSIPPI (c, 2, Pioneer ofthe Nile–Katz Me If You Can, by Storm Cat)

Mississippi was purchased for $700,000 by John Oxley and the Coolmore partners after breezing an eighth in :10 2/5 at the Fasig-Tipton Gulfstream Sale. The $280,000 KEESEP yearling, bred in Kentucky by Whisper Hill Farm, is out of the Overbrook homebred Katz Me If You Can, a two-time graded winner of $410,947. Katz Me If You Can realized $510,000 from Mandy Pope’s operation at the 2009 KEENOV sale. “He’s a colt that we really like,” Casse said of Mississippi. “He’s trained well–better than average–and will end up at Saratoga.” Mississippi worked four furlongs in :49.60 (29/77) at Casse’s Churchill base July 16. It was announced earlier this spring that Oxley’s champion and narrow GI Preakness S. runner-up Classic Empire (Pioneerof the Nile) would stand at Coolmore America’s Ashford Stud upon his retirement from racing.

Wonder Gadot will carry the pink-and-black silks of film producer Gary Barber. The chairman and CEO of MGM named the filly after actress Gal Gadot, known best for her role as Wonder Woman. The $80,000 KEESEP yearling turned $325,000 OBSAPR juvenile (:10 2/5) posted three works at Casse’s Ocala base before shipping to the Spa. “Normally the Canadian-breds go to Canada, but she’s trained so well that she’ll probably get a start at Saratoga,” Casse said. Bred in Ontario by Anderson Farms Ont. Inc., Wonder Gadot is a full-sister to Solemn Tribute, SW & GSP, $181,234. Her second dam is 2002 GIII Tempted S. heroine and 2003 GI Prioress S. runner-up Chimichurri (Elusive Quality).

Sly Roxy is the first foal from Eugene Melnyk’s two-time Canadian champion homebred Roxy Gap. “Yeah, she does remind me of her a little bit. Roxy Gap was a very good filly for us,” said Casse, who also trained Sly Roxy’s three-time graded winning dam. “This filly is showing us a lot of things that we like. Most of the horses that we take to Saratoga earn their way up there.” Sly Roxy, owned by George Yager, will need a pair of scratches to draw into the fifth race at Saratoga Thursday, a 5 1/2-furlong maiden special weight on the grass. Bred in Kentucky by Blue Heaven Farm LLC, Sly Roxy RNA’d for $190,000 as a KEESEP yearling and for $195,000 at OBSMAR (:10). Fred Hertrich III, agent, signed the ticket on Roxy Gap for $850,000 at the 2013 FTKFEB sale.

D’Argent de Miel punched her ticket to upstate New York with some smart works at Belmont Park, including a best-of-41 four-furlong bullet in :48.42 July 5. “We only got her about 60 days ago or so, but she’s a filly that I’ve been impressed by in her works,” Casse said. “We plan on running her fairly early in the Saratoga meeting.” Bred in Kentucky by Anastasie Astrid Christiansen-Croy, her dam Dance Tale, an Edward P. Evans homebred, made her only career start a winning one at Aqueduct.

Curlin’s Honor, the $1.5-million topper from the Fasig-Tipton Midlantic 2-Year-Olds in Training Sale (:10), will spend his summer at Casse’s Churchill Downs base, following the same blueprint as ‘TDN Rising Star’ and last year’s GI Breeders’ Cup Juvenile Fillies runner-up Valadorna (Curlin) as well as narrow 2015 GI Breeders’ Cup Juvenile Turf runner-up Airoforce (Colonel John). He will be campaigned in partnership by Oxley and Breeze Easy. “We leave a lot of good horses in Kentucky in the summertime now,” Casse said. “That fall meet starting in September [at Churchill Downs] is a good meet and is a good way for us to get started.” Curlin’s Honor, bred in Florida by Miller Racing, was produced by a winning mare and is a half-brother to a pair of stakes winners. He also topped the 2016 Fasig-Tipton Kentucky July Yearling Sale at $475,000.

This long-striding son of Tiznow already made his share of headlines earlier this spring, bringing a record $2.45 million from Oxley and the Coolmore partners at the OBS April Sale (:9 3/5). “He’s special,” Casse said. Bred in Kentucky by WinStar Farm, the $125,000 KEESEP yearling’s second dam is MSW Storm Beauty (Storm Cat). Along with Stonestreet’s Telekinesis (Ghostzapper), another colt that Casse referred to as “something special (see below),” the duo could both make their debuts later this summer in the Bluegrass. “This is a little different for us, but they will probably make their first starts at Ellis,” Casse said. “These are horses that we may want to let settle and don’t want to have them rushed off their feet. Obviously, you know what we’re thinking about–there are some big races in November and those our concentration.” Conquistador worked five furlongs in 1:01.60 (10/32) at Churchill July 24.

This aforementioned $470,000 KEENOV weanling purchase by Barbara Banke’s Stonestreet Stables was produced by an unraced daughter of two-time GII Princess Rooney H. heroine and millionaire Gold Mover (Gold Fever). “He’s a Ghostzapper colt for Stonestreet that looks like he could be something special,” Casse said. The bay’s worktab includes a best-of-57 four-furlong move in :47 in Lexington in mid-June. He was bred in Ontario by William D. Graham.