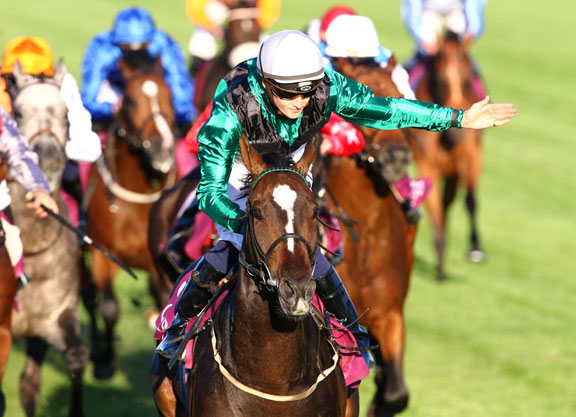 Deauville’s month-long festival wraps up on Sunday, with the G2 Lucien Barriere Grand Prix de Deauville set up for a possible fairytale story for connections of the Czech raider Nagano Gold (GB) (Sixties Icon {GB}). Last seen pushing Defoe (Ire) (Dalakhani {Ire}) to a half length in Royal Ascot’s G2 Hardwicke S. on June 22, the 5-year-old impressed many on that occasion and was arguably unlucky not to have collected. If he reproduces that effort, he should be able to account for some exposed older horses including the Wertheimers’ June 30 G1 Grand Prix de Saint-Cloud runner-up Ziyad (GB) (Rock of Gibraltar {Ire}) with Henri Devin’s 4-year-old filly Villa Rosa (Fr) (Doctor Dino {Fr}) the only unknown in the line-up following her June 23 Listed Grand Prix de Lyon success.

Goodwood hosts the G3 Supreme S. in which Limato (Ire) (Tagula {Ire}) looks for the perfect warm-up for the G2 Challenge S. he has won on the last two occasions, while at Baden-Baden the G2 Goldene Peitsche is the stage for a match between Gestut Brummerhof’s G3 Hackwood S. winner Waldpfad (Ger) (Shamardal) and Lord Lloyd-Webber and Will Farish’s G3 Summer S. winner Royal Intervention (Ire) (Exceed and Excel {Aus}).