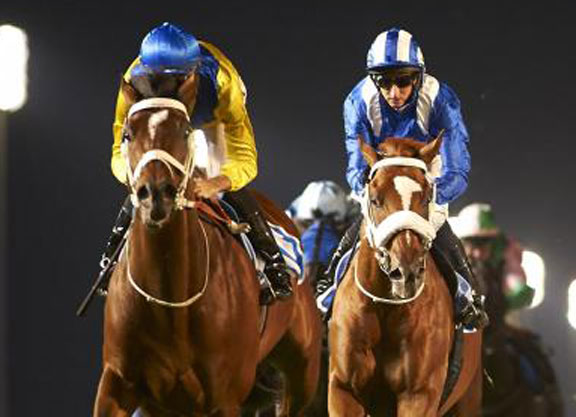 Trainer Mike de Kock had three chances Thursday to extend his Al Rashidiya tally to eight–and five straight–and the South African’s team nearly delivered the ultimate dream result, filling the first two spots with Mujaarib (Aus) (Nadeem {Aus}) nosed out for third. The winner, Forries Waltz, proved another shining example of de Kock’s ability to place a horse, as he was rolling the dice and taking a class jump from handicap company. In fairness to the horse, however, Forries Waltz had lost just once in six prior starts and was a stakes winner in his native South Africa. Unbeaten in three starts in that country as a 2-year-old, Forries Waltz headed to quarantine after winning the Listed Gatecrasher S. in June of 2014. He made just one start at last year’s carnival, finishing a disappointing 11th in conditions company after finding trouble in running. He had a clear passageway going a mile on seasonal debut here two weeks ago, and proved well up to the grade Thursday. Sitting midpack on the outside for the run down the backstretch, Forries Waltz was about six lengths off the lead coming off the turn as Ennobled Friend (Malibu Moon) and Battle Of Marathon (War Front) led the charge into the lane with Ertijaal, Forries Waltz’s G1 Cape Derby-winning stablemate, breathing down their necks. Ertijaal, who was making his first start off the quarantine period, took the lead in midstretch but was quickly collared and run down by Forries Waltz, with the third de Kock trainee, Mujaarib (Aus) (Nadeem {Aus}), finishing fast up the middle of the track and just failing to grab third.

“He’s changed a lot since last year,” said Soumillon. “Today we had a good run in midfield. We were worried about the [wide] draw, but he jumped not too bad and took a good position in midfield. When I saw Ertijaal going in the straight quite easily I knew I could catch up but was just hoping he needed the run.”

“He was fit and in form,” de Kock added. “The real class was Eritjaal on paper, Forries Waltz was the up-and-comer and we weren’t really sure how good he was. It’s a race we target every year and it’s nice to win it, and I’d expect a massive amount of improvement from the second horse [Ertijaal].”