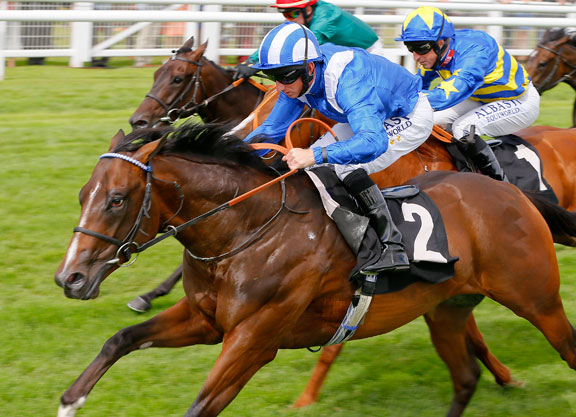 The DBS Premier Sale, which starts its two-day run at 10 a.m. Tuesday, has carved a niche as an auction boasting precocious, speedy types and it posted improved figures across the board in 2014 when amassing £15,512,500 for 419 horses sold at an average price of £37,101 and a healthy 88% clearance rate.

Its star graduates from that book 12 months ago include Sheikh Hamdan Al Maktoum's Tasleet (GB) (Showcasing {GB}), a £52,000 yearling who won the listed Rose Bowl S. at Newbury and finished runner-up to the mighty Shalaa (Ire) (Invincible Spirit {Ire}) in the G2 Vintage S. before landing almost £150,000 in prize-money when winning last Thursday's DBS Premier Yearling S. for the in-form stable of William Haggas.

Tasleet was bred by Whitsbury Manor Stud, the Hampshire nursery which prides itself on its speedy bloodlines and stands last year's leading British-based freshman Showcasing. This time around Whitsbury Manor consigns Tasleet's half-brother (lot 169) by one of its stalwarts of the stallion roster, Compton Place (GB).

Another half-sibling to one of this season's group-winning graduates is found as lot 478 among the Croom House Stud draft. Twelve months ago Denis Brosnan's County Limerick-based farm sold a first-crop daughter of Zoffany (Ire) to Peter and Ross Doyle for £95,000. Named Illuminate (Ire) she became one of the earliest winners for her young sire when scoring at Salisbury on May 3 and has subsequently annexed two group races, taking the G3 Albany S. at Royal Ascot followed by the G2 Duchess of Cambridge S. at Newmarket. Her yearling half-sister is another to represent a freshman sire, being a daughter of the Irish National Stud's Dragon Pulse (Ire).

DBS' Managing Director Henry Beeby will be leading the team of auctioneers over three days of trade (including Thursday's 130-lot Silver Sale) and is hopeful of another successful stint for the company's flagship sale.

“The first person I bumped into doing the rounds this morning was an international buyer who came to this sale for the first time last year,” Beeby said. “He told me he thought our catalogue had taken another step up and that's pleasing to hear as we feel we've taken a big step forward on paper and, now I'm going around the grounds looking at the horses I thinking they are matching up physically, too.”

Beeby added: “We've had good feedback from the many people who were here yesterday [Sunday] and there are plenty of people here again today. We think it's a sale that punches above its weight and last year's graduates have done really well which of course helps, so we're very hopeful of another good sale.”

The consignors who are likely to be wearing the biggest smiles this week regardless of the sales results are Aisling Kinane and Mark Gittins of Ireland's Castlefarm Stud, who sell two yearlings at DBS and, more importantly, can now call themselves Group 1-winning breeders courtesy of their star graduate, the Prix Morny winner and Europe's top-rated 2-year-old, Shalaa (Ire) (Invincible Spirit {Ire}).

“I'm still not sure Sunday's result has really sunk in yet, we're still in shock,” said Gittins. “We were at a friend's wedding in Ascot on Saturday then had to get up to Doncaster for the yearlings, so we couldn't go over to Deauville to watch Shalaa, but we're over the moon.

“When you hear Frankie Dettori saying he's the best 2-year-old he's ever sat on, it's just unreal. I don't think we could ever have believed we'd breed a horse like him.”

The Castlefarm draft offers a colt bred on similar lines to Shalaa in lot 130. The first foal of Alkhawarah (Intidab), who is a half-sister to Shalaa's dam Ghurra (War Chant), is by freshman sire Born to Sea, the Invincible Spirit half-brother to none other than Galileo (Ire) and Sea the Stars (Ire).

“He's been going down very well,” Gittins added. “Both our yearlings are by first-season sires and they tend to be popular with buyers. We're very pleased with them both.”

The second member of the draft is a filly by Harbour Watch (lot 405) out of a sister to GII Honeymoon Breeders' Cup H. winner and GI Del Mar Oaks runner-up Three Degrees (Ire) (Singspiel {Ire}).

Another operation walking on air after last weekend's racing is Blue Diamond Stud, which bred Saturday's G2 Gimcrack S. winner Ajaya (GB) (Invincible Spirit {Ire}), who races in the colours of the stud's owners Saleh Al Homaizi and Imad Al Sagar. The pair also bred the third horse home in the race, Raucous (GB) (Dream Ahead), and sold him for 100,000gns to Highclere Thoroughbred Racing at last year's October Sale at Tattersalls.

Al Homaizi was inspecting yearlings at Doncaster on Monday with his racing and bloodstock manager Tony Nerses and is also offering a clutch of first-crop yearlings by their freshman stallion, Sayif (Ire), who stands at Llety Farms.

“Overall we're very pleased with the quality of Sayif's progeny,” said Nerses. “Saleh Al Homaizi and Imad Al Sagar supported him heavily in his first year at stud and spent over £1 million buying mares specially to go to him. He's produced some good-looking stock, but of course he's a good-looking horse himself. We'll be selling some and keeping some to race ourselves.”

Reflecting on Saturday's good result for the fledgling breeding operation, Nerses continued: “Winning the Gimcrack was almost a better feeling than winning the Derby [with Authorized] because Ajaya is homebred. It was a very proud moment for Blue Diamond Stud and I hope there will be exciting times ahead.”