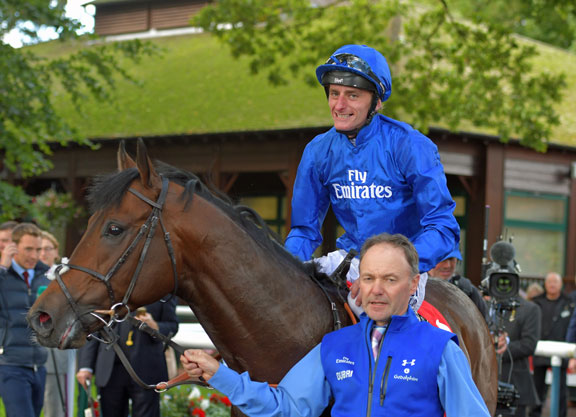 Fresh from plundering Newmarket's G1 July Cup in his latest start July 15, Godolphin's champion sprinter-elect Harry Angel (Ire) (Dark Angel {Ire}) advanced his credentials as Europe's leading speedster–and allayed all concerns about his abilty to cope on heavy ground–with a dominant performance in Saturday's G1 32Red Sprint Cup at Haydock. Sharply away to race on the front end of a stellar field from the outset of this straight dash, the crowd's 2-1 selection was threatened soon after passing the two pole, but put the contest to bed in a matter of strides when quickening clear approaching the final furlong and kept on strongly for continued rousting in the closing stages to win by daylight. At the line, he held a four-length advantage over Tasleet (GB) (Showcasing {GB}) with The Tin Man (GB) (Equiano {Fr}) 1 1/2 lengths further adrift in third. “I believe that a proper champion should be able to go on any ground, but he's so fast I was concerned about the [heavy] going,” admitted rider Adam Kirby. “It's a great team effort, fair play to [trainer] Clive Cox for taking the decision to run him and it's paid off really well. He's a machine, he's got speed to burn and I knew he'd won as soon as he picked up. He's very good and is just getting better.”

First or second in each of his seven starts to date, Harry Angel's stakes resume also includes wins in last year's G2 Mill Reef S. and this term's G2 Sandy Lane S., over this course and distance, and runner-up finishes in the May 3 G3 Pavilion S. and June 23 G1 Commonwealth Cup. Reflecting on a late decision to run, which was in doubt until the witching hour, trainer Clive Cox explained, “It was a case of deja vu as we had the same decision to make with Lethal Force a few years ago and he hated the ground. Harry Angel is so good on fast ground there had to be a chance he wouldn't go on it, but he's proved he goes on any ground now. It's difficult to change gear on ground like that and to win by four lengths against soft-ground horses was super. It's a huge relief after walking the course, that ground is as bad as it gets and thank goodness we made the right decision. He's maturing all the time and we can now head to Ascot [for the Oct. 21 G1 British Champions Sprint] without worrying what the ground does. He's a champion on fast ground and a proven champion on easier ground now and I hope he stays in training next year.”

The front three, at least, are set fair to cross swords once more with Tasleet and The Tin Man both slated for starts in Ascot's G1 British Champions Sprint, according to their trainers. “Tasleet ran a very good race, but we're going to have to come up with a way of beating Clive [Cox]'s horse,” said William Haggas. “We can't just let him have an easy lead and put the race to bed. I think it's now clear we're better on soft ground so we'll head to Ascot next I think.” James Fanshawe, analysing a third-place finish for The Tin Man after running second last year, added, “He ran very well again, but the [heavy] ground has blunted his speed. Ever since [winning the G1 Diamond Jubilee S. at] Royal Ascot the main aim has been to head back to Ascot [for the G1 British Champions Sprint] on Champions Day, as he runs so well there.”