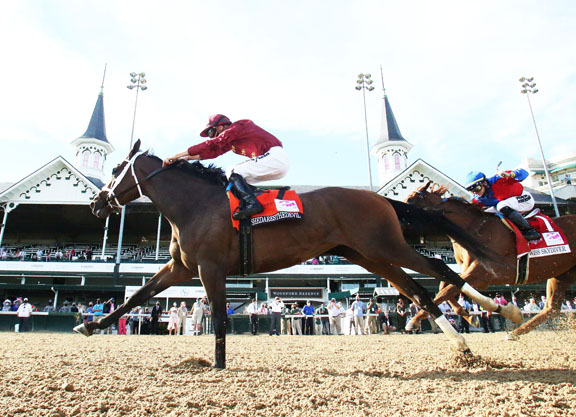 Daredevil is the only first-crop stallion to sire an individual winner of the GI Kentucky Oaks and GI Preakness S.  in the same year. | Coady

A wise man changes his mind, but a fool never will.

Such is the association between the commercial market and Daredevil (More Than Ready– Chasethewildwind, by Forestry). Luckily for the third-crop sire, the market was quick to change its opinion and Lane's End jumped on the opportunity to bring him back.

After Daredevil failed to attract mares to fill his fourth book in 2019, WinStar Farm accepted an offer from the Jockey Club of Turkey and the son of More Than Ready boarded a flight abroad for last year's breeding season.

But 11 days before the announcement was made of the stallion's relocation, a filly by the name of Swiss Skydiver broke her maiden by 5 ½ lengths at Churchill Downs for Kenny McPeek.

This filly alone arguably could have changed the market's opinion of her sire., but then she ran second to another daughter of Daredevil in the GI Kentucky Oaks.

Shortly after Swiss Skydiver's gutsy duel with eventual Horse of the Year Authentic (Into Mischief) to win the GI Preakness S., becoming just the sixth filly in history to do so, it was announced that Daredevil would return to his home country, relocating to Lane's End Farm.

“Daredevil is just an incredible story,” said Lane's End's Bill Farish. “He got off to such a phenomenal start with his 3-year-olds, not having had that much 2-year-old form before, but to finish first and second in the Kentucky Oaks and then go on to win the Preakness with Swiss Skydiver, it's amazing what he's done. So when we had the opportunity to bring him back to the United States, we were very excited about it.”

Farish said demand was high when their negotiations were made with the Turkish Jockey Club.

“I wish we were the only ones looking at him,” he said. “We were just trying, as everybody else was, to find a deal that made the most sense to them. At the end of the day, they wanted to keep the whole horse. So that gave us an opportunity to get in there and make our pitch. Ultimately they chose us, so we feel very lucky.”

Daredevil will stand at Lane's End as property of the Jockey Club of Turkey. Farish said this point has brought up many questions from breeders.

“It kind of surprised us when people were assuming he might go back and forth,” he said. “But given that we're both in the same hemisphere, that's not really possible. It's fully their intention to leave him here. [Breeders' concern] really was something that caught us off guard because their decision was to send him back to where he is having the most success and certainly [where he can] generate the most revenue for the Jockey Club.”

Daredevil covered 97 mares while in Turkey, logging the largest book of any stallion in the country. He had also covered 397 mares in the four years prior to his first relocation.

“I think one thing that's often overlook about Daredevil is that he did have three good-sized books before he left,” Farish noted. “So we really look for him not to have much of a fall off. He only missed one breeding season here in North America so I don't think that's going to slow him down. I think he's got a likely chance to carry right on through.”

Despite his slower start with his 2-year-olds as a first-crop sire, the stallion's race record indicates he could have every chance to pass on his precocity.

A $260,000 yearling purchase, the Todd Pletcher pupil broke his maiden on debut by over six lengths and later caught a speedy victory in the GI Champagne S. over eventual millionaire Upstart (Flatter), scoring a 107 Beyer Speed Figure.

The Grade I winner is also a half-brother to millionaire Albertus Maximus (Albert the Great), winner of the 2009 GI Donn H. His Grade I-winning second dam, Race the Wild Wind (Sunny's Halo), is also a European Group 1 producer. Grade I winners Dayoutoftheoffice (Into Mischief) and Here Comes Ben (Street Cry {Ire}) both appear under the second dam.

“Physically, Daredevil looks a lot like More Than Ready,” said Farish. “He's strong-made and good-boned. I wasn't surprised at all when I saw him; he looked a lot like I had hoped he would. I think hopefully he'll pass that on because he's a great-looking horse.”

When asked on the trends Farish anticipates from Daredevil's first crops upon his return, he replied, “I think we're going to see a lot of the same attributes that More Than Ready has. They can run on the dirt and turf and we'll see that same type of a very strong-made, good-boned horse. That's what we've seen so far.”

Daredevil's star fillies are both on track to return for a 4-year-old campaign. Shedaresthedevil is in training at Oaklawn and trainer Brad Cox reported earlier this month that the Oaks heroine may return in the GII Azeri S. on Mar. 13. Last year's champion 3-year-old filly Swiss Skydiver recorded her first two works of 2021 at Gulfstream in February.

“Swiss Skydiver is one of those dream fillies with the way she strung together one phenomenal performance after another,” said Farish. “It would be one thing if she were the only horse that he produced, but then he had another filly that won the Oaks and then additional stakes performers as well. So he's really stamping himself as a super sire and so far, the breeders have really responded.”

Aside from his Grade I-winning pair, several other youngsters made headlines for their sire after his departure to Turkey.

Jewel of Arabia ran third in her juvenile debut in 2019 in the Stillwater S. and last year, broke her maiden by seven lengths for Christophe Clemente before taking an allowance at Saratoga.

Daredevil wrapped up 2020 in the fourth slot for second-crop sires by earnings with only 84 starters compared to the over 130 for each of the top three finishers. Both he and leading first-crop sire American Pharoah led their class with two Grade I winners each.

The new Lane's End stallion will stand his first year at stud for $25,000.

“Demand has been really good from breeders,” Farish said. “He's a good-looking horse. Everybody that comes to see him is just positive all the way around and generally want to breed to him. He's a very reasonably-priced horse, for a horse that had two Classic winners in 2020, so we're looking forward to more great things from him.”