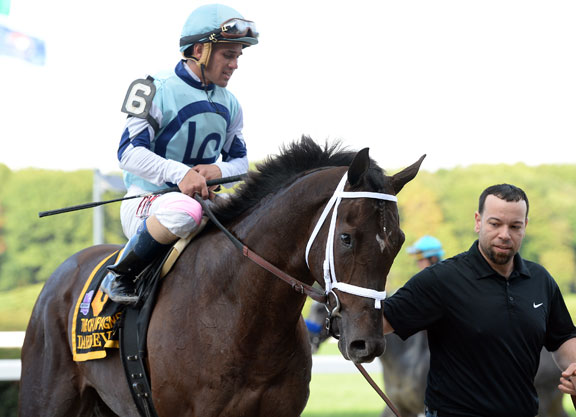 Daredevil (More Than Ready–Chasethewildwind, by Forty Niner), who posted a spectacular victory in the 2014 GI Champagne S. in just his second career appearance, has been retired from racing and will enter stud alongside his successful sire at WinStar Farm for the 2016 breeding season. A stud fee will be announced at a later date.

Bred in Kentucky by Marianne and Brandon Chase, the chestnut was a $260,000 purchase out of the 2013 Keeneland September sale by Let’s Go Stable and turned in a highly impressive career debut, romping by 6 1/4 lengths in the Belmont slop, good for a 96 Beyer Speed Figure. It was the fastest maiden in New York in 2014. His victory in the Champagne came at the expense of Upstart (Flatter), who went on to frank the form of that race with his win in the GII Holy Bull S. this past winter. The 107 Beyer awarded to Daredevil for the Champagne, a race won by the likes of Buckpasser, Seattle Slew, Forty Niner and Maria’s Mon, among others, was the fastest in the race in over 20 years.

Last October, WinStar Farm purchased a 50% interest in Daredevil, and this past February, it was announced that the China Horse Club had also acquired a minority interest in the colt. That burgeoning entity raced recently named Australian Horse of the Year Dissident (Aus) (Sebring {Aus}), a paternal grandson of More Than Ready.

“Daredevil is the fastest 2-year-old ever by More Than Ready, which is a big statement when you look at how successful of a juvenile sire More Than Ready has been,” said Elliott Walden, President & CEO at WinStar. “Now, More Than Ready is emerging as an important sire of sires around the world, and it’s happening through his best juvenile sons like Sebring, who’s the sire Dissident.

He added, “Daredevil was an extremely fast winner of one of the most important 2-year-old races around, the Grade 1 Champagne, which has been won in recent years by horses like Uncle Mo, Union Rags, and Scat Daddy. Daredevil earned a 107 Beyer in his Champagne, which is the single fastest Beyer earned by a 2-year-old colt since Uncle Mo and The Factor. I also love the fact that there are five Grade 1 winners under Daredevil’s first two dams. We believe he possesses everything to stand alongside his sire More Than Ready as an exciting son that has a big shot at carrying on that sire line.”

Daredevil will be available for inspection at WinStar during the November breeding stock sales in Lexington.