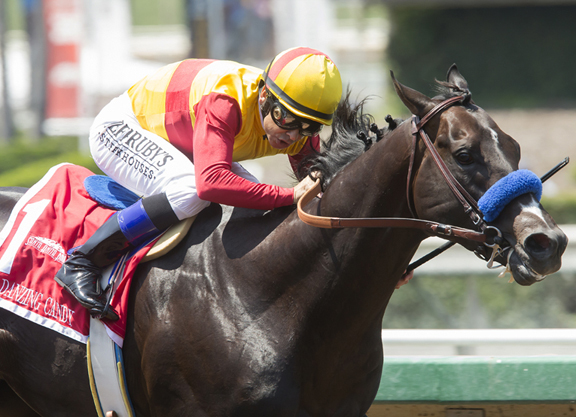 Talented 'TDN Rising Star' Danzing Candy (Twirling Candy–Talkin and Singing, by Songandaprayer) was found to be injured after galloping Friday and has been retired from racing. The speedster would've been short odds while seeking his fourth-straight victory in Saturday's GII Pat O'Brien S. at Del Mar. “I'm just so upset that horse got hurt today,” trainer Baffert told the TDN Friday afternoon. “He had a routine gallop this morning, came back to the barn fine and about a half hour later he was noticeably lame. We X-rayed the ankle and there was a line in the sesamoid, so that's it. He is out of the race [Saturday] and is officially retired. It's just devastating news because the horse was doing so well. I was really looking forward to this horse's race.” Campaigned by Ted Aroney's Halo Farms and Jim and Diane Bashor, Danzing Candy was a decisive winner of last year's GII San Felipe S. while under the care of Cliff Sise, Jr. Transferred to Baffert after competing in the GI Kentucky Derby, he was second in Santa Anita's GIII Affirmed S. that July, and resurfaced this March to be third in the Joe Hernandez S. down the hill May 5. The dark bay turned a major corner when besting GII San Diego H. romper Accelerate (Lookin At Lucky) in an Arcadia optional claimer May 5, and aired in the GIII Lone Star Park H. May 28 before defeating subsequent GI Bing Crosby S. winner Ransom the Moon (Malibu Moon) in the GII San Carlos S. July 1. Bred in Kentucky by Halo Farms and out of a half-sister to MGISW Better Talk Now (Talkin Man), Danzing Candy retires with earnings of $700,930 from an overall record of 11-6-1-1.