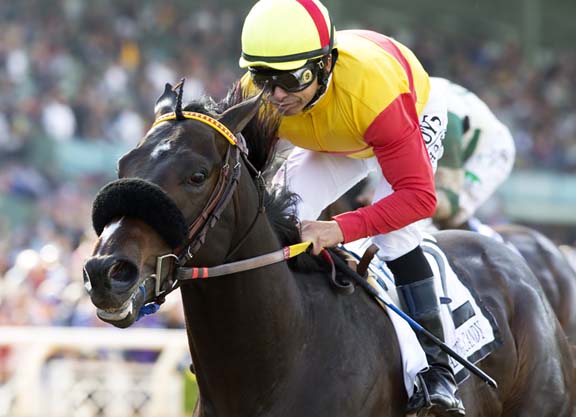 'TDN Rising Star' Danzing Candy (Twirling Candy), wire-to-wire winner of the GII San Felipe S. in his most recent trip to the post Mar. 12, tuned up for the Apr. 9 GI Santa Anita Derby Saturday morning, working five furlongs in a bullet :58.60. It was the fastest of 54 works at the distance, for which the average time was 1:01.47.

“I didn't want to go quite that fast,” admitted trainer Cliff Sise Jr. “I wanted to go in like a minute and change, but he got some air in him today.”
Working in the company of the Richard Baltas-trained Far Out Kailee (Summer Bird), Danzing Candy, who races as a homebred for Halo Farms, was timed in :22.80 for the opening quarter-mile and :46.40 for the half before galloping out in 1:12 flat.

Also working for the Santa Anita Derby were Exaggerator (Curlin) and Smokey Image (Southern Image), third and fifth in the San Felipe, respectively. Exaggerator went in fractions of :24 flat for a quarter, three-eighths in :36 and a half in :48.60. He finished five furlongs in 1:00.40 beneath Kent Desormeaux and galloped out in 1:13.80.

“It was a normal work and he did it easily,” trainer Keith Desormeaux said. “No complaints.”

Smokey Image, who lost his unbeaten record in the San Felipe, went five furlongs in :59.60.