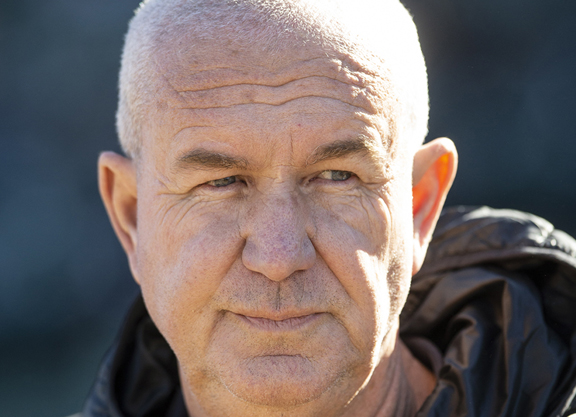 Back in 2006, Dan Ward was still oiling the gears of a near decade-long sabbatical from horse racing when a gun was held to his head.

He was working as a bartender at the Stick & Stein, a busy sports bar near LAX airport frequented by travelers and athletes and Hollywood Park track workers. As he was locking up one night, a gun-toting robber was waiting outside, figuring to try his luck. The Fates had other plans, and the assailant left with little more than the tips in Ward's pocket.

“The safe was closed and I couldn't get it open,” he said, “so they just took what money I had on me.”

But the incident had the effect of hastening Ward's return to the track.

“Once you have that happen, you don't have the same enthusiasm,” Ward said, of his bartending gig.

In 2007, he accepted a short-term position for Peter Miller, after which Hall of Famer Jerry Hollendorfer tapped him to oversee his Santa Anita stable. Ward accepted, and the die was cast on a working relationship that has proven one of the most prolific on the Southern California circuit.

Now, however, there's another gun leveled Ward's way–a metaphorical gun, sure, but one no less able to send those cortisol levels spiking.

“I've got all eyes on me right now if anything happens,” Ward admitted, of the scrutiny he's currently under, having taken out, at the saintly age of 60, his trainer's license to run a barn that would–in an alternate universe–operate under the Hollendorfer name.

The background to this situation has played out as public spectacle. In June, American Currency became the fourth Hollendorfer-trained horse fatally injured during the six-month Santa Anita meet. Citing that and another two Hollendorfer-trained horses catastrophically injured at Golden Gate Fields, The Stronach Group (TSG) ordered the trainer to remove his horses from both tracks. Following TSG's lead, the New York Racing Association (NYRA) and Del Mar subsequently barred Hollendorfer from running horses at their facilities under his name, but they opened the door to his assistants, with Don Chatlos now training owner Larry Best's horses in New York.

Muddying the waters is the fact that there has been no formal, regulatory ruling in California or New York against Hollendorfer. Neither TSG nor NYRA directly answered questions as to what the statistical basis was for their decisions, and what information points they factored in, though court documents filed by Del Mar this week includes the following: “despite his lengthy and successful career during the past six months, Hollendorfer has accounted for 15% of the horses that have lost their lives in racing and training at two California tracks.”

The documents are in response to the complaint filed in the Superior Court of San Diego by Hollendorfer and the California Thoroughbred Trainers against the Del Mar Turf Club, seeking to permit Hollendorfer to resume training at the current Del Mar meet. A ruling on the case is expected this Friday.

While Hollendorfer's career is undergoing such public anatomization, Ward is keen for the trainer's broader record to be evaluated, rather than a narrow slice of it.

“If you want to go back the last 10 years and look at all the starts and injuries, we've got a pretty good record,” said Ward, before detailing the program he oversaw at Santa Anita. “We filled out every work slip. We don't train on [phenylbutazone] bute. We don't shockwave. We don't inject joints [with corticosteroids]. We jog every horse before they go to the track and cancel any works if they're unsound,” he said.

(Indeed, a review of the California Horse Racing Board's “veterinary list” database indicates that the last time a Hollendorfer trainee at Santa Anita received a shockwave treatment was 2018. As for the use of bute and corticosteroid injections, CHRB public information officer Mike Marten wrote an email that they are listed in “Vet Confidentials” which are not public documents).

Right now at Del Mar, Ward runs a stable of about 16 horses, with another 20 at Los Alamitos. They're down as many as 20 horses overall, said Ward. Some were turned out. Some owners left through frustration at horses being scratched, he said–a result of the new five-person review panel filtering entries. But some owners, Ward added, fled the nest because of ongoing uncertainty surrounding Hollendorfer.

“We lost a lot of business,” Ward said, explaining that he's laid off more than a dozen employees. “What I do know is how much it hurts when people came to get their last checks who had been here for like 10, 12, 15 years, and they were crying.”

Some have found employment elsewhere, he said. “But they want to come back here because it's like family,” Ward explained. “They're good people. Their cousins work here, and then their cousins work here–they don't leave. That's the hardest thing, looking them in the eye and you don't have an answer.”

Loss, of course, can have an equalizing effect. While horse and staff numbers are down, Ward has gained an altered appreciation of Hollendorfer, thanks to his handling of events. “He's under all this stress, people taking away horses and having to lay-off employees, that hurts,” he said, adding that he wished more focus was applied to other aspects of the trainer's record, including his racehorse aftercare program in Washington State, providing equine therapy to veterans suffering PTSD.

“There's a cat at Los Alamitos, he spent $10,000 to save it. You're telling me the same guy wanted to hurt the horses?” Ward said.

Training, so the adage goes, is a young person's game–at 60, Ward isn't your typical wet-behind-the-ears addition to the ranks. He always wanted to train, he said. “Everybody does.” Though these are hardly the circumstances in which he wanted it to happen, happen it did, and after opening weekend, Ward boasts a 20% strike rate.

His parents, who live locally, were on hand for his inaugural victory.

“It's worked out good that they've got to come see my name in the program, come into the winner's circle–really special,” he said, before alluding to their ages, 86 and 87. “I don't know how many more times I'll be able to come down and have them here.”

Though Ward wasn't born into the sport–his father worked for American Express, his mother in accounting–horse racing hooked him from an early age.

“My first race, Majestic Prince in '69,” he said, of the golden chestnut's Santa Anita Derby romp.

When it came time to join the workforce, Ward had eyes on the Bobby Frankel academy, “but he didn't have any availability,” Ward said. So, the 18-year-old instead joined the barn of Joe Manzi, trainer of champion 2-year-old colt Roving Boy. There he stayed until a school friend secured him a spot with choice numero uno.

“I went over there, but it was much more difficult,” he said, of the five-time Eclipse Award winning outstanding trainer. “You had to prove yourself. If you do something that he sees to gain his trust, then you're in. When I started, they didn't let me groom four horses–I had one and I walked horses. Then I had two. Then I had three. Then I had four.”

Ward took out his assistant trainer's license in 1980 and started travelling with the stable's best and brightest. This was the era of early Juddmonte star Exbourne, grizzled handicapper Marquetry, and G1 Japan Cup winner Pay the Butler. There are elements of the Frankel philosophy that have stuck: “I liked that he worked his way from the race, backwards,” Ward said. “He would go from stall to stall, evaluate every horse, figure out what the goal is.”

Another Frankel axiom: if a horse runs lights out, don't run it back quick. Just look at Ghostzapper, the future GI Breeders' Cup Classic winner.

“He ran a ridiculous number first time out, and he was really thinking about the [Derby preps]. He ran him back and he was fourth, and he was mad at himself,” said Ward. Ghostzapper was subsequently turned out, missed the classics, but came back to win the GI Vosburgh S. later that year. “Things like that, you can't learn that from anyone else–and you can't forget that.”

Ward parted ways with Frankel in 1998, burned out, he said, from the relentless grind. Then came the near decade-long sabbatical into bartending. In an ode to posterity, when Ward did return to the fold, one of the first big horses Ward was involved with at the Hollendorfer barn was the former Frankel trainee, Heatseeker (Ire), who ended up winning the 2008 GI Santa Anita H.

Which leads us back to the present, and the current maelstrom in which Ward finds himself very much in the eye of.

“I think the rules that they've put in are all good,” he said, of the safety protocols and medication restrictions put in place both at Santa Anita and across the state. “You're thinking about the things you never used to think about, like the public's perception. Times change.”

The times they are a changin' indeed, for it's not just in California where issues of horse welfare have taken the wheel–industry-wide headwinds are fundamentally reshaping long-established practices of horsemanship and training.

“We're just not going to see horses dropping from $50,000 to $4,000 to run in Mountaineer. That's a good thing,” Ward said. “Those types of horses just aren't going to be allowed to run anymore. You've got to get rid of them, turn them out, which is okay.”

What about the future–where's the game headed? Ward sees two issues integral to reducing catastrophic breakdowns. One is a switch to synthetic surfaces, and the other is simply less racing.

“Even when they first put in the Hollywood fall meet, you still had six, seven weeks' break from racing,” Ward said, of a period in California's history where the racing calendar was less intense. “Horses got the break they needed.”

As for his own future, Ward is understandably circumspect with so many loose threads dangling.

Some much-needed clarity could come this Friday. But then there's the issue of whether TSG will, later this year, offer Hollendorfer stalls at their California facilities–Ward anticipates that Belinda Stronach and Hollendorfer will meet in person. “They've got to,” he said.

If the judge rules against Hollendorfer this Friday, Ward's name will remain in the program book, at least for the time being, though he's keen to emphasize how the every-day running of the barn remains unchanged.

“Nothing's different,” he said. “It's easy to make the list, because I know what [Hollendorfer] wants,” Ward said.

And yes, though he has only 16 horses at Del Mar, it's a rather sweet 16 that includes two-time Grade I winner, Vasilika (Skipshot), who he describes as “the best mare in America right now.” There's another regal eagle in the barn, a half-sister to Songbird by American Pharoah named America's Surprise. “If she wins a Grade I she's worth $10 million. There's your goal,” he said, before planting his feet back on the terra firma. “We'll just try to have a quiet meet, win some races, keep our owners happy, and try to build on it.”