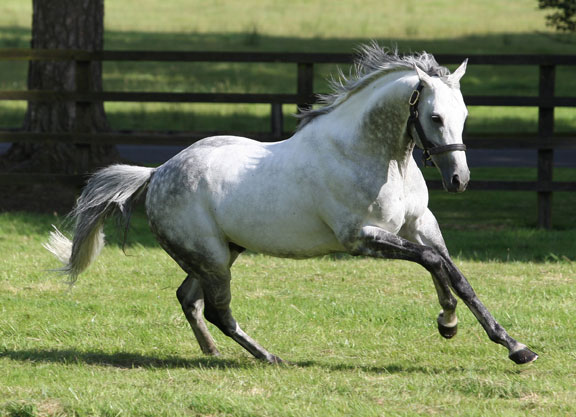 The Aga Khan's Dalakhani (Ire) (Darshaan {GB}), the Champion Three-Year-Old and Horse of the Year in 2003, died on Friday in retirement at Haras d'Ouilly at the age of 21.

Expertly trained by Alain de Royer Dupre, the half-brother to Daylami (Ire) (Doyoun {GB}) sailed through his three starts at two, breaking his maiden at Deauville in August before graduating swiftly to group company and wins in the G3 Prix des Chenes and G1 Criterium International. But it was his 3-year-old season which would set him apart, and in nine career starts only one horse ever got the better of him: the fellow Aga Khan homebred Alamshar (Ire), in the Irish Derby on Dalakhani's sole start outside France.

Prior to that he had started his season in the G2 Prix Greffulhe and went on to win the now-defunct G1 Prix Lupin at Longchamp in May before his dazzling turn of foot was seen to full effect in the Prix du Jockey Club.

Sent off favourite at the Curragh on his next start in the Irish Derby, with Alamshar sporting the old brown-and-green hooped colours of the Aga Khan, Dalakhani raced in isolation in the early stages, stranded between two Ballydoyle pacemakers setting a fierce tempo up front as the rest of the field remained adrift. As the front-runners weakened, Dalakhani cruised to the lead with Alamshar travelling ominously well at his shoulder. The two Aga Khan colts soon pulled well clear of the field to engage in an epic battle for the spoils, with Dalakhani half a length down at the post.

Freshened up through the summer with the Arc in mind, the grey colt returned triumphant, beating Doyen (GB) in the G2 Prix Niel, before becoming his breeder's third of four winners of the Prix de l'Arc de Triomphe, with High Chaparral (Ire) back in third.

Following this final race of his career, the Aga Khan said of Dalakhani, “He's outstanding on the basis of what we've seen as a 2-year-old, 3-year-old, over all distances and on all going. It's very difficult to make comparisons, but this horse has a concentration of unusual talents, and that's what gives him the ability to accelerate when he needs to accelerate, to follow a pace when he needs to follow a pace, and to handle all goings.”

Dalakhani was out of the listed-winning Miswaki mare Daltawa (Ire), whose three sons to stand at stud include Dalghar (Ire) (Anabaa) along with the aforementioned top-class campaigner Daylami. One of the few remaining conduits of the Mill Reef line during his time at Gilltown Stud, Dalakhani's tenure there reaped 10 Group 1 winners, including his fellow Prix du Jockey Club victor Reliable Man (GB), who now stands at Germany's Gestut Rottgen, and the Irish Oaks winner Moonstone (Ire).  His son Conduit (Ire) was a top-class performer for Ballymacoll Stud, winning the St Leger before heading to Santa Anita to win the GI Breeders' Cup Turf, a race he claimed two years in succession. Dalakhani's most recent Group 1 winner was Defoe (Ire), who landed the Coronation Cup for his breeder Sheikh Mohammed Obaid Al Maktoum.

Dalakhani was retired from covering duties in 2016 and, in recent years, he has enjoyed a decent level of success as a broodmare sire, most notably through champion 2-year-old Pinatubo (Ire) (Shamardal). His Classic-winning daughter Moonstone is the dam of G3 Chester Vase winner and Derby runner-up US Army Ranger (Ire) (Galileo {Ire}), while last season's G2 Dante S. winner Thunderous (Ire) (Night of Thunder {Ire}) and seven-time Grade 1-winning hurdler Nichols Canyon (Ire) (Authorized {Ire}) are also out of Dalakhani mares.