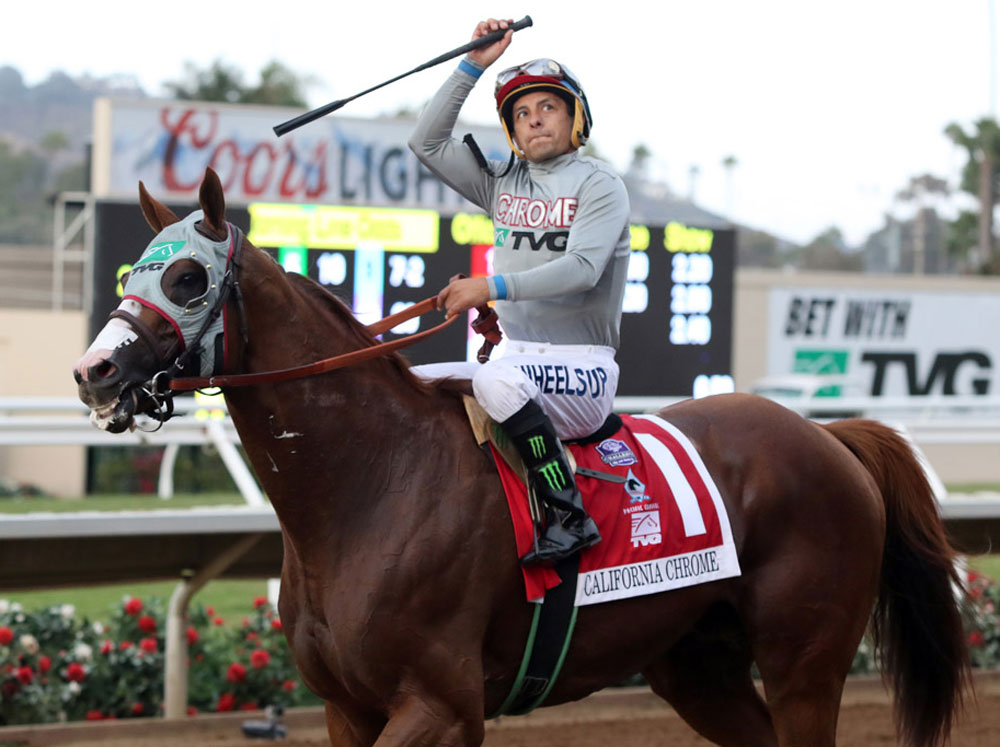 With 27 starts, 16 victories and $14,752,650 in lifetime earnings, the historic career of two-time Horse of the Year California Chrome (Lucky Pulpit) came to a close Saturday afternoon at Gulfstream.

Unfortunately, it did not end quite the way his connections had hoped. The GI Breeders’ Cup Classic runner-up’s career finale in the $12-million GI Pegasus World Cup was billed as a match race with Classic winner Arrogate (Unbridled’s Song), but that was only true for the opening half-mile. As his younger rival powered clear, California Chrome began to fade and wasn’t persevered with down the stretch, finishing a well-beaten ninth.

“He faded by the half-mile pole,” Chrome’s longtime rider Victor Espinoza said. “I was pretty much done by that point, but the whole race he never really got into the race. I sent him from there to get position but I didn’t want to get too wide, and I was perfect. I was just third and so nice and at the five-eighths pole I didn’t feel like I had that power. There wasn’t enough gas in there. He was empty.”

Espinoza continued, “I hope he’s OK. It looks like he’s OK. He might have bled or something, who knows what happened. The main thing is he came out of the race good, sound. He’s done a lot. Sometimes he’s going to throw in one of those bad races and one of those bad times was today.”

“It looks like he scrambled away from there and couldn’t get his footing,” said a visibly upset Art Sherman. “It looked like he wasn’t getting a hold of the racetrack, like maybe his feet were getting out from under him. I don’t know why, he worked good over it. I need to talk to Victor and go back to the barn to make sure he’s alright.”

The conditioner added, “It’s been an unbelievable journey with him, even in defeat. You have such a good run. Not every horse can keep the record up like he has.”

Winner of the 2014 GI Kentucky Derby, GI Preakness S. and GI Santa Anita Derby, California Chrome earned his first Horse of the Year title that term as well the Eclipse for top sophomore male. Racing just twice in 2015, including a runner-up effort in the G1 Dubai World Cup, the California-bred returned to Meydan with a vengeance this year, scoring an ultra-impressive victory in the Mar. 26 Dubai World Cup to become North America’s richest Thoroughbred. Given a brief freshening, he captured the GII San Diego H. July 23 and romped by five lengths over Dortmund (Big Brown) and four-time Eclipse winner Beholder (Henny Hughes) in the GI Pacific Classic Aug. 20. Following suit with a win in the GI Awesome Again S. Oct. 1 prior to his second in the Breeders’ Cup Classic, the 2016 champion older male and Horse of the Year prepped for the Pegasus with a facile victory in the Winter Challenge S. at his Los Alamitos home base Dec. 17.

California Chrome, who retires with a record of 27-16-4-1, will leave Gulfstream Sunday for Kentucky, where he will begin his stud career at Taylor Made Farm.