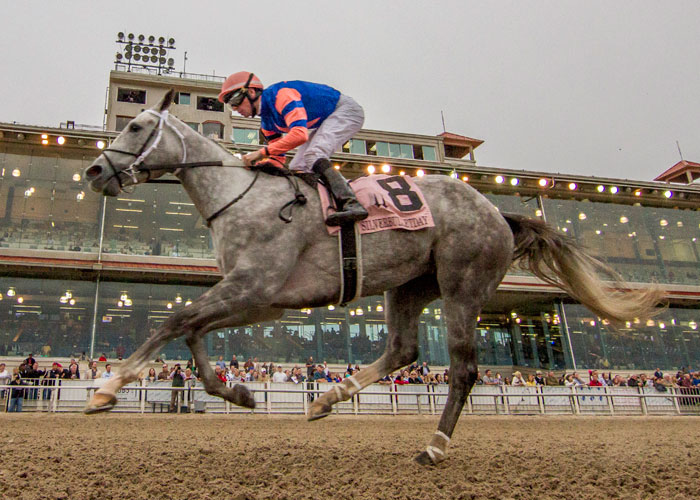 Sent off the prohibitive chalk on the heels of a productive and promising 2-year-old season, Stageplay got her sophomore season off on the right hoof with a solid success in the Silverbulletday S. at the Fair Grounds. Outposted in the field of seven, the Mike Rutherford homebred jumped alertly, but was relegated to a three-wide and stalking trip from third as Midnight On Oconee and Lovable Lyss (Big Brown) showed better speed underneath her. With positions unchanged through the middle stages of the race, Florent Geroux sent Stageplay to turn up the pressure on Midnight On Oconee, as Lovable Lyss began to retreat. The gray hit the front going well about three-sixteenths of a mile from the finish and looked to tire a touch inside the final 100 yards, but was always holding the game runner-up down to the winning post. Jet Black Magic saved ground throughout and rallied late into a non-threatening third. A half-sister to Mylute (Midnight Lute), who more than held his own over this track two years ago, Stageplay defeated future ‘TDN Rising Star’ Carina Mia (Malibu Moon) by three lengths on Keeneland debut Oct. 10, then made it two on the bounce with a 1 1/2-length success as the 3-5 favorite in the Rags to Riches S. going Churchill’s one-turn mile Nov. 1. The 8-5 pick to remain unbeaten in the GII Golden Rod S. over a rain-affected Churchill strip Nov. 28, she bid for the lead outside of the front-running Carina Mia a furlong down, but could not match strides late and settled for second. Click for the Equibase.com chart or VIDEO, sponsored by Fasig-Tipton.