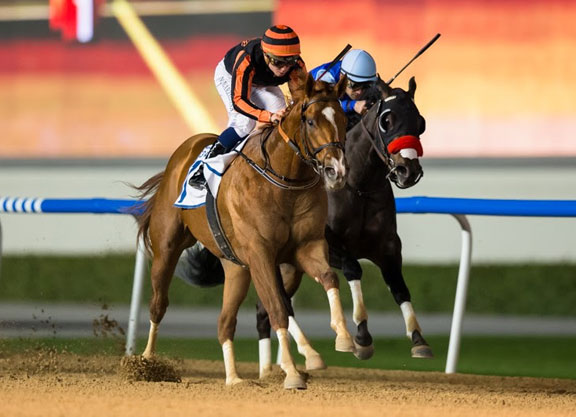 Gladiator King has proven a shrewd purchase by Sheikh Rashid bin Humaid Al Nuaimi, the 4-year-old son of Curlin now two-for-two in Dubai, having added victory in Thursday's G3 Al Shindagha Sprint to his score in the G3 Dubawi S. on opening night of the carnival on Jan. 2.

Gladiator King was previously trained by Jaime Mejia in the U.S., and he won a key U.S. 3-year-old sprinting contest, the GIII Hutcheson S., last winter before finishing a head second in the GIII Chick Lang S. on the Preakness undercard. Transferred to Satish Seemar, he defied odds of 10-1 to win the Dubawi first-up and is now firmly among the favourites for the G1 Dubai Golden Shaheen on Mar. 28.

Breaking from the rail on Thursday, Gladiator King was shifted out a few paths by Mickael Barzalona to track the pacesetting I Kirk (Swe) (Eishin Dunkirk) and Doug O'Neill's Truck Salesman (Can The Man), making his first start outside the U.S. I Kirk began to tire turning for home as Gladiator King began to pick it up, and although it looked for a few strides as if Truck Salesman may have gotten first run on him, Gladiator King ultimately wore down that rival to win by three-quarters of a length.

“We were very pleased with the way he did it today,” said Barzalona. “He has some natural speed. If he would be in front, it wouldn't be a problem for him. He's a lovely horse, he's easy to ride and hopefully there's more to come. I was a little scared of [fourth place finisher] Drafted, to be fair, but I feel my horse is still improving and going the right away.”