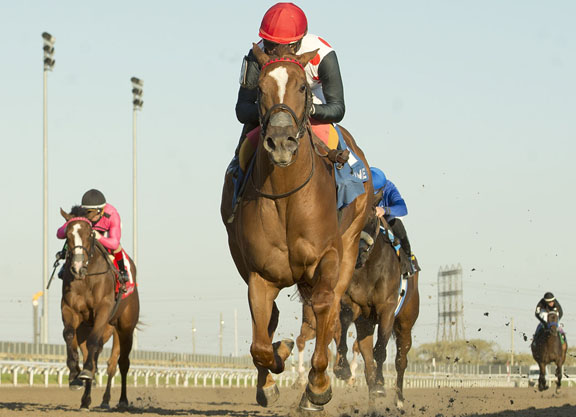 'TDN Rising Star' Souper Sensational (Curlin) made it two wins from as many trips to the races with a highly impressive victory in Saturday's Glorious Song S. at Woodbine.

Favored at 3-5 to add to a facile 2 1/4-length debut success in a salty local maiden Sept. 26, the $725,000 Fasig-Tipton Saratoga graduate was outfooted early, but mustered speed up the inside to lead prior to the entrance to the turn. Skipping along nicely into the final two furlongs despite some pressure to her outside, Souper Sensational pinched a winning break in upper stretch and was never in any danger. Javanica (Medaglia d'Oro) ran on well from last to complete the exacta ahead of the winner's longshot stablemate Right To Freedom (Constitution).

“I don't want to be smart, but she's one of the best so far I've got on as a two-year-old,” said winning jockey Patrick Husbands. “All this horse has got is 'green light.' You could do anything with her. She's just a 3-year-old in a 2-year-old body.”

The 70th black-type winner for her sire, Souper Sensational is out of an unraced half-sister to GISW Tiz Miz Sue (Tiznow), dam of this year's Japanese-based G3 UAE Oaks third Serein (Uncle Mo); and Bulletin (City Zip), winner of the inaugural Breeders' Cup Juvenile Turf Sprint. Kateri, who was purchased by Sallusto & Albina, agent for Newtown Anner Stud, for $167,000 in foal to Paynter at FTKFEB in 2016, is the dam of a yearling colt by Maclean's Music and a weanling full-sister to Souper Sensational. She was most recently covered by American Pharoah. Click for the Equibase.com chart or VIDEO, sponsored by Fasig-Tipton.