Curlin Filly On ‘Point’ for Weaver 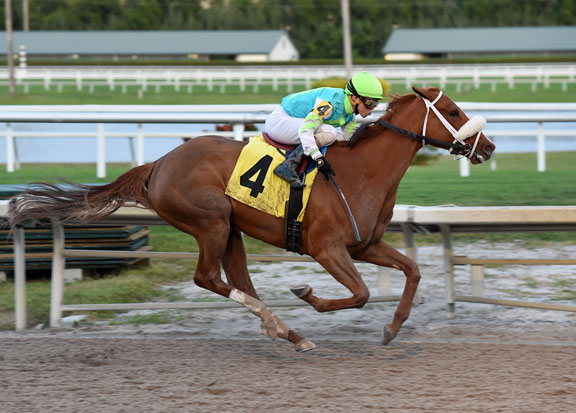 When Sunday’s 11th race at Gulfstream came off the turf after overnight rains, it lost a lot of its luster, as the field of lightly raced 2-year-old fillies scratched down significantly, leaving little proven dirt form. But the group was not devoid of talent, as one promising young filly showed when romping to a professional score at first asking.

Point of Honor (Curlin) was a popular item when put through the ring as hip 123 at the 2017 Keeneland September sale. After an intense round of bidding, the Siena Farms-bred chestnut topped out at $825,000. That wasn’t enough to reach her reserve, though the sum would’ve represented the second-highest lot for progeny of her sire at the marquee yearling auction had she sold.

Instead, she was privately purchased by Donato Lanni of Hill ‘n’ Dale Farms and showed up Sunday in Hallandale in the relatively unfamiliar blue, lime green and white silks of Stetson Racing for trainer George Weaver. Comfortably settling in a stalking position as the narrow 19-10 race favorite, Point of Honor pounced on the pacesetters nearing the turn for home, switched leads without asking and drew off strongly to a sharp, six-length tally going 1 1/16 miles, always a demanding distance for a first-time starter (video).

“We had kind of had some mixed signals; she had some good works on the dirt and the turf and she had come to the point where she was plenty fit enough,” Weaver said. “I chose to enter her in a turf race just to give her a run and see what she would do, but we did expect her to perform well and when they took it off the turf, I knew that she could handle the dirt very well. I definitely thought she had a decent chance to win and we were glad that not only did she win, but she did it pretty stylishly.”

Weaver may not have exactly nailed down which surface his filly was cut out for prior to her debut, but the former assistant to Todd Pletcher purposefully looked for a two-turn race to open her account with, which made sense given her morning activity.

“We liked her going in there, but she’s always been a filly that’s been workmanlike in her breezes,” he said. “She’s not the type of filly that’s going to break stopwatches and go in :46, but she always has acted like she’s had some class and quality to her. I didn’t want her to have to be chased after early in the race. I wanted her to have a chance to break and get in the bridle and not have to be hustling for the first quarter-mile, half-mile to keep up, because she’s just not a sprinter. It worked out very well and came together as I thought it would, so we’re very happy.”

As for Point of Honor’s ownership, Stetson Racing is the brainchild of John Connelly, who made brief waves in the mid and late-2000s with trainer Bob Baffert under the name Stetson Land and Cattle, a California-based ranching company. The outfit’s crowning achievement came when capturing the 2007 GI Oak Leaf S. with Cry and Catch Me (Street Cry {Ire}), a Baffert trainee from the first crop of her Darley sire which also happened to feature a champion that year in GI Breeders’ Cup Juvenile hero and eventual GI Kentucky Derby winner Street Sense.

The dark bay was shelved for eight-plus months following her top-level tally and failed to recreate her peak form as a sophomore, but Connelly and Lanni took advantage of a significant update and realized a hefty profit when the former $150,000 Keeneland September buy and half-sister to 2012’s Cartier-winning Champion 2-Year-Old Filly Certify (Elusive Quality) hammered for $3.5 million to Live Oak Plantation at that term’s Fasig-Tipton November Sale. That, however, effectively marked the end of Stetson Land and Cattle’s involvement in racing, as it failed to win a race from just three starters afterward.

“[Connelly] got out of the business and now he’s back in a little bit and I buy him horses,” Lanni said. “He’s in California and spreads his horses around. He’s a really good guy, real quiet. Hopefully we’ll see his name a lot more often.”

Much of that may rely on the future of Point of Honor, who has impressed her conditioner with a temperament beyond her years thus far, particularly in Sunday’s unveiling.

“It wasn’t a surprise when she went over there and performed the way she did and she really handled everything in the paddock and the post parade,” Weaver said. “She showed the class that she’s always been showing us in the morning.”

Though Point of Honor earned a modest 71 Beyer for her performance, she’s bred to be precocious as a half-sister to juvenile SW Velvet Mood (Lonhro {Aus}) out of a half-sister to MGSP juvenile Capitano (Belong to Me), GSP juvenile Dilemma (Grand Slam) and Mr Freeze (To Honor and Serve), who flashed lofty talent as a 3-year-old this summer when crushing the GIII West Virginia Derby field by eight lengths. Weaver isn’t shy about having expectations for his filly, and he knows this is a good spot on the calendar to take your shots.

“We’ll see how the filly’s doing, but she’s got a nice pedigree and we’ll definitely want to take advantage of any stakes opportunities that present themselves,” he said. “Gulfstream’s got a nice program, Tampa’s across the way there too. At this time of year, any time you have a 3-year-old that can handle going a distance of ground and can run well on the dirt, you’ve got to be thinking about those spots. We think she’s good enough to perform in them, so we’ll be looking at them.”