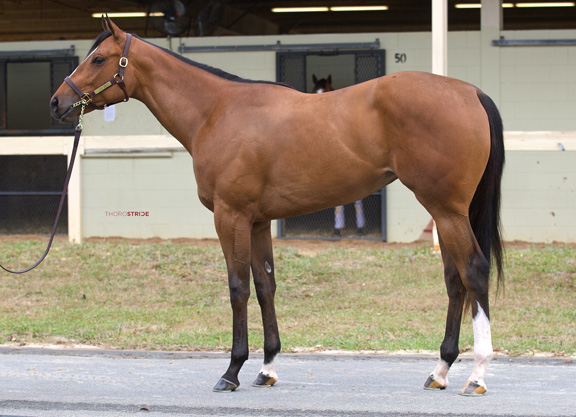 The under-tack show ahead of next week's Ocala Breeders' Sales Company's Spring Sale of 2-Year-Olds in Training reached its halfway point with its third session Wednesday and a filly by Cupid (hip 576) became the second juvenile of the week to work a quarter-mile in :20 2/5. Out of Callipepla (Yes It's True), the bay filly is consigned by Jenn and Quincy Adams's Q Bar J Thoroughbreds.

“That was a 'wow' work,” Quincy Adams said Wednesday afternoon. “She galloped out strong. She's so classy. She is just a princess. She walked back to the barn like an older horse. She's a cool horse.”

“She was just big and scopey and had muscle like she was going to be fast, but also looks like she could get two turns,” Adams said. “She's filled out in all the right places. She has that big hip that everybody likes–that big motor–and she's got a real big slinky walk. She has some scope to her and she's got some size.”

The filly is from the first crop of GI Gold Cup at Santa Anita winner Cupid (Tapit).

“We've had three Cupids and we really liked all of them,” Adams said. “They've all been kind of different, but the biggest thing that I've seen is that they all have good minds.”

A filly (hip 317) by another Coolmore first-crop sire, champion Classic Empire, worked the bullet quarter-mile of :20 2/5 during Tuesday's second session of the six-day under-tack show.

Hip 490, a gray colt by Arrogate (Unbridled's Song), turned in his :10 flat breeze just minutes into the day's session. Out of Ask the Question (Silver Deputy), he is a half-brother to multiple Grade I winner Heart to Heart (English Channel) and was purchased by Dunne for $155,000 at last year's Keeneland September sale on behalf of the pinhooking partnership responsible for last year's highest-priced colt, a $1.25-million son of Quality Road.

“He's been one of our talking horses all year,” Dunne said. “He's just a beautiful horse. He's got the best of both worlds. He's got the stretch and length of an Unbridled's Song and he's got the power of a Silver Deputy. He's a really nice colt.”

Wavertree also sent out a filly by Curlin (hip 594) to work in :10 flat Wednesday. Out of the unraced Catch the Flag (A.P. Indy), a full-sister to Canadian champion Catch the Thrill, the juvenile was purchased privately after RNA'ing for $120,000 at last year's Fasig-Tipton Selected Yearling Showcase.

“The Curlin is a beauty,” Dunne said. “She is as pretty as a picture, a medium-sized filly with a ton of class. She has always worked well and we weren't surprised when she showed up to work today.”

Rounding out the trio of Wavertree's :10 flat workers was hip 530, a son of Runhappy out of Bible Belt (Pulpit). The dark bay colt is a half-brother to graded placed Hardworkcleanlivin (Colonel John). He was purchased by Columbia Bloodstock for $250,000 as a weanling at the 2019 Keeneland November sale before RNA'ing for $120,000 at last year's Keeneland September sale.

Wavertree had one of six juveniles to work in :9 4/5 Tuesday, when hip 253 shared the week's fastest furlong so far. Bred by Brenda and Philip Robertson, the son of Cairo Prince RNA'd for $35,000 at Keeneland last September.

“He's a really cool horse,” Dunne said. “Philip Robertson owns him and he really liked him as a yearling. He drew one of the later books at Keeneland and he wasn't willing to give him away. He figured he would take a shot down here and it looks like he might have been right.”

The majority of Wavertree's OBS March consignment worked quarter-miles at the under-tack show ahead of last month's sale, but an increasing emphasis on gallop-out times prompted Dunne to limit his April consignment to furlong works.

“Regardless of how far a horse works, they want to clock them galloping out from the wire to the five-eighths pole, which is an extra three-eighths of a mile,” Dunne explained. “They just do the gallop-outs by how fast they went, not by how far they went. The horses who go eighths obviously gallop out a better three-eighths than the horses who went a quarter. We had some horses that I thought worked really, really well in March going quarters and they wanted to come back and knock them for how they galloped out. Whereas if they had gone eighths, that wouldn't have been an issue. To my mind, there is no advantage to going a quarter anymore. It's all become too much about what they do after the wire as opposed to what they do to the wire. So that was our reasoning to backing them up.”

In addition to hip 490, Arrogate also had a pair of fillies share Wednesday's furlong bullet. Hip 463, a daughter of multiple graded stakes winner Amen Hallelujah (Montbrook), was purchased for $150,000 at last year's Keeneland September sale by Nice Guys Stables and worked in :10 flat for Mayberry Farm.

Also working in :10 flat, hip 486 is a daughter of multiple Grade I winner Artemis Agrotera (Roman Ruler) who is consigned by Sequel Bloodstock on behalf of Chester and Mary Broman. Her half-brother Chestertown (Tapit) topped the 2019 OBS March sale when selling for $2 million.

Also working in :10 flat Wednesday were:

The under-tack show continues through Saturday with sessions beginning each day at 8 a.m. The Spring sale will be held next Tuesday through Friday with bidding commencing at 10:30 a.m.