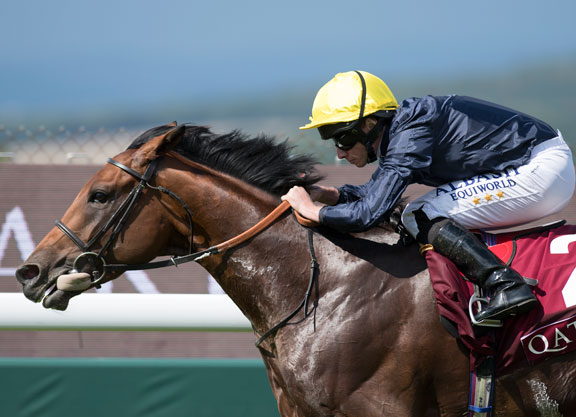 Harry Dunlop is hopeful Knight To Behold can achieve a more consistent level of form in 2019 and said, “He's come out of the winter well. It does look quite a tough race with Crystal Ocean and Thundering Blue in it, but it should be a good starting block for him and we can see where we are.”

In the G2 Bet365 Mile, Addeybb (Ire) (Pivotal {GB}) bids for back-to-back renewals taking on the G2 Celebration Mile and G2 Summer Mile scorer Beat the Bank (GB) (Paco Boy {Ire}) and the Mar. 30 Listed Doncaster Mile winner Sharja Bridge (GB) (Oasis Dream {GB}). As usual, trainer William Haggas is watching the weather. “Things conspired against him last season, we've never had a summer like it since 1976 in terms of the weather. Then when it did rain on Champions Day he wasn't ready for it and I went and ran him on the all-weather at Lingfield which was the wrong track. He needs rain, plenty of it, the word soft must appear in the going description somewhere for him to run. If I hadn't declared him it would probably pour down, but I'll send him and it will probably rain everywhere bar Sandown because that is the way it is. He's in good form and is ready to run, he has been for a bit so he needs to run really.”

In between the older horse action, the G3 bet365 Classic Trial sees some Derby hopefuls pit their wits while the ones at Ballydoyle are away and King Power Racing's Bangkok (Ire) (Australia {GB}) is favourite based on his defeat of the impressive subsequent winner Telecaster (GB) (New Approach {Ire}) in a 10-furlong Doncaster maiden on Mar. 30. Trainer Andrew Balding said, “I've been delighted with him at home and he looks a high-class horse. The only concern I would have is if there is heaps of rain, which it doesn't look like there is going to be.”

Team Valor's recent acquisition Technician (Ire) (Mastercraftsman {Ire}) looked a colt with a bright future when winning over a mile and a half at Leicester on Apr. 5 and trainer Martyn Meade's son and assistant Freddie commented, “It was his first run of the year and you would think he will come on a fair bit for it. The trip and track should suit him at Sandown, so hopefully he will go well again.”

John Gosden has captured the Classic Trial a record nine times and is doubly-represented by Shadwell's blinkered Chelmsford scorer Alfaatik (GB) (Sea the Stars {Ire}) and George Strawbridge's Lingfield winner Travel On (GB) (Lope de Vega {Ire}). “I think they are two nice, progressive, strapping colts,” he said. “I think Travel On is a mile-and-a-half horse, but there's only one trial at that trip and that's at Chester, so I thought he'd enjoy the last four furlongs uphill.” This is also the meeting at which Gosden ran Dar Re Mi (GB) (Singspiel {Ire}) in the 10-furlong fillies' maiden in 2008 and Jack Hobbs (GB) (Halling) in the closing 10-furlong handicap in 2015. Interestingly, he had Taghrooda (GB) (Sea the Stars {Ire}) engaged in the latter contest before opting to withdraw her on soft ground a year earlier, so it is obviously a fixture which he targets with some of his better charges.

His Sparkle Roll (Fr) (Kingman {GB}), a half-sister to Wings of Eagles (Fr) (Pour Moi {Ire}), is the sole representative in the Sir George Martin Memorial Fillies' Novice S. which replaces Dar Re Mi's maiden and the €750,000 Arqana August graduate generated excitement with a clear-cut win over a mile at Haydock in September. If past patterns are anything to go by, she will be headed to the G3 Musidora S. after this so a win would see her draw interest for the Epsom Oaks. Another Kingman runs for the yard in Denford Stud's Private Secretary (GB) in Jack Hobbs's handicap and the homebred half-brother to the G1 St Leger third Michelangelo (GB) (Galileo {Ire}) is a fascinating entry on an informative day.