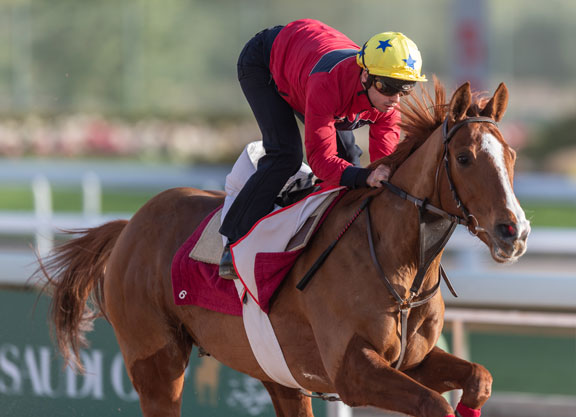 Godolphin's Cross Counter (GB) (Teofilo {Ire}) will break from the rail in his attempt to add yet another rich international prize to his roll of honor in Saturday's $2.5-million Longines Turf H. at Saudi Arabia's King Abdulaziz Racetrack in Riyadh. The 3000 metre event is the richest of the three turf contests on the Saudi Cup card.

Cross Counter has over £3.5-million in the bank and looks to build on his victories in the 2018 G1 Melbourne Cup and 2019 G2 Dubai Gold Cup while making his first start since a credible eighth in the latest renewal of Australia's 'Race That Stops a Nation' in November.

Another who is no stranger to success at international meetings is Freddy Head, and he saddles George Strawbridge's Call The Wind (GB) (Frankel {GB}) off a trio of runner-up efforts in group company last fall. Call The Wind will break from gate four.

“I'm very happy with the horse and very happy to be here,” Head said after watching his Group 1 winner train at Riyadh on Wednesday. “He did a seven furlong canter this morning. He is fit and all the work has been done at home.”

One slot to Call The Wind's inside will be the fellow French-trained Called To The Bar (Ire) (Henrythenavigator), who was put through his paces on Wednesday by Joakim Brandt, husband of trainer Pia Brandt.

“He is in great form,” Joakim Brandt said. “He came here on Sunday and everything is going alright. He ran a good race in Hong Kong and seeing that he likes good ground it made sense to bring him here.”

Joseph O'Brien joined Freddy Head in the elite ranks of having both ridden and trained winners at the Breeders' Cup last November when Iridessa (Ire) (Ruler of the World {Ire}) took the GI Filly & Mare Turf, and O'Brien sends out a pair here in Downdraft (Ire) (Camelot {GB}) and Twilight Payment (Ire) (Teofilo {Ire}), who are drawn alongside one another in gates eight and nine.

Brendan Powell, assistant trainer to Joseph O'Brien, said, “The horses arrived on Tuesday morning and just had a trot around. We just did a four and a half furlong canter on the training track [on Wednesday]. I will speak to Joseph later today and discuss with him if we'll bring them to the turf track tomorrow morning. Both of these horses had their last run in the Melbourne Cup and they have travelled over here well from Ireland.”

Prince of Arran (GB) (Shirocco {Ger}) likewise looks for another international win, having taken a Group 3 in Australia each of the past two seasons, and Charlie Fellowes's 7-year-old landed in gate two.

Fellowes reported from Newmarket, “He has travelled as well as expected for an old pro like him. He has taken well to his new surroundings and his temperature is good. He has done a couple of canters and the team there have been pleased with him. I am flying out later today and look forward to seeing him on the track tomorrow.”

The Saudi Cup will be shown live on Sky Sports Racing and Racing TV.