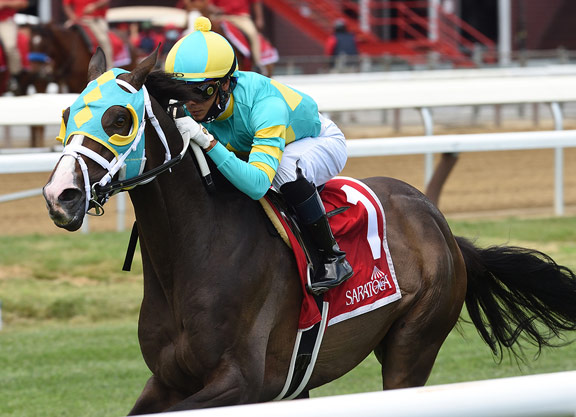 “He ran another big race last time and was flattered the other day by Colonel Liam,” trainer Mike Maker said. “We expect another strong effort from him.”

Cross Border was second over the Gulfstream course in last year's 1 1/2-mile GIII W. L. McKnight S. and inherited his first graded win when Sadler's Joy (Kitten's Joy) was disqualified from the victory in the GII Bowling Green S. at Saratoga last summer.

“He's run well here, but he shows up everywhere,” Maker said. “He's a horse that never disappoints and loves his job.”

Sadler's Joy will need to snap a nine-race losing streak if he is to win his second Pan American Saturday. The 8-year-old veteran earned his first graded victory in that race in 2017. He was most recently fourth in the Jan. 23 McKnight.

“He's doing as well as ever, so hopefully we'll get another good trip out of him and go from there,” trainer Tom Albertrani said. “We just keep him on a regular routine, training-wise. You look at his work tab and you don't see the fancy, fast works or anything; just normal, kind of routine works just to keep him ticking over between races.”

Last year, Sadler's Joy went 0-for-8 with third-place finishes in the GII Mac Diarmida S. at Gulfstream and GI Joe Hirsch Turf Classic and GI Manhattan S. at Belmont Park. He was disqualified from first to fourth for interference in the Bowling Green.

“If he wasn't in the barn, it'd be pretty strange. When that day comes, it's going to be a sad day when we don't see him walking down the shedrow anymore,” Albertrani said. “He's just been one of those types of horses that tries every race. He puts everything into every time he runs and its' just a pleasure having a horse like that.”

Trainer Bill Mott will be seeking his seventh Pan American win when he saddles Summer Wind Equine's Moon Over Miami (Malibu Moon). The 4-year-old is coming off a troubled third-place finish in the Feb. 27 Mac Diarmida.

“His last race was a mile and three-eighths and he was finishing up very well when he finally got out, which was a little late in the game,” Mott said. “He came running and got up for third and deserves a chance in the Pan American. I think he's going to turn into a useful horse going that trip.”

“We stretched him out at Kentucky Downs last fall in their derby and he won that,” Mott said. “That was a little longer race. He doesn't seem to run the turns real well, so it seems like the slower pace of the longer races helps him get around the turns a little better.”