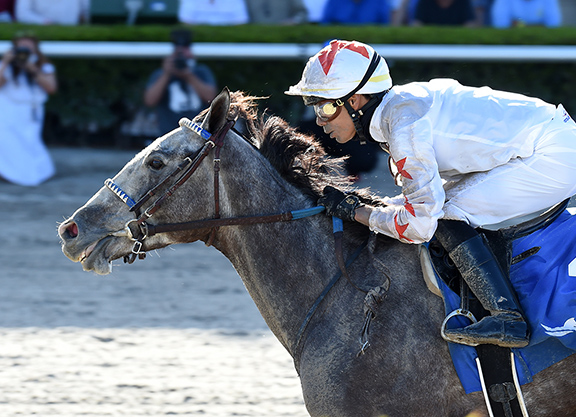 Four-time stakes winner Crazy Beautiful (Liam's Map), who raced once on turf in her career debut, will return to the lawn Friday at Keeneland in an extremely deep renewal of the GIII Rubicon Valley View S. for 3-year-old fillies going 1 1/16 miles on turf.

Running away to a 3 1/2-length score first out on the Ellis turf last summer, the gray repeated by 3 3/4 lengths in the Runhappy Debutante S. on dirt there to earn 'TDN Rising Star' honors before recording runner-up finishes in the GIII Pocahontas S., GI Darley Alcibiades S. and GII Davona Dale S. Back in the winner's circle after a score in the GII Gulfstream Park Oaks, the $250,000 Fasig-Tipton October grad has added victories in the GII Summertime Oaks, GIII Delaware Oaks and last out in the Seneca Overnight S. Oct. 1 at Churchill.

A fellow 'Rising Star', Tobys Heart (Jack Milton) is looking for her third stakes triumph and first going a route of ground. A dominant 6 3/4-length debut maiden winner despite early trouble last June at Churchill, the $45,000 OBS March bargain backed that up with a success in Saratoga's Bolton Landing S. and annexed the Limestone Turf Sprint S. over this course Apr. 9. Winless in her next three starts, she was last seen cruising to a 2 3/4-length victory with a field-high 92 Beyer in the Nelson's Green Brier Whiskey Music City S. over 6 1/2 furlongs at Kentucky Downs Sept. 12.

It speaks to the depth of this field that an undefeated Grade I winner in Lady Speightspeare (Speightstown) is pegged at 10-1 on the morning line. Also earning a 'Rising Star' badge thanks to a 3 3/4-length score debuting at seven furlongs on the Woodbine grass last August, the Chuck Fipke homebred validated that distinction with a conquest of the GI Natalma S. as the favorite less than a month later. Forced to the bench for nearly a year, the chestnut returned to capture a Woodbine allowance/optional claimer by two lengths over this distance Sept. 6.

Streaking Queenship (Ire) (Excelebration {Ire}) adds European flair to the field, making her North American debut for trainer Joseph O'Brien. Third at 14-1 when unveiled over six furlongs on all-weather last November at Dundalk in Ireland, the bay graduated by a head when stretching out a furlong there next out and took a handicap event by five lengths in her first turf try Apr. 7 at Gorwan Park. Facing males in her initial stakes attempt, she scored a half-length victory in the Navigaton S. Sept. 28 at Cork.

Another recent Euro import rates a big chance in Breaker of Chains (Bernardini). Third after a slow break debuting over a mile July 18 at The Curragh, the $30,000 Keeneland November buy improved a spot against males over nine furlongs on soft ground at Leopardstown Aug. 5 and rallied from last to first for an impressive maiden win with an 89 Beyer Sept. 11 at Kentucky Downs.