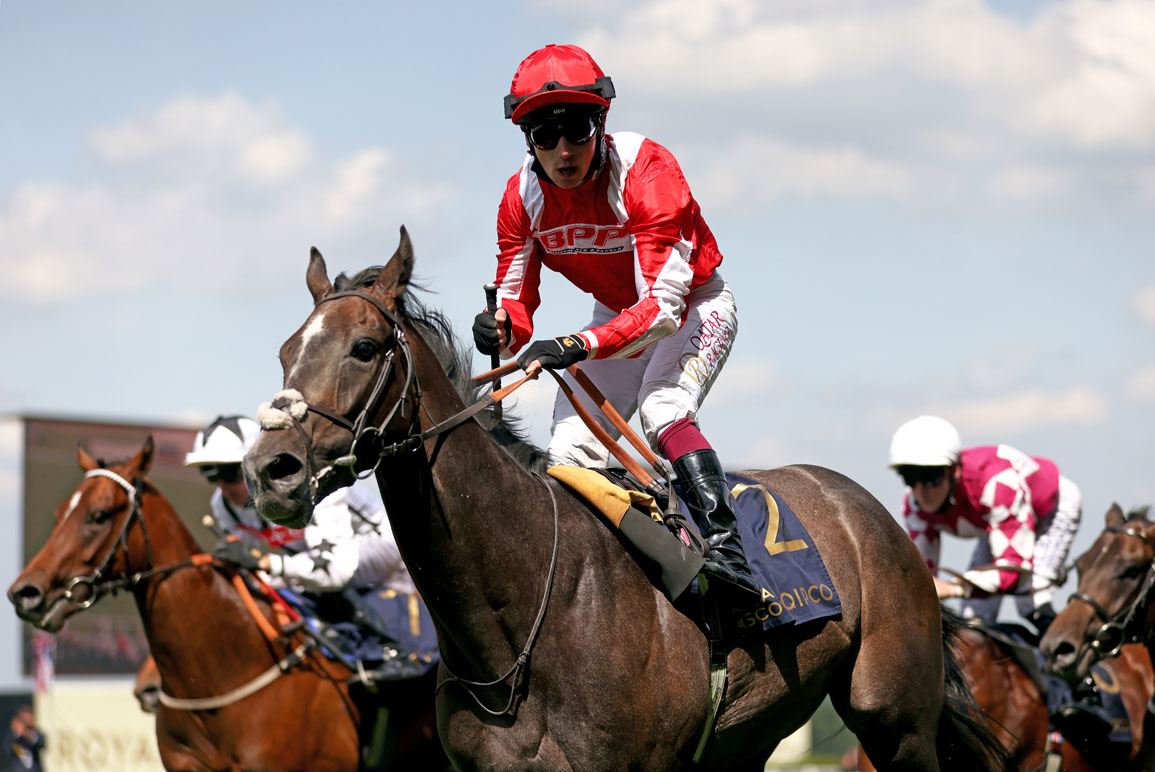 Leaving it late on debut when scoring over an extended five furlongs at Newbury Apr. 16, Berkshire Shadow (GB) (Dark Angel {Ire}) was again one of the last on the scene as he swooped to conquer in Tuesday's G2 Coventry S. First time up, the winner had spotted subsequent TDN Rising Star Gisburn (Ire) (Ribchester {Ire}) several lengths headstart with his tardy break before showing his class. With the strong tempo in part carved out by Gregory Kaufman's Kaufymaker (Jimmy Creed) and this more suitable trip to aid him, he was always likely to find a more even rhythm despite being a touch slowly away drawn like Palace Pier (GB) (Kingman {GB}) closest to the stand's side. Keen for a few strides before settling for Oisin Murphy towards the back, the 11-1 shot was delivered to reel in the 25-1 shot Vintage Clarets (GB) (Ardad {Ire}) with half a furlong remaining and assert for a 1 1/4-length success. It was the 66-1 outsider Eldrickjones (Ire) (Cotai Glory {GB}) who snuck a neck ahead of Vintage Clarets at the line. “He's a special horse who was bought inexpensively by Andrew and his mother,” the winning rider said. “It was an incredible performance on his second start and he looks a big immature horse, so he has a very good future.”

Bred by Cheveley Park Stud, the rare bargain by Dark Angel Berkshire Shadow is one of those who will make the movers and shakers at the public auctions place their heads in their hands. His remarkable price tag is all the more so given that he is a grandson of Ballymacoll's brilliant Islington (Ire) (Sadler's Wells), with the useful dam Angel Vision (Ire) (Oasis Dream {GB}) having won a Newmarket handicap and finished under four-lengths sixth in the same silks in the G3 Atalanta S. Officially rated the best of all foals produced by the four-times group and grade I-winning Breeders' Cup Filly & Mare Turf champion, she was bought by Cheveley Park for 600,000gns out of the Ballymacoll dispersal at the 2017 Tattersalls December Mares Sale. Berkshire Shadow's owner Paul Spickett, whose colours are also carried by last year's G1 St Leger runner-up Berkshire Rocco (Fr) (Sir Percy {GB}), is not anywhere near that league but he has at least temporarily moved into a different sphere with this result. “From 12 years old, I wanted horses so it's a brilliant day,” he said. “To be told seven years ago that I'd even have an Ascot runner would be more than enough, but to have a winner is unbelievable. He was bought for my wife, who loves greys, but we were worried he was a bit too cheap being a Dark Angel. Luckily, too cheap was good enough!”