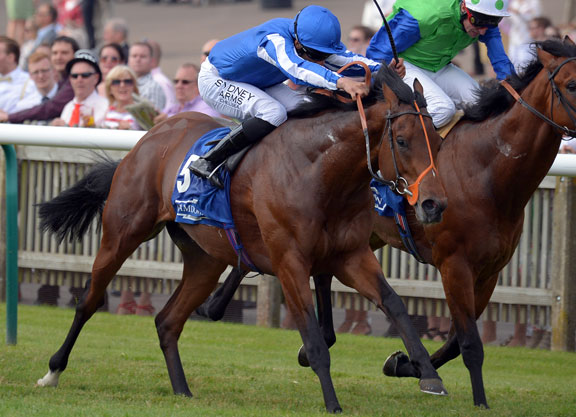 Rathasker Stud in Kildare will welcome a new addition to their stallion roster for 2017 having snapped up multiple stakes winner Coulsty (Ire) (Kodiac {GB}–Hazium {Ire}, by In The Wings {GB}). The 5-year-old has been a grand campaigner for Richard Hannon and his owner Lord Vestey winning five races from 25 runs and finishing in the top three a further eight times. “Coulsty is an exciting commercial prospect for our clients – a high class group winning sprinter by leading sire Kodiac, from a family full of speed and precocity with exceedingly good looks to match,” said Rathasker's Maurice Burns.” As a racehorse Coulsty proved quite adaptable in terms of trip and ground, winning the G3 Prix de Meautry over six furlongs at Deauville on soft ground and followed up in a listed race at Leicester over seven furlongs on good to firm ground on his next start. Paying tribute to his former protégé Richard Hannon commented, “Coulsty has been a pleasure to train, a high class sprinter, the model of soundness and honesty.” Bred by Peter & Sarah Fortune Coulsty was purchased as a yearling by Sackville Donald for 57,000gns at Tattersalls. Recalling him as a youngster Ed Sackville said, “Coulsty was a magnificent yearling with size, strength, quality and great movement.” These thoughts were echoed by Paul McCartan who pinhooked him as a foal, “Coulsty was a cracking foal – very balanced, standing on great limbs and had a terrific walk,” said McCartan. Coulsty joins Anjaal (GB) (Bahamian Bounty {GB}), Clodovil (Ire) (Danehill) Bungle Inthejungle (GB) (Exceed And Excel {Aus}) and Es Que Love (Ire) (Clodovil {Ire}) at Rathasker and a fee will be announced at a later date.