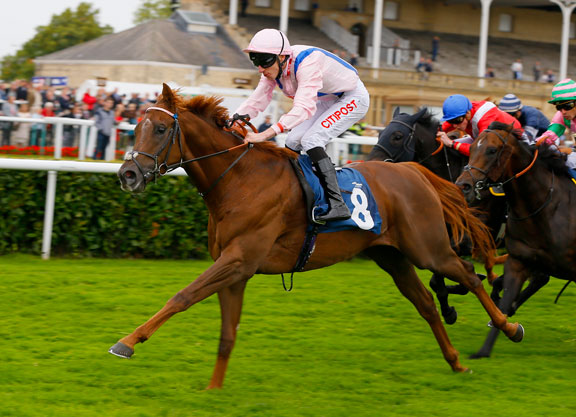 Group 3-winning sprinter Cotai Glory (GB) (Exceed and Excel {Aus}) will retire to Tally-Ho Stud in 2018, where he will stand for €6,000. The winner of the G3 Molecomb S. at two in a track-record time for a 2-year-old, Cotai Glory also added last year's G3 Dubai International Airport World Trophy S. He was twice Group 1-placed, in last year's G1 King's Stand S. and this year's G1 Nunthorpe S. Trainer Charlie Hills described Cotai Glory as “the fastest 2-year-old I've ever trained,” and Tally-Ho's Tony O'Callaghan said, “We have been following Cotai Glory ever since he broke the 2-year-old track record at Glorious Goodwood over five furlongs in the Molecomb and we are delighted to have secured him. With Danetime and Kodiac we have already enjoyed a lot of success at Tally-Ho with Danehill- line stallions and we very much feel that Cotai Glory ticks all the boxes. We will be supporting him strongly over the coming years.”