Copano Rickey Goes Out a Winner 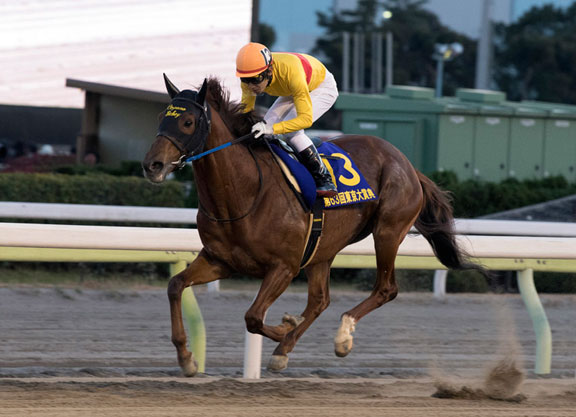 Following in the hoofprints of Isla Bonita (Jpn) (Fuji Kiseki {Jpn}) and Kitasan Black (Jpn) (Black Tide {Jpn}) over the course of the last week, Copano Rickey (Jpn) (Gold Allure {Jpn}) signed off victoriously on a wildly successful career, winning Friday's G1 Tokyo Daishoten in gate-to-wire fashion to secure his spot as one of Japan's best dirt horses in history.

Drawn gate 13 in a full field, Copano Rickey was perhaps a beat slow from the stalls, but soon recovered to cross and clear all of the inside traffic to lead passing under the wire for the first time as the blaze-faced K T Brave (Jpn) (Admire Max {Jpn}) gave chase from second. Well-rated by Hironobu Tanabe through the middle stages, Copano Rickey kicked further in front off the final corner and was never in serious danger. Sound True (Jpn) (French Deputy), winner of this event in 2015, ran on well from the second half of the field to grab second ahead of K T Brave and defending champion Apollo Kentucky (Langfuhr).

Copano Rickey concludes his career with 13 black-type victories, including back-to-back scores in the G1 February S. (1600m) in 2014 and 2015. Only 14th when contesting that event for the fourth straight year this past winter, the 7-year-old was last seen finishing third in the G1 Champions Cup at Chukyo Dec. 3.