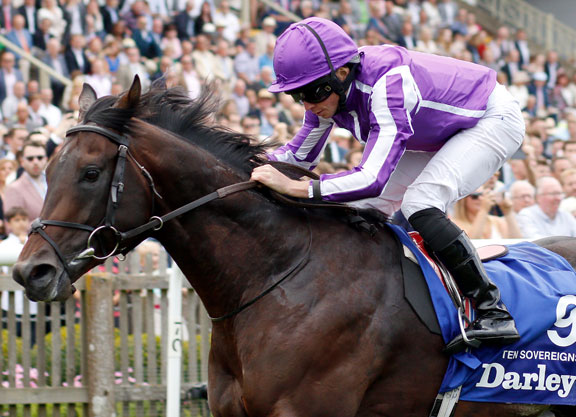 Every year there is huge excitement as the new wave of first-season sires is announced. After those announcements come the visits to the various studs that house new recruits in eager attempts to see racehorses that caught the eye on the track and potentially mate up that mare that had been penciled in.

Coolmore Stud in Fethard, Co. Tipperary, is always high on the list for breeders not only for the bloodlines it is home to, but also for a peek at the impressive facilities and the empire that has been built over the years.

All three stallions boast impressive racecourse CVs, with Ten Sovereigns and Magna Grecia being Group 1 winners at two and three and Calyx being a notable winner of the G2 Coventry S. at Royal Ascot only 10 days after an eye-catching maiden performance in ‘TDN Rising Star’ fashion.

Ten Sovereigns was also a ‘TDN Rising Star’ on debut, and Coolmore’s Director Of Sales David O’Loughlin said, “Ten Sovereigns was a fantastic horse. He was unbeaten at two; he won his maiden by six lengths at The Curragh. He then went on to Newmarket for the Middle Park, which he won very comfortably, and he came back to Newmarket then as a 3-year old and won the July Cup. He beat a very strong field again. The second and third won five Group 1s between them.”

The form lines between all three new horses’ races are strong, with Coolmore’s Mark Byrne keen to point out the strength of the fields Magna Grecia beat.

“Form is very significant because it’s all we can relate to and it’s how we can substantiate a good race horse,” Byrne said. “Magna Grecia beat Phoenix of Spain (Ire) and Circus Maximus (Ire) at two, fighting for the [G1 Vertem] Futurity, and he won the [G1 2000] Guineas where he beat King of Change (GB), who subsequently went on to win a Group 1 himself.”

Although Calyx’s career was short-lived, he caught the imagination of many being one of the first winners for Kingman (GB) and by winning the G2 Coventry S. in extraordinary fashion. It wouldn’t be out of the question to think Ten Sovereigns and Calyx could have met on the racecourse at some stage and a match between the two would have been tantalizing given that both have left similar foes in their wake.

“Calyx won his maiden first time out by five lengths and then, only 10 days later, he went on to win the Coventry S. beating the triple Group 1 winner Advertise (GB),” said Coolmore’s Hermine Bastide. She also pointed to the fact that Calyx, being out of a daughter of Observatory, is free of the blood of many of the lines that so deeply permeate the Coolmore roster and as such, the European breed.

“Calyx is by Kingman which is a very, very exciting young sire, so we’re very lucky to have him,” Bastide said. “Calyx is very important to us because he is completely free of the blood of Sadler’s Wells, Galileo and Danehill.”

Calyx’s pedigree has plenty of strength on the bottom side, too. His dam, Helleborine (GB), won the G3 Prix d’Aumale at two and is a full-sister to the G1 Sprint Cup winner African Rose (GB).

“Calyx is out of a 2-year-old Group 3 winner who is also a full-sister to a French champion sprinter, so his pedigree contains a lot of speed and a lot of class, just like Calyx himself,” Bastide added.

Magna Grecia and Ten Sovereigns also have strong merits on pedigree. Magna Grecia is by Invincible Spirit (Ire), who is proving a potent force as a sire of sires and out of a Galileo (Ire) mare; Galileo is also the broodmare sire of last year’s break out first-season sire Night Of Thunder (Ire).

“Magna Grecia is by the hottest young sire of sires in Invincible Spirit, which means he’s a paternal half-brother to Kingman,” Byrne said. “And of course he’s out of a Galileo mare, which is the same influence that Night of Thunder has had, and he has got off to a brilliant start at stud. It is an outcross for a lot of our Sadler’s Wells mares, which is something that were getting more focused on.”

Ten Sovereigns hails from a sire line that is on the rise within the Coolmore ranks and is catching the attention of commercial breeders worldwide. O’Loughlin recalled just how far back the connection with that particular line stems. “He’s the first son of No Nay Never to go to stud. No Nay Never has been a huge success; he’s one of the most popular commercial sires. No Nay Never was sent over by Wesley Ward from America. He’s by Scat Daddy, a horse we stood at Ashford. Scat Daddy was by Johannesburg, a champion 2-year-old trained by Aidan [O’Brien] at Ballydoyle. Johannesburg was by Hennessy, who we stood at Ashford, and he was by Storm Cat, who we had a connection to over the years and was very successful for us, particularly with Giant’s Causeway.

“So it’s a line we’ve worked with for a long time. It really suits Europe. It brings speed, consistency and toughness.”

While many hope to breed a champion and many more hope to strike gold in the sales ring, breeders are sure to find what they require after a visit to Coolmore’s headquarters. For these three new lads, life at the home of champions has just started but with looks, race records and pedigrees that stand out there should be no shortage of mares through the next few months.